Home » All Reviews » Review – A Gamble Of Gods (The Order Of The Dragon, #1) by Mitriel Faywood 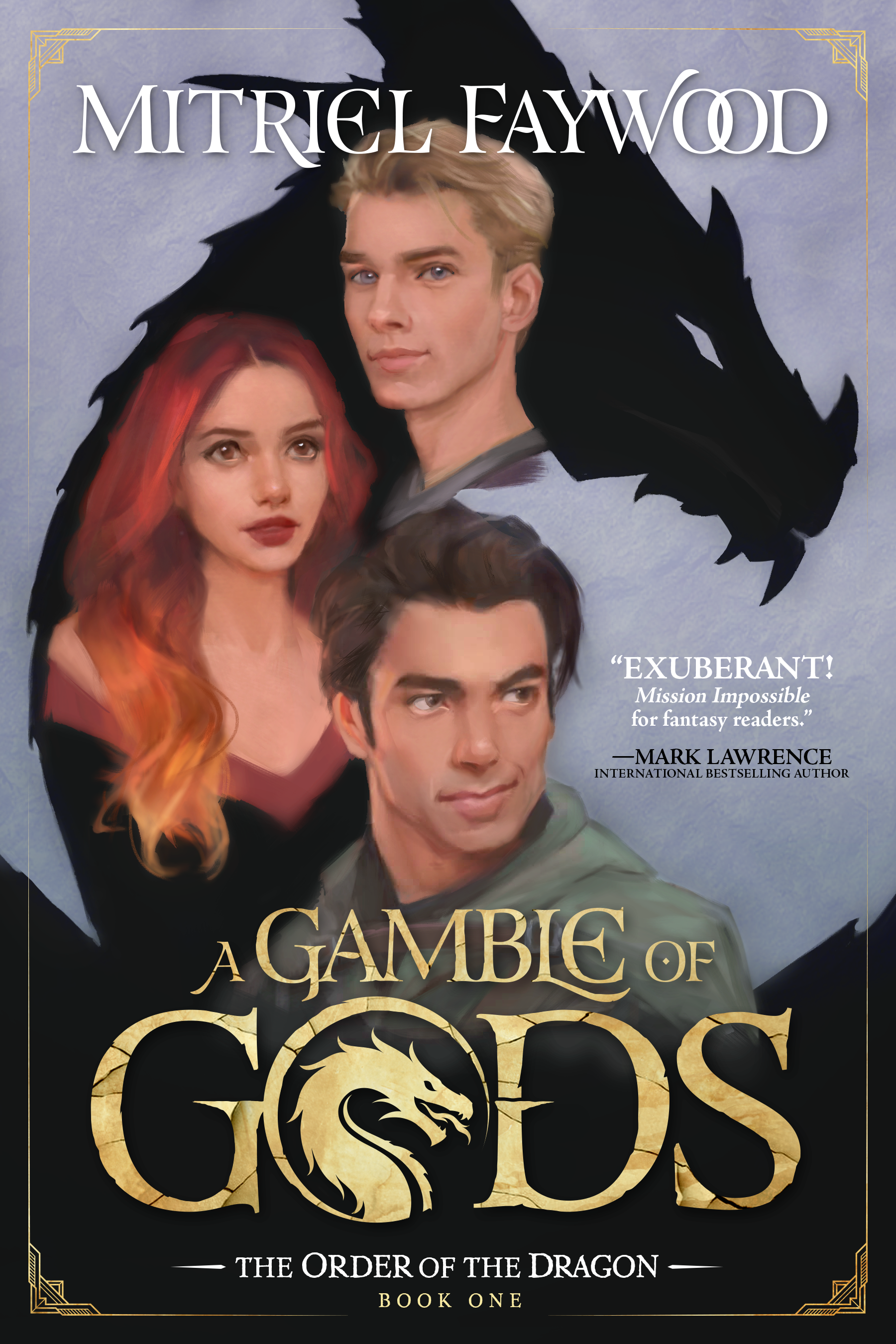 A Gamble Of Gods, the debut release from Mitriel Faywood, is a high-quality, action-filled mix of fantasy and science fiction. The novel is tight, polished, full of humour, and features many exciting and memorable set pieces.

Throughout A Gamble Of Gods, we mainly follow the point of view perspectives of three main characters, each of which are from different timelines in history (and planets too). Kristian is essentially the main character and he is a sort of advanced technology lecturer at an educational establishment in the year 5102. Conor, another key player (pun totally intended), is a womanising, infamous adventurer from the Kingdom of Coroden, and we meet him in the year 1575. The final member of this ensemble is Selena, a seemingly average young lady who struggles with her mental health and finding her place in the world (which in this instance is Earth, 2037).

Creating a cohesive story that combines a classic fantasy world/setting, an extremely high-tech far future, and a familiar almost present reality should not work, it shouldn’t gel and it should be too disjointed and awkward. Faywood’s a proficient writer who took a gamble with this concept and it works in an admirable fashion in A Gamble Of Gods.

As the story progresses, the main characters’ paths cross, initially, in bizarre and exhilarating fashion. The three characters have a unique connection. An empathetic, deep bond that transcends boundaries and possibilities, leading them to really care for, and want to support each other. This bond, I believe, explains two criticisms I could have had with A Gamble Of Gods if I hadn’t analysed it this way. Firstly, the three point of view perspectives are each in the first-person, and althought this works well and they are distinct for the majority of the novel, a similar charisma, wit, banter and mannerisms can sometimes be seen across all three. That being said, this could be down to their bonds and their shared feelings and experiences. To me, at least, sometimes the characters’ voices blended slightly. Another potential issue is that when these characters do travel to alien and absolutely different realities to which they are used to, they aren’t as shocked and amazed as I would be personally, and, again, the reasoning I put behind this is their unity and shared understandings through their special relationship making the transitions more bearable.

I had a really enjoyable reading experience with A Gamble Of Gods and I was excited every time I picked it up to see where this story would go next. There are elements of romance, advanced technology, high fantasy warfare, royal curses, and, most importantly, a talking animal sidekick! The novel features some intense showdowns, political maneuverings, and it contains a few dungeon-crawling segments that reminded me of some LitRPG favourites of mine.

A Gamble Of Gods is the first entry in Faywood’s The Order Of The Dragon series and even though this novel is self-contained, the fact there are many more adventures to be had in the author’s well-crafted worlds is a very exciting prospect. Faywood shines throughout A Gamble Of Gods, there’s a great amount of talent that is fully on show here and I’m intrigued to see where she goes next with this addictive science fiction fantasy adventure.

I received a review copy in exchange for an honest review. Thank you to Mitriel Faywood.