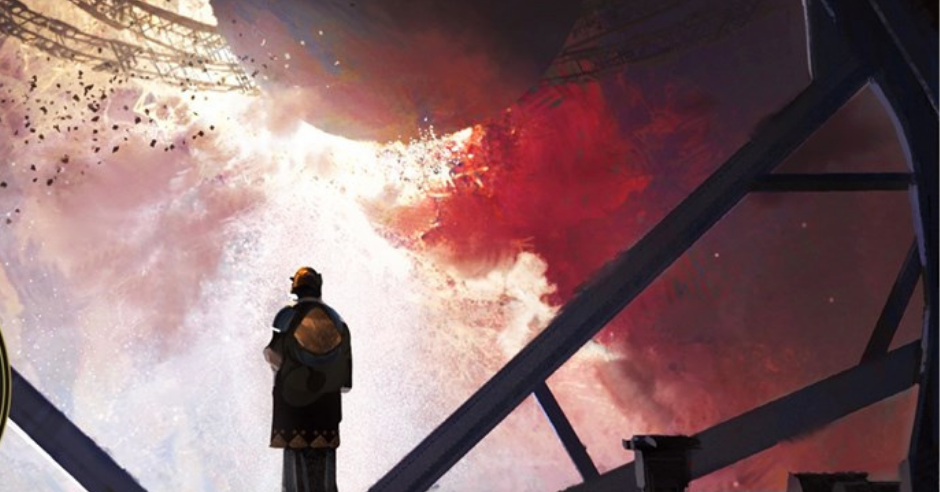 By Beth TablerSeptember 4, 2022No Comments

“she’s a barbarian, don’t hold that against her”

An alien armada lurks on the edges of Teixcalaanli space. No one can communicate with it, no one can destroy it, and Fleet Captain Nine Hibiscus is running out of options.

In a desperate attempt at diplomacy with the mysterious invaders, the fleet captain has sent for a diplomatic envoy. Now Mahit Dzmare and Three Seagrass—still reeling from the recent upheaval in the Empire—face the impossible task of trying to communicate with a hostile entity.

Whether they succeed or fail could change the fate of Teixcalaan forever.

“and—bleeding starshine, if she pulled this off she was going to write her very own epic poem about herself”― Arkady martine, a desolation called peace

A Desolation Called Peace, Arkady Martine’s next installment in the Teixcalaan following her Hugo award-winning novel A Memory Called Empire is just as culturally rich and profound as A Memory Called Empire was. Still, instead of focusing the guts of the story on the understanding of what memory is, A Desolation Called Peace focuses on how we communicate.

“On the flagship Weight of the Wheel:
“You’d have to ask medical,” said Two Foam.
“Someone ask medical,” said Mahit. “I can’t talk to anyone. I’m not a citizen.” And she smiled, terrifying and far too beautiful with all those teeth exposed, gesturing to her entire lack of cloudhook.”

Arkady Martine quoted in the first book, “This book is dedicated to anyone who has ever fallen in love with a culture that was devouring their own.” The first novel, A Memory Called Empire, was about the power of memory and specifically what memory is. Cultural memory can devour and expand inside of you and push the “you” out and replace it with a new transformed you.

This abstract idea was wrapped in an exciting murder mystery that kept the story moving and gave it an understandable hook for readers to latch on to. Desolation is about memory again, but I think it expands on the idea of how memory is expressed through language and communication. This time the grander idea is wrapped in an exciting first contact story between two disparate creatures.

The story starts up right at the end of the first book. We have a huge looming threat of an advancing alien empire that is both figuratively and in some cases literally devouring up the edges of the Teixcalaan Empire. As this is a first contact story, no one knows who or what these aliens are. I applaud Martine for her description of the aliens. Often, writers create aliens that have some sort of likeness to humans so that readers can empathize and understand them. I get that.

However, if you think about aliens in a real sense and how infinite the universe is, they could be anything. Douglas Adams made me think hard about this when he created a planet with living mattresses wallowing around in the muck.

“She’s a barbarian, but don’t hold it against her. She’s brilliant.”

We cut back and forth between Nine Hibiscus, the yaotlek of the campaign, Mahit Dzmare, and the newly appointed Undersecretary to the Minister of Information Three Seagrass. Three Seagrass was Mahit Dzmare liaison in the first book. Also, we have the young perspective of young Eight Antidote, the clone of the previous employer who is very much like his predecessor, but with notable differences. Each of the characters represents a different perspective on the aliens and how they will affect the future.

Mahit Dzmare is back on Lsel station. In the first novel, we learn that she has a faulty imago machine, courtesy of the ministry. They would like her to download herself to be stored, but they will know that she has an updated imago machine if she does that. She is in a politically tricky position. The ministry would like her line terminated and probably her as well.

Three Seagrass is at home in the shining city when she learns of the alien issue. She decides that she needs to get to Mahit post-haste to work together on the first contact problem and understand what the aliens want. This allows Mahit to leave the station and accompany Three Seagrass to the Weight of the Wheel, the Teixcalaan flagship.

I had a difficult time with this part of the story. Yes, Mahit Dzmare and Three Seagrass are a great pair to work on this problem. But, the first contact with an alien species is such a complicated conflict. Martine sped through a bit of that. I am reminded of the movie “The Arrival” and this scene specifically:

“Dr. Louise Banks: So first, we need to make sure that they understand what a question is. Okay, the nature of a request for information along with a response. Then, we need to clarify the difference between a specific “you” and a collective “you”, because we don’t want to know why Joe Alien is here, we want to know why they all landed.

And purpose requires an understanding of intent. We need to find out: do they make conscious choices? Or is their motivation so instinctive that they don’t understand a “why” question at all? And, and biggest of all, we need to have enough vocabulary with them that we understand their answer.”

I felt like much of the ideas of collective “you” and understanding intent were skipped. I understand that A Desolation Called Peace is a weighty novel as it stands, and some streamlining was necessary. Also, Martine does explain the process that Mahit and Three Seagrass go through when dealing with the aliens, but it seemed just a touch too easy for a first contact scenario.

Along with the deep political intrigue betwixt the characters, there is significant character development in all of them. Young Eight Antidote begins to get first-hand experience in politics and protecting its people and culture. Mahit starts to develop a deeper and more complex symbiotic bond with Yskandr. And while they are two separate people, they begin to meld and share ideas. This character development is in service to the overarching plot and the discussions about what communication is and what part language and memory plays in it.

Mahit’s experience on Teixcalaan has been invaluable. It has allowed her eyes to be opened up to worlds outside of her own. This, in turn, has allowed her to see her own culture with a critical eye. Does that make her dangerous to Teixcalaan or Lsel station? Possibly. I think her new perspective on things is one of the most exciting parts of this story.

I am looking forward to seeing where Martine takes hers and Three Seagrass’s character.

The story continues and gets vastly more complicated. The aliens are a terrifying threat, and all of the characters, including a couple of new ones, are tested mentally and emotionally. Everything comes together in an unexpected climax.

Secondly, the word desolation is “anguished misery or loneliness.” Much like how Mahit feels at the beginning of the book. I found that more in-depth and particular word choice is found throughout this book, and I am quickly coming to associate this kind of next-level writing with Arkady Martine.

Upon further research, the title of the story is seemingly based on one of Tacitus’ speaking about Calgacus, “To ravage, to slaughter, to usurp under false titles, they call empire; and where they make a desert, they call it peace.” It is no shocker to me that the title A Desolation Called Peace would have historical significance. Arkady Martine is a historian, and the detailing and worldbuilding reflect that upon each page.

Every piece of this story flows and melds into others. It is an exquisitely written book. Martine is a master at language, character building, and history, and that mastery is evident in every facet of the story.

A Memory Called Peace was an excellent book, wholly deserved of the awards and acclaim it has received. But that was Martine’s debut. It feels like now, with Desolation Called Peace, Martine is settling into her groove. I will read anything that she writes; her work is that good, and I recommend it to any science fiction or political intrigue lover.