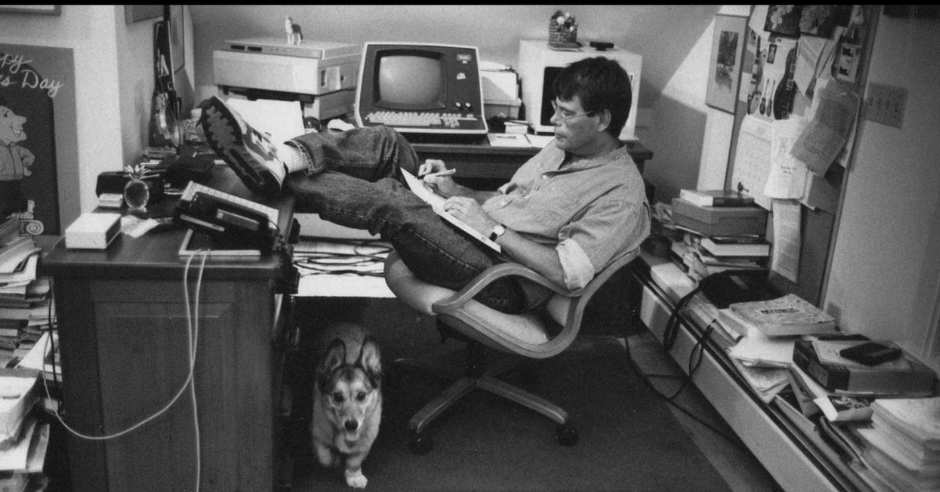 By Beth TablerOctober 18, 2021No Comments

“Books are a uniquely portable magic.”

Amid any Stephen King fan’s pile of books, you’re likely to encounter a small, unassuming nonfiction volume: On Writing. The meta-book sees Stephen King writing about the craft itself. It’s become an indispensable reference for writers of all sorts–aspiring, up-and-coming, and seasoned alike.

For readers, though, On Writing might stick out as a skippable stop on a Stephen King pilgrimage. Just ask my sister, who documents her journey through the King pantheon on our shared Tik Tok account, BookRush. She has no plans to read On Writing, opting instead to read King’s myriad fictional tales.

I’m not here to judge. There’s nothing wrong with preferring King’s spooky-scary-supernatural work to his nonfiction. But On Writing delivers a thorough, breezy look at the craft. Even if you aren’t a writer, you stand to gain a lot from King’s memoir/how-to hybrid. On Writing will make you a better reader.

On Writing’s first half serves as a memoir. King recounts tales from his upbringing that shaped his experience as a writer. Outright instructions can’t be found here. It reads like a series of King short stories a lá Different Seasons or any of his other collections. For King fans, it provides a look at the master’s life without the lens of the supernatural. One story–my personal favorite of the bunch–involves an exposed derriere and an unfortunate mishap with poison ivy.

King’s nuggets of wisdom, though couched in his childhood memories, can shape the way you read. In these snippets, King showcases how a writer’s experience can mold a person. Through tragedy, comedy, and hardship, writers hone their craft. Whether or not they do it overtly, writers imbue their stories with experience. The sheen of fiction may obscure the message or warp it to fit the narrative at hand, but readers can better understand a work if they get glimpses–veiled by fiction or not–into a writer’s psyche.

On Writing removes the extra steps. Selective editing makes for punchier stories, but King still lays his life bare for readers in On Writing’s first chunk. When you understand the experiences that shaped King as a writer, you’ll begin to grasp how he (and other writers) can craft a character.

Hot on the heels of your On Writing journey, you’ll begin to see telltale signs of impressively written character development. For a hundred pages and some change, King welcomes you into his world, explaining how his experience formed him. And even if you’re not a writer, you can learn a lot.

Tools of the Trade

Eventually, King’s childhood reminiscing gives way to the juicy stuff. The craft itself. On Writing’s back half tackles King’s tips and tricks for honing your written voice and mechanics in the form of actual, tangible evidence readers can look for in a good book. Whether you’re a reviewer, a Booktoker, or just a for-fun reader, On Writing can teach you about the bones of a book. How does language function to tell a story? What triggers that knee-jerk “This is bad” response in a reader?

Turns out King’s list of dos and don’ts, codified in this book, are an exquisite barometer. On one hand, examples as simple as “avoid adverbs” serve as easy ways to measure a writer’s skill as you’re reading their book. You’ll notice I took this tip to heart and used precious few of the “-ly” monstrosities in this piece. Little mechanical flourishes don’t always make or break a book, but they can signal the reader with important messages.

a writer’s first outing overflows with clunky adverbs or similar unfortunate stylistic choices, you’ll notice it more after you read On Writing. Will you suddenly hate books you otherwise would’ve adored? No. But On Writing offers tips and tricks that are just as useful to the savvy reader as they are to writers. And if you want to add some tools to your critical reading arsenal, King has them in spades.

A larger example comes in the form of thinking outside the box. King lays out a story–one of a couple in turmoil, their relationship disintegrating into violence and fear. It’s utterly believable and feels inspired by real-life events. But then King challenges writers to reverse the dynamic of the relationship and make the victim the abuser.

Start from scratch with those roles reversed, King asks, and see where the story takes you. This exercise allows writers to explore character and to feel out the natural actions a well-honed cast member might make.

For readers, suggestions like these can work as narrative scavenger hunts. As you’re reading about your favorite protagonist, identify those moments that feel real, or at least true to the character.

It may not feel different right away. But I noticed a marked shift in how I understood characters after I read On Writing. And on the other hand, I felt a pang of regret when a character moment felt forced, or when a writer railroaded their protagonist into a choice that didn’t resonate with the development leading up to it.

For every regretful moment, however, you’ll have a glorious one. A revelation of sorts. You’ll begin to understand what drives your favorite characters, and you’ll latch onto the choice they make–good or bad–because they resonate. They hit different.

On Reading On Writing

Though I’m a writer of sorts–a journalist, a book reviewer, and a pithy slack message sender (just ask my pals at TheQuillToLive; if they tell you I’m not funny they’re lying), I found joy in King’s “Memoir of the Craft” first and foremost as a voracious bookworm.

Among King’s collection of writer’s tips, you’ll find nuggets of truth that serve writers and readers alike. The lessons you learn from On Writing will follow you through every epic tale, every suspenseful mystery, and every spacefaring adventure. Armed with the tools of a prolific writer, you will evolve as a reader

Review  – The Shining by Stephen King