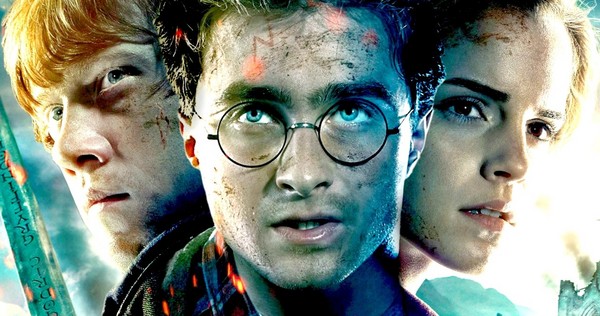 Home » All Reviews » O’ Children – The Orphans of Harry Potter

I was laying in the tub today trying to grasp a slippery thought. I have most of my semi-deep, to semi-ridiculous ideas while neck-deep in the suds. Goes back to my deep and unabiding love of bath bombs from Lush. The problem was that I had had a song on repeat in my head for two days. It was maddening. Especially when it is only a few bars of it. It was as if the thought was made of eel and Vasoline in equal parts, and every time I got just enough of it to push the song into coalescence it slipped through my mental fingers. By the time I had become sufficiently pruned, and the last of our sad little hot water heater was sputtering its last blessed drops, I had figured it out. I had the epiphanic moment.

The song was “O’Children” by Nick Cave, and the Bad Seeds and the scene was the dance scene from Harry Potter 8.

The connection that had been bouncing around my neurons for two days  Weird right. But I

Hey little train! Wait for me!
I was held in chains but now I’m free
I’m hanging in there, don’t you see
In this process of elimination

have funny thoughts pass through my brain a lot while nackt in der Badewanne (naked in the bath – practicing my German). There is a scene in Harry Potter 8 that is both lovely and mellow; until this point, I wouldn’t have described it as brilliant.  But it is utterly brilliant, and wonderfully written now that I think about it. When Harry and Hermione are waiting together in their tent. Ron had just left their expedition in a fit of madness and rage. Both Ron and Hermione are feeling down in different ways. It is an exceptionally well-acted scene, showcasing the talents of Emma Watson and Daniel Radcliff. They are listening to the radio, waiting for news, for death, for anything, when Nick Cave comes on. His voice is melodious but dark and deep and slow.  This is definitely not music you would usually dance to.

Do you remember where you were when you saw this scene? Did you hate it? Love it? In the Harry Potter film universe, it is one of the most divisive scenes ever written. On first watching, you could assume that it is hinting at a possible romantic connection between the lead characters. But, not everything has to be about romantic love. Harry and Hermione are completely worn down like butter scraped over to much bread. The body language of the scene suggests this. Hermione is almost fetal while Harry is at the far edge of the scene. The lighting of the scene suggests a somber dark and shadowy environment. Harry walks over to Hermione and takes her hand and begins to dance in a goofy way. For one blissful moment, they escape their lives

and dance together in the joy of friendship. A way that two friends would do to cheer themselves up. To bring a moment of levity into their world that is falling apart. The music is, for me, one of the best selections in a cinematic scene ever done. Bold words.

Here me out, and take a look at the lyrics.

[Verse 1]Pass me that lovely little gun
My dear, my darling one
The cleaners are coming, one by one
You don’t even want to let them start

They are knocking now upon your door
They measure the room, they know the score
They’re mopping up the butcher’s floor
Of your broken little hearts

O children
Forgive us now for what we’ve done
It started out as a bit of fun
Here, take these before we run away
The keys to the gulag

And you are only just beginning

We have the answer to all your fears
It’s short, it’s simple, it’s crystal clear
It’s round about and it’s somewhere here
Lost amongst our winnings

[Chorus]O children
Lift up your voice, lift up your voice
Children
Rejoice, rejoice[Verse 3]The cleaners have done their job on you
They’re hip to it, man, they’re in the groove
They’ve hosed you down, you’re good as new
And they’re lining up to inspect you

O children
Poor old Jim’s white as a ghost
He’s found the answer that we lost
We’re all weeping now, weeping because
There ain’t nothing we can do to protect you

[Chorus]O children
Lift up your voice, lift up your voice
Children
Rejoice, rejoice
[Outro]Hey little train! We are all jumping on
The train that goes to the Kingdom
We’re happy, Ma, we’re having fun
And the train ain’t even left the station

Hey, little train! Wait for me!
I once was blind but now I see
Have you left a seat for me?
Is that such a stretch of the imagination?

Hey little train! Wait for me!
I was held in chains but now I’m free
I’m hanging in there, don’t you see
In this process of elimination

Hey little train! We are all jumping on
The train that goes to the Kingdom
We’re happy, Ma, we’re having fun
It’s beyond my wildest expectation

Hey little train! We are all jumping on
The train that goes to the Kingdom
We’re happy, Ma, we’re having fun
And the train ain’t even left the station

The lyrics talk of a world being destroyed by the adults of the system, and it is up to the children to sort it out. It is hopeful. The bombs may be dropping, the world might be ending, but lift your voice children for there is always hope. Rejoice in that.

This is what the Harry Potter story is. I think it is even more powerful when you think of Harry and Hermione as lone orphans. Harry against his will, and Hermione to protect her parents. Both children, fighting a battle and losing. Alone in the world, and now abandoned by their third. Lift your voice children and dance.  Rejoice.

It is a really damn powerful scene, and I have so much more appreciation for it now that I can look at it through the lens of time.