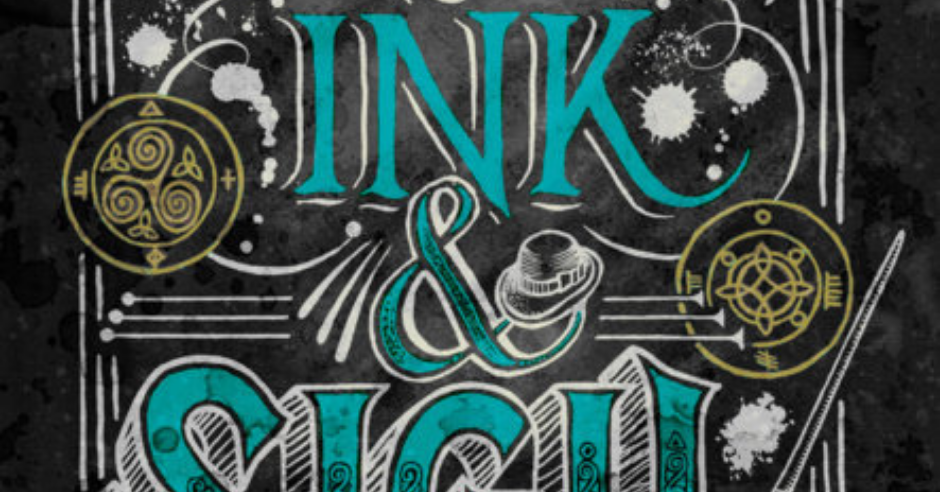 “Nigel went to Toronto on holiday and got his skull cracked by a hockey puck.”―

Al MacBharrais is both blessed and cursed. He is blessed with an extraordinary white moustache, an appreciation for craft cocktails – and a most unique magical talent. He can cast spells with magically enchanted ink and he uses his gifts to protect our world from rogue minions of various pantheons, especially the Fae.

But he is also cursed. Anyone who hears his voice will begin to feel an inexplicable hatred for Al, so he can only communicate through the written word or speech apps. And his apprentices keep dying in peculiar freak accidents. As his personal life crumbles around him, he devotes his life to his work, all the while trying to crack the secret of his curse.

But when his latest apprentice, Gordie, turns up dead in his Glasgow flat, Al discovers evidence that Gordie was living a secret life of crime. Now Al is forced to play detective – while avoiding actual detectives who are wondering why death seems to always follow Al. Investigating his apprentice’s death will take him through Scotland’s magical underworld, and he’ll need the help of a mischievous hobgoblin if he’s to survive.

Ink & Sigil is Kevin Hearne’s first book in an exciting new series called aptly Ink & Sigil. if you aren’t familiar with Hearne’s novels, he has a couple of interesting series, the most famous being the Iron Druid Chronicles. “Atticus O’Sullivan, last of the Druids, lives peacefully in Arizona, running an occult bookshop and shape-shifting in his spare time to hunt with his Irish wolfhound.”

“A toast! Tae inks and sigils and straight razors, tae good bosses and wizards on lizards, tae outsmarting evil when ye can and kicking its arse when ye cannae do that, and tae distillers of fine spirits everywhere. Sláinte!”

In my opinion, the Iron Druid Chronicles is some of the best urban fantasy out there and has the most loyal companion dog in all of fantasy. Although, Mouse from Dresden Files is a very close second. The banter and characterization of Atticus’s Wolfhound make many of his books both movers and funny. The Iron Druid series set me on a quest to find an Irish Wolfhound for myself.

With all that being said, this new series has a lot of the flavor of the Iron Druid series, a wicked sense of humor, banter, and action. But, we have an entirely new type of magic to learn about and a new champion protagonist to cheer for in Al MacBharrais. Al, aside from being a slightly cantankerous sigil agent, has also been cursed. As soon as he speaks, his once melodious voice now causes the hearer to hate his guts.

Instead, he is forced to talk to folks using a text-to-speech program on his phone. Problems with his various text-to-speech devices do provide a bit of comedic fun. I believe that who cursed him will be the overarching mystery of the series.

Specifically, the great mystery to this book is what is happening to his apprentices. They keep up and dying on him. Geordie, his newest apprentice, although not a nice guy in any way, did not deserve to die the way he did. Much to Al’s dismay, Geordie had been living a double life and dabbling in an underground trafficking ring. Fae had been captured and sold to the highest bidder for often nefarious purposes.

This ring is where we meet our sidekick of a sort in Buck Foi, a rogue and mischievous hobgoblin set to steal all he can and drink all of the whiskey. Geordie had him trapped.

This underground trafficking ring and the untimely deaths of his apprentices set Al on a quest to find out who is doing the stealing and killing.

Ink & Sigil is such a fun book. Generally, all of Hearne’s books are irreverent and do not take themselves too seriously. His books have a light-heartedness peppered with action that keeps the pace rolling along but still makes you laugh out loud as a reader. However, I think that Ink & Sigil steps up the quality and intelligence of the comedy. It is a smarter comedy, although Buck Foi does throw in plenty of dick and fart level jokes to spice things up.

Also, technically Al is much, much younger than Atticus. However, Al has wisdom that Atticus does not. Maybe it is because of Al’s profession; Al is a sigil master. He crafts words and symbols with special inks and seals them for different effects. Al, himself, is not magical. But he has the intelligence to do great magic.

Conversely, Atticus does Earth magic and communes with Gaia. His magic is more inward, and dealing with the spirit requires less mind and more soul.

Maybe it is the type of magic he practices or because Al looks the part of a cantankerous older man. Unlike Atticus, who looks 22 but is over 2000 years old. But Al feels like he is one inch from yelling at you to get off his lawn.

These beautiful characters come together to make a fun story that is relatable and with a moving plot. Al is full of all sorts of surprises as well as his staff. Nothing is really as it seems. And like The Iron Druid, it is undoubtedly going to be a bit of a keeper. I can’t wait to read more.

Check Out Some of Our Other interview and reviews

Hanging With My Gnomies in – No Country for Old Gnomes-; by Delilah S. Dawson, Kevin Hearne