NEPHILIM: A BEHIND BLUE EYES ORIGINS STORY volumes I through III by Anna Mocikat

Home » All Reviews » NEPHILIM: A BEHIND BLUE EYES ORIGINS STORY volumes I through III by Anna Mocikat 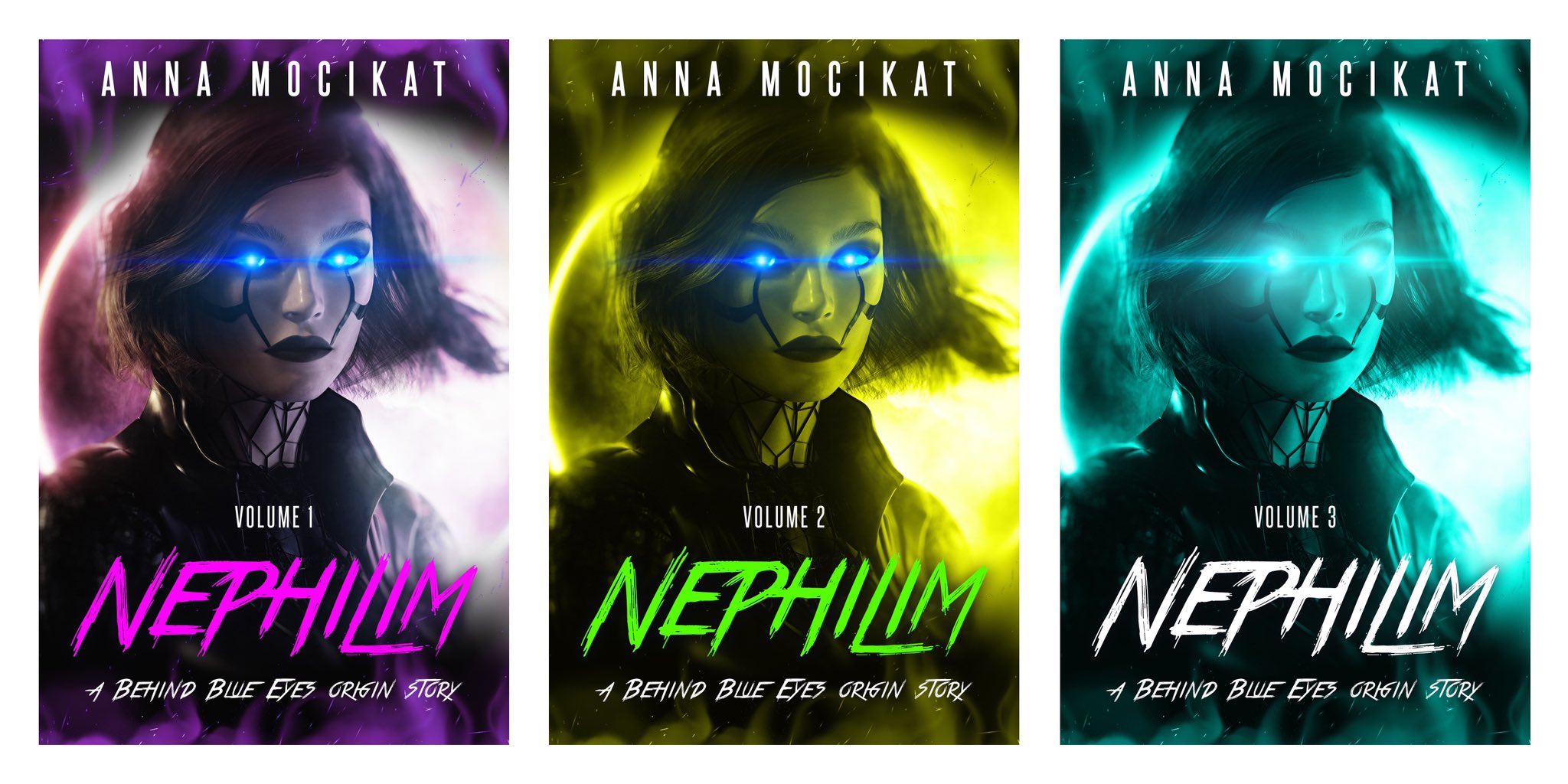 NEPHILIM: A BEHIND BLUE EYES ORIGINS STORY volumes I through III  by Anna Mocikat is a trilogy of prequel novellas for her wildly entertaining BEHIND BLUE EYES series that I’ve been reviewing as they’ve come out.  The main series is a fantastic cyberpunk series that I absolutely love and have devoured every installment of so far. They are about a bunch of cybernetically modified corporate assassins working for the sinister Olympias Corporation.

When the author, Anna Mocikat, announced she was doing a prequel series around its protagonist, Nephilim, I was extra excited. Reading the first novel, I found it was a story of how Nephilim was kidnapped from her family and turned into the murderous death machine she is in the main books.

I feel like this is a really tragic and interesting story as she is slowly taught to be a killer and indoctrinated into the poisonous Olympias Corporation ideology. Fans of the main series will also come to hate villain, Metatron, more because his treatment of the per-pubescent Nephilim now has shades of grooming since he later attempts to make her his lover. Thankfully, there’s nothing to that in the actual book-book, just him brainwashing her into a killer.

The Guardian Angel school reminded me a lot of the Black Widows’ Red Room from Marvel comic, despite including boy candidates, and that was a definite plus. I am definitely picking up more of these novellas as they come out, though. It is good for reading as both a stand-alone separate from Behind Blue Eyes and a companion piece.

Each book follows the character as she’s increasingly made more and more robotic as well as devoted to the cause of the Olympias Corporation. Despite being a profit driven entity, the company surrounds itself in ideological shields that claim they have eliminated poverty and strife while obviously lying their butts off. After all, you don’t need a cybernetic death squad to eliminate dissent if you’ve destroyed the forces that divide us.

Despite using the auspices of a coming of age drama and large sections of the story taking place from the perspective of an adolescent to teenage Nephilim, they are not children’s books but really a dark and twisted story of indoctrination. It deals with adult subject matter like sexuality, fascism, authoritarianism, and cults of personality. At several points, child characters do not make it to adulthood and our young heroine must simply soldier on.

I really enjoyed these three books even as sometimes the points they raise made me squirm. Cyberpunk is a genre meant for social satire and not just mirror shades as well as motorcycles. This had elements that reminded me of the movie Soldier starring Kurt Russel, Ender’s Game, and the works of both George Orwell as well as Aldous Huxley. Anna does a great job of making her handlers sound reasonable even as what they’re teaching is objectively insane. It’s a delicate balance and she threads the needle nicely.

Nephilim: A Behind Blue Eyes Origin Story can be read before or after the main series or even independently. The writing may not be for everyone as the early parts have a simplified writing style to reflect the naivite of our heroine as a child but gradually becomes far more complex.

Each book contains subject matter that some people may find controversial but nothing that isn’t found in, say, The Hunger Games. Which if you’ve read that series properly isn’t much of a defense. It’s not YA but people who like the darker of that genre will enjoy this as well as adults. They’re easy reads too and can be read separately or one after the other.