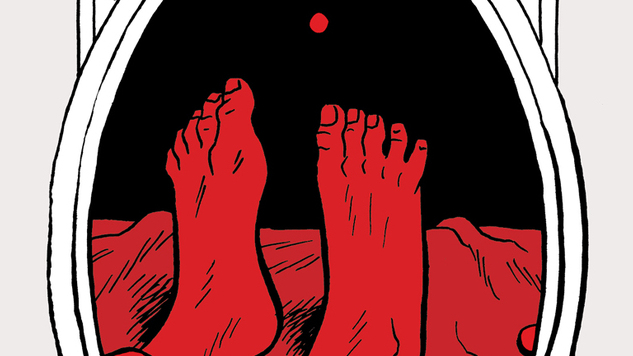 Mary Wept Over the Feet of Jesus by
Chester Brown

From the publisher, “The iconoclastic and bestselling cartoonist of Paying for It: A comic-strip memoir about being a john and Louis Riel returns and with a polemical interpretation of the Bible that will be one of the most controversial and talked-about graphic novels of 2016. Mary Wept Over the Feet of Jesus is the retelling in comics form of nine biblical stories that present Chester Brown’s fascinating and startling thesis about biblical representations of prostitution. Brown weaves a connecting line between Bathsheba, Ruth, Rahab, Tamar, Mary of Bethany, and the Virgin Mother. He reassesses the Christian moral code by examining the cultural implications of the Bible’s representations of sex work.”

Mary Wept Over the Feet of Jesus is a fitting follow-up to Brown’s sui generis graphic memoir “Paying for It”, which was reviewed twice in The New York Times and hailed by sex workers for Brown’s advocacy for the decriminalization and normalization of prostitution. Brown approaches the Bible as he did the life of Louis Riel, making these stories compellingly readable and utterly pertinent to a modern audience. In classic Chester Brown fashion, he provides extensive handwritten endnotes that delve into the biblical lore that informs Mary Wept Over the Feet of Jesus.”

This novel is a fitting followup to Chester Brown’s “Paying For It;” a practical and positive look at what it is being a John and hiring a prostitute. Paying For It is hailed by sex workers for its advocacy of Prostitution and normalization thereof.

Brown has been a vocal advocate for many years for sex workers, and it is evident in many of his works. He reminds me of a guy who is obsessed with Star Trek, or bugs, or 16th-century weaponry used in northern France. Nothing wrong with being passionate about something, but you wouldn’t necessarily want to be stuck on a road trip with him. He seems very very intense…

This collection is fascinating in how he approached nine individual Bible stories, completely turned them on their head, and presented them in a new way. All the while threading them together into a cohesive thesis on his beliefs. Some of the stories featured are of Bathsheba, the prodigal son, Cain and Abel, Ruth, Rahab, Tamar, Mary of Bethany, and the Virgin Mother. One of his stories shows Mary as a prostitute but still very much loved by God and fit to be the mother of Jesus.

Prostitutes, who often are demonized by the Christian church and society are shown as people who just have a job to do. The novel is definitely polemic, and if you are an easily offended reader or prefer to not read something that has religious overtones, maybe this book is not for you.  However, it is a quick read, and sometimes stories need to be turned on their side to see things from a new angle. Whether or not you believe them to be the truth, much as the author does, it doesn’t matter. Enjoy the well-written stories and the simple but still elegant graphics. If these stories intrigue you, and you would like to know more there are 100 pages of notes at the back of the book detailing why he made certain literary and artistic decisions and the research behind them.

I didn’t necessarily like this graphic novel, but it was indeed interesting. Sometimes interesting and thought-provoking are good. I have one of Brown’s other works, Ed the Happy Clown sitting on my shelf waiting to be read. We will see what kind of rabbit hole it leads me down.

Check Out Some of Our Other Graphic Novel Reviews