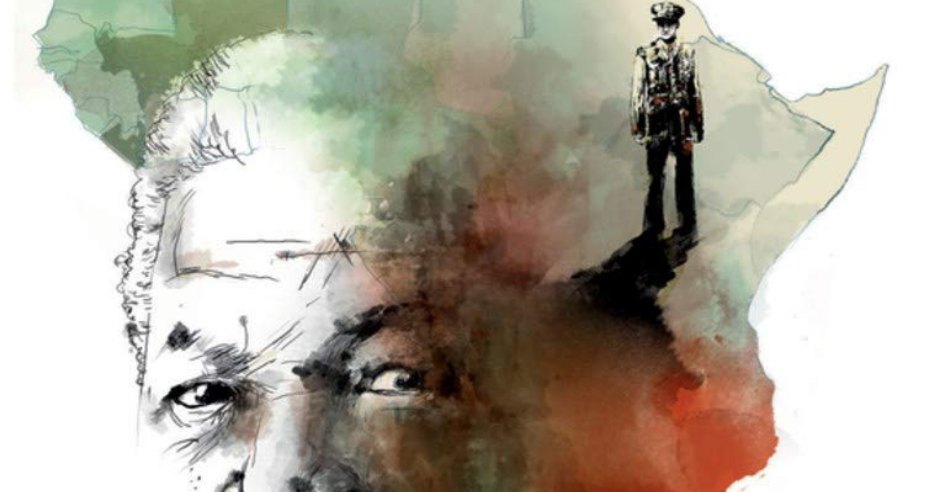 A Piece of History in Every Panel in “Mandela and the General” by John Carlin, Oriol Malet (Contributor)

From the publisher, “In this thrilling graphic novel, Nelson Mandela’s fight against racism is about to spiral into an all-out race war. Unless he can win over his archenemy, the white supremacist General Viljoen, the democratic struggle for equality and justice in South Africa will end in “the peace of graveyards.”

As the first post-apartheid elections approach in 1994, with South African blacks poised to take power, the nation’s whites fear reprisal. White nationalist militias claiming 50,000 well-armed former soldiers stand ready to fight to the death to defend their cause. They need someone who can lead and unite them. That man is General Constand Viljoen, former chief of apartheid South Africa’s military.

Mandela knows that he can’t avert a bloodbath on his own. He will have to count on his archenemy. Throughout those historic months, the two men meet in secret. Can they trust each other? Can they keep their followers and radical fringe elements from acts of violence? The mettle of these two men will determine the future of a nation.

The drama of this contest and the history that pivoted on it comes vividly to life in visual form. Veteran British journalist John Carlin teams up with Catalan artist Oriol Malet to create a historically and artistically rich graphic novel with obvious relevance to today’s polarized politics.”

“We must strive to find a political solution that reconciled White fears with black aspirations.”

Mandela and the General is a powerful book full of historical moments that changed the fate of a nation. The story is not frivolous, and watching power and change unfold page to page is a heady thing. Also, the story is an accessible and well-done distillation of Mandela’s and General Viljoen’s characters. It could be a heavy thing due to the gravitas and importance of the content, but it effortlessly flows from page to page.

Mandela and the General is told from the General’s point of view. The violence is never sugar-coated nor is it excused, and even though he was on the wrong side of history, it showed how he was trying to do what he thought best for his people. The good and the bad of it are drawn out for the reader to see. I appreciate this as a lover of history. There are two sides to everything, showing the thought process behind the General’s actions keep him from becoming a one-dimensional character.

It is graphically a beautiful book. Ink and watercolor are such lovely mediums to group together. They add softness and a crispness to panels at the same time. Also, the monochromatic color scheme of the book adds a certain level of gravitas to the story and it is very well done.

Graphic novels are an excellent way to tell history. Not only does the reader get the subtle nuances of the written word, but they also get a visual representation. Mandela and the General does both very well. It is engaging without being over-cramped with facts. Beautifully inked and a definite recommend.

Review -A Psalm for the Wild Built by Becky Chambers

Graphic Novel Review of – The Arrival by Shaun Tan