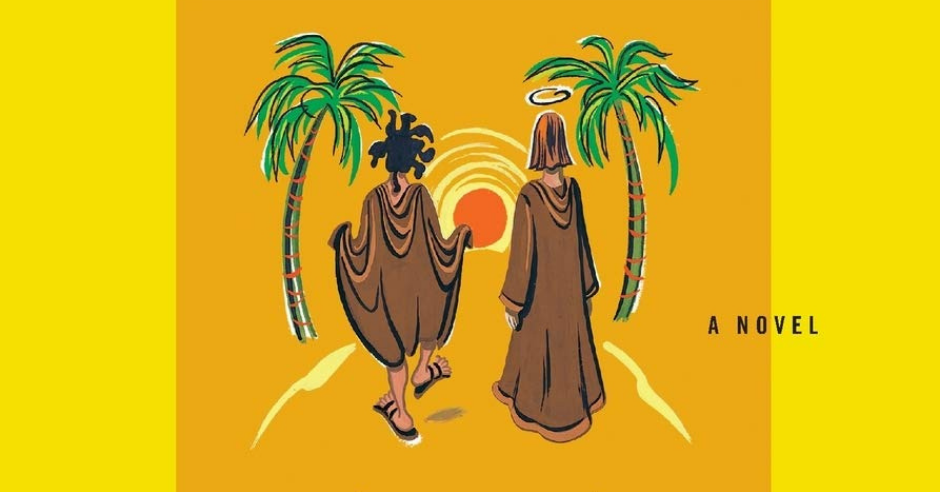 Review – Lamb The Gospel According to Biff, Christ’s Childhood Pal by Christopher Moore

Lamb the Gospel According to Biff, Christ’s Childhood Pal is pure satire

lamb: the gospel according to biff, christ’s childhood pal

“If I’m sincere today, what does it matter if I regret it tomorrow?”―

Everyone knows about the immaculate conception and the crucifixion. But what happened to Jesus between the manger and the Sermon on the Mount? In this hilarious and bold novel, the acclaimed Christopher Moore shares the greatest story never told: the life of Christ as seen by his boyhood pal, Biff.

Just what was Jesus doing during the many years that have gone unrecorded in the Bible? Biff was there at his side, and now after two thousand years, he shares those good, bad, ugly, and miraculous times. Screamingly funny, audaciously fresh, Lamb rivals the best of Tom Robbins and Carl Hiaasen, and is sure to please this gifted writer’s fans and win him legions more.

Lamb The Gospel According to Biff, Christ’s Childhood Pal is a hilarious satire that takes on Christianity.

Christopher Moore enjoys poking ideas with sticks to see what leaks out. It is obvious in all of his marvelous works: Fool, The Island of The Sequined Love Nun, A Dirty Job, and more. What leaked out this time was the bawdy, heartfelt, and raucous retelling of the life and times of Jesus Christ told to us by his slightly careworn childhood best friend Biff.

What better way to understand a mighty person and a mighty goal than to see them down, befuddled, pimple spotted, and hormone riddled?

Many authors over the years have taken a minor character and retold the story through their eyes. West Side Story is a retelling of Romeo and Juliet. Hamlet was retold through the confounded eyes of Rosencrantz and Guildenstern. Seeing a famous plot or idea from a minor character allows an additional level of gravitas.

Basically, if you want to find out the merit of someone, don’t ask them directly. You ask their barber or their waiter that they deal with on a daily basis. Then you will know if they are an asshole or not. So, Moore asked Biff about Jesus.

In this story, Moore seeks to fill in the missing years of Jesus’s life via his best friend Biff. Biff, newly resurrected by the Angel Raziel, whom we meet again in “The Stupidest Angel”, is set to narrate what the Son of God was up to in his formative years. In all the world, your best friend always has the real goods on you.

What happens is twenty years various interactions, debauchery, and foibles with deities from all religions and walks of life.

They learn from the three wise men who are a magician, a yogi, and Buddhist respectively. They learn from Confuscious and chinese concubines. They encounter the last yeti and rescue children from Kali.

In there is a demon too. I think most importantly we get to know Maggie, also known as Mary Magdalene, who through modern Christianity is sullied and besmirched as nothing but a sinful woman.  Here she is given a much better and more fitting role that ends on a wonderfully bittersweet note. It is brilliant for Moore to acknowledge a world full of information and chances to learn.

Biff is a perfect counterpoint to Joshua. Oftentimes Joshua is pedantic, naive, and prone to arrogance, while Biff remains steadfast, humorous, and realistic. I enjoyed reading their travels and adventures as Joshua learned to become the true savior and son of God. Despite the sometimes adolescent level of humor, fart and dick jokes, Moore still retained a respect for the subject matter.

Moore is not trying to make fun of Christian beliefs, I think that he is attempting to humanize a godlike character that in his biblical grandness loses what each of us mere mortals can relate to. Jesus had foibles, and acne, and all of that.

Celebrate it.  He rose above it all to become the deity that is worshiped today and that is pretty damn awesome. Moore writing a story like this is both an admirable and successful endeavor while being terrifying at the same time.

Holy hell Lamb the Gospel According to Biff, Christ’s Childhood Pal was fun to read. I laughed and laughed and laughed. I am a fan of taking something that is serious, turning it on its head, and roughing it up a bit. If your beliefs can’t survive a good flogging, then this isn’t the story for you. Think Monty Python meets Mel Brooks meets Black Adder. The world is too serious right now.

We need to be able to chuckle at our gods and know that we will come out on the other side no worse for wear. If I could recommend any living comedy/satire writers out there it would be Moore and specifically Lamb the Gospel According to Biff, Christ’s Childhood Pal.

Lamb the Gospel According to Biff, Christ’s Childhood Pal is a worthwhile read and if you need to not take yourself so seriously for a few hours, please read it.

Check Out My Other Articles