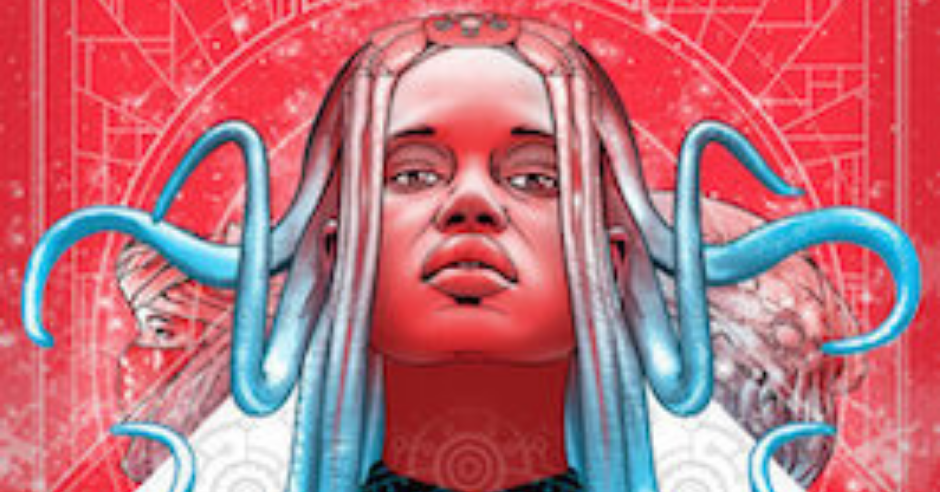 “They say that when faced with a fight you cannot win, you can never predict what you will do next. But I’d always known I’d fight until I was killed.”

From the publisher, “Her name is Binti, and she is the first of the Himba people ever to be offered a place at Oomza University, the finest institution of higher learning in the galaxy. But to accept the offer will mean giving up her place in her family to travel between the stars among strangers who do not share her ways or respect her customs.

Knowledge comes at a cost, one that Binti is willing to pay, but her journey will not be easy. The world she seeks to enter has long warred with the Meduse, an alien race that has become the stuff of nightmares. Oomza University has wronged the Meduse, and Binti’s stellar travel will bring her within their deadly reach.

If Binti hopes to survive the legacy of a war not of her making, she will need both the gifts of her people and the wisdom enshrined within the University itself – but first, she has to make it there, alive.”

Where have I been? Apparently, under a rock, because there is a bit of a Nnedi-renaissance going on. Her work, whether a short story, novella, or full-length novel, is everywhere and very well respected in the science fiction/fantasy community.

This story is pretty straightforward. A fish out of water tale. However, what is not straightforward is the depth of character that Okorafor created in such a short novella.

Binti is a 16-year-old girl from the isolated Himba region on Earth. She applies and is accepted into the prestigious intergalactic university Oomza Uni, and is the first person of Himba descent to ever be admitted, let alone attend the prestigious school. Right away, we, as a reader, know that Binti is stepping way out of her comfort zone, both culturally, physically, and emotionally. Her people are very traditional and are not one to reach out to change. This in itself is a huge internal conflict for Binti that is artfully addressed throughout the story.

While in transit, Binti’s ship is attacked and hijacked by the warlike Medusae people. A jellyfish-like species that has been at war with the Khoush, aka other earthlings. The entirety of the ship’s inhabitants, save for Binti and the pilot, is murdered with little regard. To escape, Binti retreats to her personal living quarters, after which she attempts to wait out the trip to make it to Oomza Uni alive.

“I swiped otjize from my forehead with my index finger and knelt down. Then I touched the finger to the sand, grounding the sweet-smelling red clay into it. “Thank you,” I whispered.”

In the process of trying to survive, Binti makes some startingly discoveries. First, the piece of technology that she brought from earth, called an edan, enables Binti to communicate with the Medusae. Something that had previously not been accomplished. Secondly, the red clay-like substance that Binti uses from her homeland called otijza has healing properties for the Medusae.

Without giving too much away, Binti uses her empathetic nature to work with both the Oomza Uni and Medusae. That is the end of this particular novella, but not the story. Okarafor has gone on to write two additional novellas that flesh out Binti’s character even further.

First, let’s address some of the high points of the story and writing style. Nnedi Okorafor is an authentic writer. In that, I mean she feels entirely at home within the prose of her words, and it reads comfortably. There are no forced situations or scenarios; every scene flows smoothly and transitions from one scene to the next. This is a rare trait in a writer, especially at a short story or novella-length, when much has to happen in a short period. Okorafor is an author that shows instead of tells. The technology that she has created naturally doesn’t exist, and its use in the story is a huge and essential plot point. Instead of saying that Binti’s edan does this and that, Okanfur shows us.  Lastly, I feel like I know Binti. Okorafor has described Binti so vibrantly that I feel like I could hold her braids in my hand, smell the red clay she coats her body with, and the electrical currents she can harmonize. Oddly enough, it has little to do with how tall Binti is or other physical features and entirely on the content of Binti’s character, quality of writing, and a feel for her as a person.

At the end of this novella, we learn that knowledge comes with a significant cost, a cost that Binti has to pay. The ending is both bittersweet, a punch in the proverbial gut, and an opportunity for her to become more. Well worth the read. Not only is this a feather in the cap of Africanfuturism, but of science fiction at large. This is a damn good story.