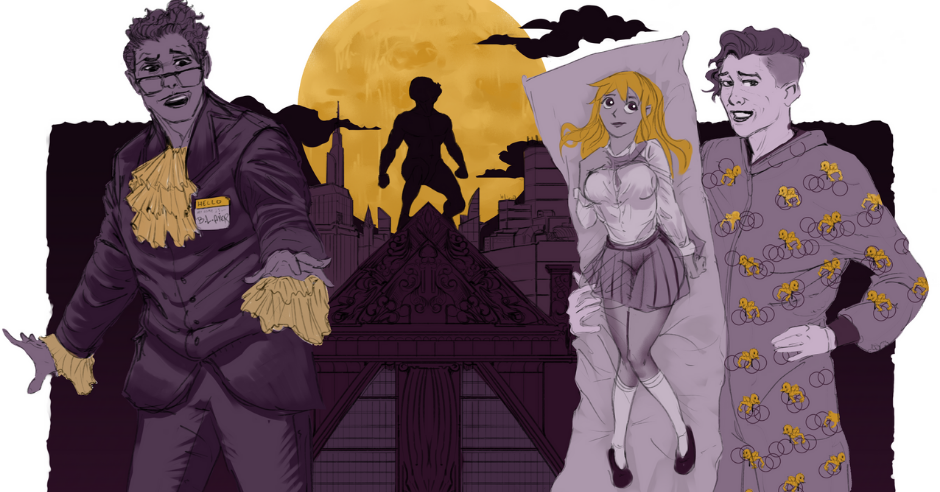 Below is the interview with G.M. Nair and Edpool found here. I am reposting it with permission because this interview is hilarious much like Nair’s books. Nair is releasing his third book in the series today!

If you haven’t read them, please do with a quickness.

[Nair:] Yeah, this is a pretty boilerplate question, but what can I expect from such a hack journalist?

But I signed up for this, so fuck me, I guess?

As for the explosion question, probably only one is acceptable, because afterwards the rest of the variants will avoid you because they know you don’t practice safe sex.

[Edpool:] Your bio says you have degrees in Aerospace Engineering and that you work as an Aviation and Aerospace Consultant, but I’ve read enough text produced by engineers to know you are clearly an impostor. What’s with that?

[Nair:] I never said I was a GOOD engineer. Next question!

[Edpool:] On your website you have a standing offer to answer crazy questions using science (send mail to NairForceOne@gmail.com, put “[BACK OF THE ENVELOPE]” in your subject line). Have you ever encountered a question that was either too crazy, or too difficult, to publish? Or can “multiverse” basically cover every conceivable base and are you as amazed as I am that the scientific consensus hasn’t adopted it as the explanation for everything yet? It would, for example, have greatly simplified the recent pandemic.

[Nair:] To my great chagrin, I haven’t received very many questions for that column! So I’ve pretty much put out every single question that’s been posed to me. But, yes, ‘because multiverse’ could be an explanation for a great many things, if I were a HACK.

[Edpool:] You’ve been working on an epic space opera for a couple of decades. As someone who’s loved your Duckett & Dyer worldbuilding so far, “The Centre of All Things” sounded immediately exciting and tantalising. Care to tell us a little more? Have your recent triumphs inspired you and are we any closer to seeing your magnum opus in print? Or if you’ve already talked about this a whole bunch because we’re quite a long way down the tour list, can you tell us which performing artist should have been the fourth Beatle (YOU ALL KNOW WHICH ONE I’M REPLACING)?

[Nair:] The Centre of All Things? Oh man, you really did your homework. I guess you’re not as much of a hack as I’ve been telling everyone you are.

[Nair:] But, you can actually see some of the first parts of The Centre of All Things out on the internet already. I cleaned up some of my older drafts and put the first few chapters of it up on Kindle’s serialized platform Vella. But I’ve since realized my laziness production schedule doesn’t really allow for frequent serialized updates, and I’m much better when I have a longer timeframe to put together a full book. I’m not sure when I’ll have the confidence to finalize my mrhollands opus, but hopefully before I die?

You can find Centre here, if you don’t mind working with the semi-beta Kindle Vella platform, along with Birds of a Feather Flock Forever, which is the beginnings of an urban fantasy with big Duckett & Dyer energy.

[Edpool:] You’re part of a sketch group based in New York City and some of your comedy scripts are hilariously reminiscent and clearly inspired Duckett & Dyer. Have you had many opportunities to see your writing performed on stage, and how great would it be to see “Duckett & Dyer: Dirty Rotten Lyres: A Renaissance Faire Murder Mystery: The Musical!” on Broadway?

(Ben Brantley said it was basically “Galavant” meets “Bill & Ted.” And not in a good way. Caitlin Huston called it “the greatest atrocity ever put to Corvus Corax music.” Although I think she did mean that in a good way.)

[Nair:] I’ve had a good number of opportunities to see my work performed on stage. It’s always a mix of ‘thrilled to see actors performing my work’ and ‘upset that I think some of my dialogue could always be better’.

I’ve never been much of a Broadway guy, so a Duckett & Dyer Musical might be a hard sell. But a normal stage play, you might have my attention.

[Edpool:]  Stephanie Dyer’s evolution from hilarious, infuriating agent of chaos to heart-wrenching best friend (still with quite a lot of chaos) is something I compared to a John Candy character arc. Since I don’t have a question about that and just wanted to congratulate you again on making me cry a bit while reading such a silly book, what’s your favourite John Candy movie and why is it “Cool Runnings”?

[Nair:] “Cool Runnings” is the quintessential heroes journey with an already lovable cast of misfits that the presence of the big JC just elevates into sports movie greatness.

[Edpool:] This week’s leg of the blog tour has brought you to Hatboy’s Hatstand up in Finland, and The Nerdy Nook which, I did some snooping and they’re based in Minnesota. Ignoring the fact that this is all happening electronically and none of us actually got off our butts and went anywhere and this is all utterly nonsensical and everything is futile, I think we’d all like to know what you packed in your a) imaginary steamer trunk and b) make-believe cabin baggage for the seventeen trips back and forth between the two locations that you pretend-completed in the course of this tour stop?

[Nair:] a) My trunk would be filled with stuffed animals, eggs, and letters from my sweetie.

b) My cabin baggage would be filled with a laptop, an e-reader (for books), a tablet (for comic books), and about 3 more eggs.

[Edpool:] You have clearly decided to lean into the joyous existential preposterousness of Twitter rather than its potential for misinformation and anonymous mean-spiritedness. Would you care to justify that decision, or has this question just answered itself for you?

[Nair:] Honestly, I think I should be meaner.

[Edpool:] Remember how people used to go places and meet other people? How much of that do / did you generally do in the before times, and aside from Finland (where you would stay in my garage with a word processor and no connection to the outside world of your own free will), where would you most like to travel if you’re into that sort of thing?

[Nair:] After I finished my Master’s in the before time, in the long long ago, I did the stereotypical American post college Eurotrip, and I enjoyed every minute of it. If I could live in a different city every day, I really would. And although my travelling was curtailed by work – aside from some pretty decent work trips – I really do miss the freedom of it.

But New Zealand is definitely at the top of my list for once this whole disease/war/political strife at home and abroad thing blows over.

[Edpool:] We see a lot of independent writers chipping away at their “WIP”s in the author community, as well as traditionally-published authors and folks who go for a blend of the two. Given that the preferred business model for most writers I’ve talked to is “who cares as long as each person on Earth buys at least three copies of my book and also Amazon makes a hundred-million-dollar adaptation out of it and everyone shouts about what a betrayal of the source material it is but I still get paid anyway,” what were your dreams going in vs. your dreams now, and do you have any words of wisdom for writers just starting out?

[Nair:] Honestly, I started out trying for trad pub, but had no qualms about going the indie pub route when it became clear that D&D was too niche for the standard market. I get it. All I’m really looking for is for people to read and enjoy my writing – as many or as few as that may be. Would I like to see D&D optioned for a streaming series? Absolutely. I think it really belongs there, but do I have any delusions of that actually happening? Absolutely. Why wouldn’t I?

But at the end of the day, I think I just want to have a cult fandom spring up for Duckett & Dyer: Dicks For Hire. And for that fandom to call themselves ‘Dickheads’.

As for advice to writers just starting out, it’s to really do it for the love of the game, because that’s what’s going to keep you going. I would also advise them to ask for the next question.

[Edpool:] The phenomenon of books, plots or themes “not aging well” is something a lot of authors struggle with. Do you consider your stories to be a product of their time, or is the sheer scope and surreal nature of the science a bit of a coat of armour when it comes to creating something hopefully timeless?

[Nair:] Yes and no. The weird out there stuff will always remain weird out there stuff (hopefully), and I hope those parts of the stories give them an evergreen quality, but there’s certainly going to be pop-culture references and jokes that ‘date’ Duckett & Dyer: Dicks For Hire and its sequels.

But in an effort to counteract that, Duckett & Dyer was already dated when it came out in 2019. It dates itself – because all the events in the book (and subsequent sequels) are stated to all take place between 2013 and 2016. I did that on purpose for two reasons:

[Edpool:] I’d like to finish on a question open-ended enough that you can basically say anything else that still happens to be on your mind. What do you think such a question would look like?