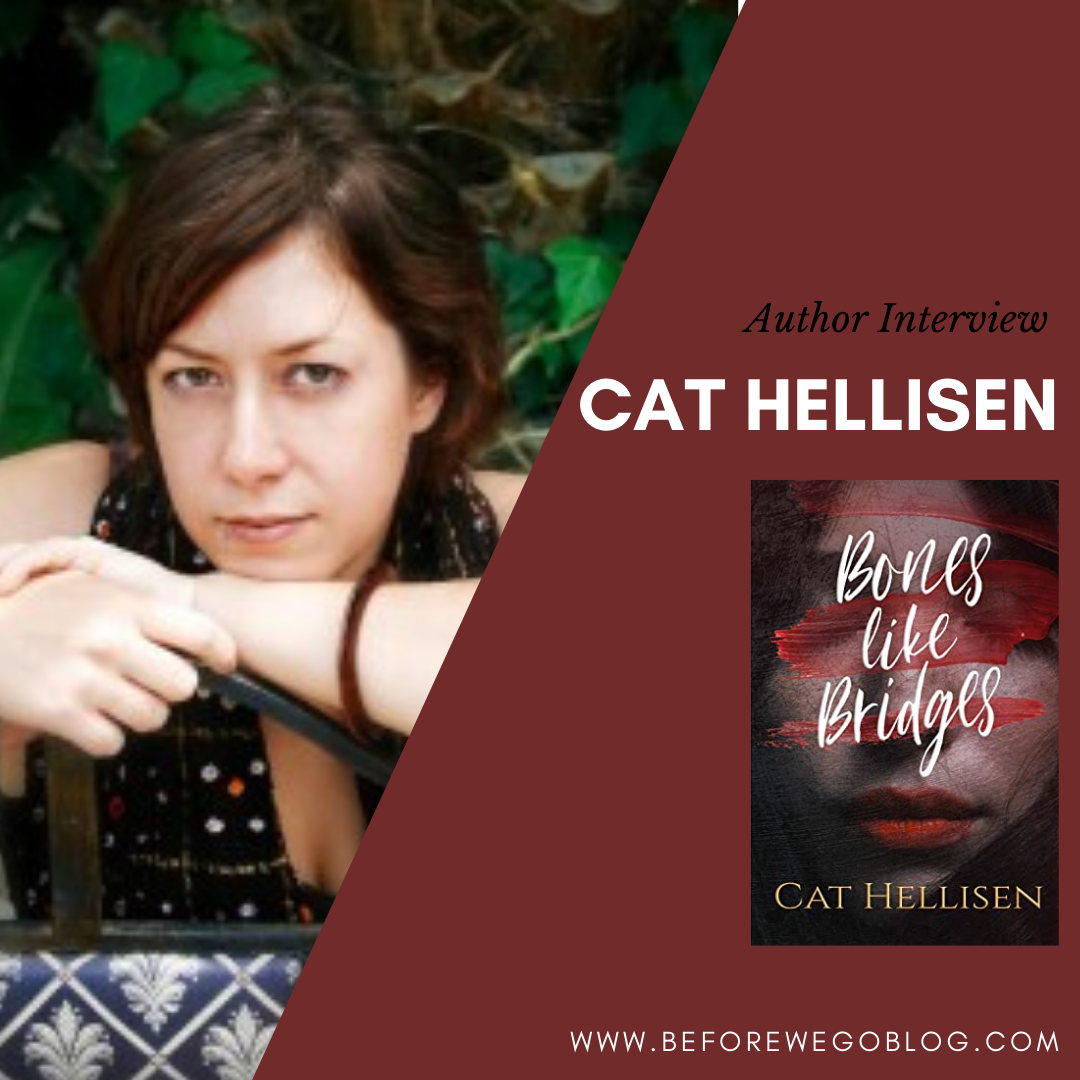 Interview With Cat Hellisen, Author of Bones Like Bridges

Cat Hellisen “…Fall in love, get hurt, get scared, get happy.
Then bring that your writing….”

Hi and thanks for joining us. Tell us a bit about yourself and your writing.

Thanks for the welcome and for inviting me to be on the blog. I’m Cat Hellisen and I’m a writer who grew up in South Africa, but moved to Scotland a few years ago. I tend to write lush, character-driven fantasy often with a queer bent, and with nods to malleability of form, magic, drugs, general weirdness, and water. Water gets in everything. I’ve written and published both short and long form works, and very occasionally write spec poetry, which is probably the hardest thing to write, so much respect to those who do it full time.

Your characters are often monstrous in some way, and ostracized from society. Some of your stories, (The Worme Bridge springs to mind in particular), feel like body horror. What draws you to this so often?

I grew up quite poor, and we moved around constantly. At one point I tried to count how many times I’ve moved and got to twenty-six and just decided naaaah. I’m also a human with a fractured family history. Add to that just being a weird kid who found it difficult to form friendships, and I think it all feeds into my exploration of ‘not fitting in’. Whether my characters don’t fit their own skin, their own society, family, world, or all of those things. It’s led to a fascination with characters who reinvent themselves, sometimes in an extremely real, physical sense. So, perhaps this is what you mean by body horror? There’s a painful ugliness that comes with reinvention, but also a freeing beauty. So, I don’t even know if it’s so much body horror as the acceptance of the horror of bodily change in order to become another thing. Perhaps in the same way that a caterpillar must become goo inside a pupa before it reshapes itself.

I may have answered a lot of that in the above question haha. In all seriousness though, I think my obsessions with water and not fitting in and recreating yourself all come into play there. Of course, in this case, the reshaping is forced on the characters, rather than their own choice, but the way they approach it has a certain practicality. I wrote it really as a story about having to grow up. (This may sound odd, but it was very, very vaguely inspired by thematic ideas in the anime FLCL, make of that what you will).

When I received the phone call that The Worme Bridge had won SSDA, I was at home in SA (the awards were at the Ake Festival in Nigeria) and I thought they were joking. I ended up spending the prize money on vet fees for two stray dogs I found so, I’m not sure what that says about me? I like dogs and am terrible with money, I guess.

Your settings are constantly evocative, moody, and atmospheric. Where do you draw inspiration from?

At the time, from the only country I had ever lived in. South Africa has got to be one of the most beautiful countries in the world, and I miss it with a fierceness that can make me ache inside.  Especially the ocean by Muizenberg, which was where I last lived. Because of constantly moving, I’ve lived in various parts of the country, and I draw on all of them for setting. These days I can draw on Scotland too, but after thirty nine years of living in one land, the shape of it is etched into your bones like scrimshaw.

Who are some of your major influences, and why?

I don’t know how much of my influence shows through, but five names always spring to mind: Ursula K le Guin for her themes and use of language, Tanith Lee for her poetic queerity, Diana Wynne Jones for her love of myth and folk tales, Clive Barker for his dreamlike use of horror, and Angela Carter for her fiercely vicious fairy tales.

You move around a lot between short fiction and novels, and your work ranges from Middle Grade to adult. You’ve also jumped between fantasy and somewhat more SFnal work with High Tower Gods. Why leap around so much? What do you enjoy out of it?

If I look at my work as a whole, I don’t actually see much jumping around (and in fact, I worry that my works are all too ‘samey’.) The same concepts and ideas come through; the shifting of form, the liminal space of the outsider, the fear of change, the broken relationships saving broken people, the found family. I just…play around with how I approach them.

I mentioned monstrous characters earlier, but are there other themes you find yourself repeating through your books, intentionally or not?

I think this all comes back to what I said above. But the ‘monstrous character’ is one I hadn’t really thought about. I don’t set out to write monsters. I just try write people in all their shades and variations, their subtleties and facets, their hidden rooms. As a reader (and most definitely as a writer) I rarely have time for characters who are either black or white in a moral sense. The perfect, haloed hero, the monstrous puppy-eating villain – I find these dull and flat, so I try not to write them. Does this mean I write monsters? Does their shape define them, or their actions?

You’re a hybrid author, published by the Big Five, small presses, and self-published. Tell us a bit about your experience in those areas.

They have been very different, and there are pros and cons.

The biggest is money. The money is in trad, if you can get a deal. If you write fairly niche fantasy (like I do), it can be hard to get either a deal or sales, but you’re more likely to find a small press who’ll help, than make sales with self-pub. Self pub big money comes in when you are writing to trend, with significant output.

But in terms of control over your covers, your approach to writing, then yes, indie-publishing is definitely the winner there.

Of course, actually getting picked up by a big publisher is a huge feat, and one even previously published writers struggle with, especially now where the midlist and the long, slow career growth ideas seemed to have been dropped. Which is why I think you see a lot of authors with hybrid careers these days.

If you’re going to go indie, my suggestion is to make sure you either have a lot of money to put into editing, formatting, cover art, marketing etc, or be part of a writers co-op where the work is shared out among the various talents.

Excluding the typical read a lot and write a lot, what is your best writing advice?

Go out and live. Writing is not powered by what you consume (though obviously it helps, especially on a technical level) but on how experience informs your understanding, your empathy. I’m not just saying, go out and get hobbies (although I totally am saying that) but go out and meet people, experience the world, breathe deep, watch the birds dip and wheel, listen to people talk in cafes. Use every sense you have to appreciate the world and all the things in it. Fall in love, get hurt, get scared, get happy.

Then bring that your writing.

Bones Like Bridges is the next book up. Tell us a bit about that book and what you’re hoping people will get from it.

Oddly enough, this was one of the first full novels I finished, and I’ve been poking at it for years. Since it’s set in the same world as When the Sea is Rising Red, I just could not find a home for it because although it’s a stand-alone novel, it came with baggage.

It’s fantasy in a world where magical fall-out from an ancient war has corrupted the people and lifeforms, and now, centuries later, you have vampires and unicorns and sphynxes, but they’re all twisted versions of what came before. And it’s a love story, if you squint and hold your breath.

It’s about a young man who gets pulled out of the slums after his mother dies, when his high-born father can claim him as an heir (however crass and unmagical he may be.) And it’s his story, about being this unwanted—loathed—outsider on a world where magic is falling apart, and the world is going to war, and he has these small, personal struggles that fit into something greater.

The narrative is structured around three viewpoints that slowly braid together so you have three versions of what is going on, because I think every narrator is ultimately unreliable (because, humans). So you have Jek, the powerless low-caste son, now heir to a highborn magical family, Calissa, his half-sister who is powerful and clever in all the wrong ways and thinks she is being unfairly done by (and she’s right), and Sel, who is a vampire who has gone mad and forced into sex work under the city caste-system, who sees Jek as his chance of freedom.

There are vampires, and castes, and magic drugs, and people just generally being assholes, as people are wont to be.

I hope that readers enjoy it. After all, what more could I ask? If you’re into broken people, power plays, and queer romances then maybe this one is for you.

And lastly, what are you working on currently?

About the Author – Cat Hellisen

Cat Hellisen writes fantasy for adults and children. She has lived in Cape Town,  Johannesburg, Knysna, and Nottingham, and currently lives in Fife, Scotland, where the forests and the fields and the Forth provide constant inspiration.

Since she grew up in a series of  libraries, Cat has always preferred reading to just about anything else. Even though as a child she assumed all writers were already dead, she figured that at some point they must have been alive and so she set out to write her own stories. (They were almost invariably about dogs. Magical dogs.) It took many years before she actually wrote something which  other people wanted to read.  Along the way, she discovered that having hobbies outside of books was actually a fun thing, and she has done belly dancing, archery, aikido, running, and figure skating.

When the Sea is Rising Red, Cat’s first full-length novel, sold to FSG in 2010. It’s a story about found family, class and magic and making difficult choices. It’s also about tea, sometimes.

Her children’s book Beastkeeper, a play on the old tale of Beauty and the Beast, was released February 3rd 2015. Cat likes to call it “A fairy tale for the loveless”, which makes it sound like she knows what it’s about. (She does, she just wants to see what you think.)

Cat’s  short stories have appeared in Tor.com, Fantasy & Science Fiction, Apex Magazine, and Something Wicked, and in several anthologies ranging from Lovecraftian, to Steampunk, to African fiction. She won the Short Story Day Africa award in 2015 for “The Worme Bridge”.

This picture of her is quite out of date, for reasons.