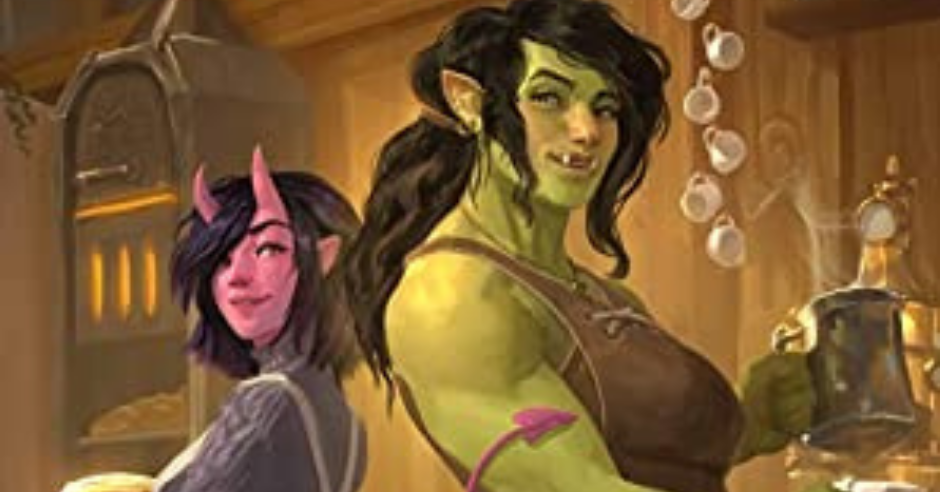 Former Game Developer, turned Audiobook Narrator, turned Indie Novelist Travis Baldree is someone that should be familiar to many by now. His cozy-fantasy Legends & Lattes – about an orc who opens a coffee shop – has skyrocketed to the top of the charts pretty much everywhere and has since been acquired by Tor. I read the book this past month and personally believe it deserves all the praise it’s getting (see my full review here), but I was fortunate enough to get the opportunity to sit down with Travis himself for a little chat and can confirm the man behind the book is just as delightful.

First off, how are you?

Alright, now that we’ve gotten that out of the way, let’s start with the most obvious question. How does it feel to have not only authored a runaway success but also kicked off a sort-of genre craze?

Did I already say unexpected? I guess I did. The response has been unbelievably nice, and I’m humbled and grateful. I feel like I just happened to hold my bucket under the right rain cloud, and all I did was make sure the bucket didn’t have any holes in it. I’m pretty sure this subgenre already existed in a few different forms, and maybe this book is simply a lightning rod for recognizing it. T. Kingfisher and Diana Wynn Jones and many others have already explored the territory with intention I think. I just accidentally bumbled into it.

Where/when did the idea for Legends & Lattes begin to germinate? And, more importantly, why coffee specifically?

Honestly, it was based on an offhanded joke I made during some live narration. I read a lot of fraught, high-stakes adventure fiction, and I said something about wishing I could read a Hallmark fantasy movie. I think the initial joke was – “hard-charging dwarven lawyer goes home to save her dad’s mine from financial disaster and finds love and purpose” or something equally ridiculous. Eventually I arrived at the orc and her coffee shop. As to why a coffee shop – it was October of 2021 and I would’ve given anything to hang out in one and see people’s faces. I love coffee, and the thought of being able to just sit quietly inside a coffee shop was the height of escapist fantasy for me.

What’s your secret for making the most mundane of activities so damned compelling?

I wish I knew. I assume it’s because I’m only talking about those things because it’s important to the characters themselves, and I’m trying to relate why – so hopefully the audience relates too?

You’ve been a sort of all-star audiobook narrator for years. What spurred the jump to the other side of the page (so-to-speak)?

I’ve always wanted to write a novel. I have a lot of failed NaNoWriMos behind me – this just happened to be my first success. My friend Aven Shore-Kind (also a narrator) encouraged me to give it another go, and we kept each other on the straight and narrow until we both finished.

Did you find that having read and narrated other peoples’ fiction influenced the writing style and structure of Legends & Lattes?

Honestly it was a pretty huge factor for me. Reading fiction out loud (without skimming) very rapidly teaches you what you like and don’t like, and which things translate well, and which things don’t – pace, dialogue, feeling. All of those things are very noticeable, and you are constantly learning mechanically about why prose functions. It’s incredibly instructive. Reading hundreds of books out loud is a huge amount of iteration on your own personal writing taste. People always say you should read aloud to edit because of how much becomes clear to you – the same can be said for reading other people’s work out loud.

I always find going back and reading my own books a bit of a painful process since I tend to find a lot of places where things could always be better. Similarly, how did it feel to narrate your own work for a change?

It was actually the easiest narration I’ve ever done. The author’s intent was never, ever in doubt, and I knew everyone’s voices and mannerisms. When writing, I was basically narrating in my head. It was the most pleasant audiobook I’ve ever narrated.

Seanan McGuire has been a huge champion for L&L on twitter and elsewhere, which is awesome. How’d you manage to score that?

I had nothing to do with it! Pure good fortune on my part. She saw my initial offhanded post about the cover artwork on Twitter and mentioned it – and then later picked up the paperback and said very nice things – and I will be eternally grateful to her. She’s an amazing author, and a kind person who looks out for others, and I hope I get to thank her personally one day.

Did you have any ambitions of traditionally publishing Legends & Lattes, or was indie pubbing it at first always the goal?

I didn’t – not even a twinkle in my eye. I only self-published it because I wanted to go through the full process many of the indie authors I work with go through, largely out of curiosity. I just hoped to pay for the cover artwork and sail obliviously on.

L&L has since been acquired by Tor. How’s that process going, and what can we expect from the trad-pubbed version due out in December?

It’s going well, and I’ve really enjoyed e-meeting everyone there. I can’t really say anything specific about the new version that’s coming – they’ll announce any particulars – but I’m excited to see how it all works out! They have all been very lovely and heroically getting things done in a VERY accelerated way.

So…we started with an obvious question. Let’s end with one. For symmetry! What’s next?

I’m knee-deep in preparing the next book, and generally mortally terrified now that there are actual expectations. I’ve got a pile of notes and a huge outline and I’m hoping to start in on the daily writing very soon…