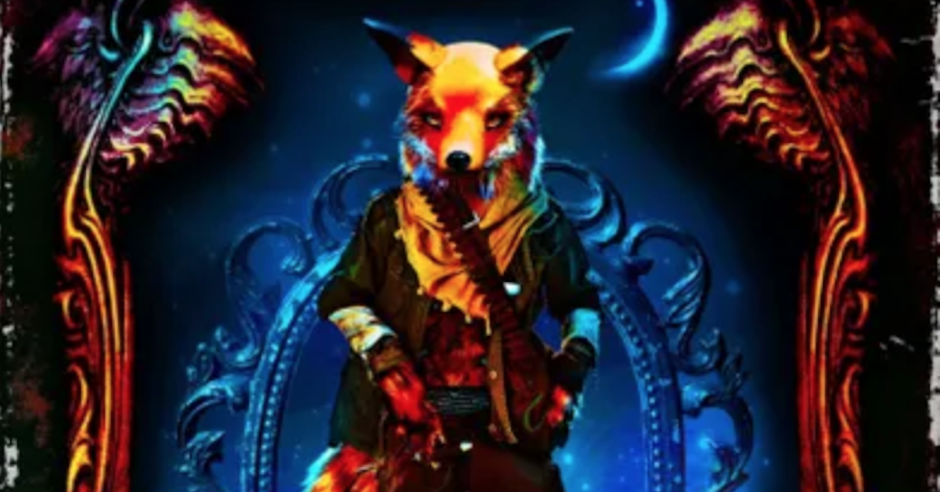 By jodie crumpJune 7, 2022No Comments

I am beyond thrilled to have the opportunity to talk with Josh Winning, author of the wonderful, nostalgia-filled fantasy adventure, The Shadow Glass.

Hello, Josh! Thank you for joining Before We Go Blog to talk about The Shadow Glass!

Thanks so much for having me! I’ll try not to mess with any of the nice things you have in here.

You don’t need to worry about ruining nice things, I like to talk with my hands while holding a full coffee mug. It is not pretty.

I’ll just pop on my waterproofs, give me a sec!

I enjoyed every nostalgic moment of The Shadow Glass. Will you tell readers a little bit about it?

That makes me so happy! The Shadow Glass is my debut novel and a love letter to 80s fantasy films like The NeverEnding Story, Labyrinth and The Dark Crystal. It’s about the son of a movie director who goes on a real-world quest with the puppets from his father’s 1980s movie flop, The Shadow Glass.

I was ready to start the book again the second I finished the last word. You had me cheering (and yes, tearing up a bit at parts). How did you balance the fun adventure with the deeper themes found in The Shadow Glass?

Cheering and tearing up are absolutely the two big things I hoped readers would get out of this book! I think that the great thing about those 80s fantasy films is the way they balanced adventure with grown-up themes – Labyrinth is all about a teenager coming of age, The NeverEnding Story is about grief and self-actualization. The best I could do with The Shadow Glass was try to capture a smidge of that same magic. For me, it’s all about emotional honesty, leaning in to the tough feelings and working through them with fun japes along the way.

You definitely did that! I loved how Jack’s anger and regret were directed onto Iri and The Shadow Glass. His grief seemed to be sort of reflected back with Zavanna’s own grief. Was that planned from the get-go?

Absolutely. Because Jack is sort of in denial, it just felt right that he should encounter somebody who has also lost a loved one (and, of course, the fun part is that that “somebody” is a puppet). Jack is forced to finally confront head-on his own loss and pain. I think it ties in with what we were saying about 80s fantasy films – the main character always learns something after going on their quest. Jack learns how to process that anger and regret, and he creates something positive out of that.

Many 80s fantasy movies take place in other worlds, but you brought Iri into the “real world”. What made you decide to bring the fantastical into the modern world?

The whole reason I wrote this book is because I love puppet fantasies, and I loved the idea of puppets coming to life in the real world. It felt like a fun spin on the fish-out-of-water trope – a little bit Small Soldiers, a little bit Jumanji. It also allowed me to be more satirical in tone. Even though the book is very much a fantasy, it’s also a commentary on fandom, pop culture and found families. It would have been quite difficult to explore all of that in any world other than our own!

Now I have to know: what did you think of the recent Dark Crystal show?

I. LOVED. IT. It got everything right! In general, I’m not a fan of prequels, but I felt like The Dark Crystal: Age of Resistance dodged a lot of the “prequel pitfalls”, partly because it introduced such a fantastic cast of new characters, but also because Thra has such a huge and fascinating lore to explore, it felt fresh and loving the whole way through. I loved going back to that world. (And any show that gives us a ton of Fizzgigs, plus Aughra being a badass, gets a huge tick in my book!)

I agree! I thought it was cool that the world and lore just grew while keeping the feel of the original. I am also so glad they didn’t go the CGI route. Also-and this is weird- I loved seeing that adult Toby Froud was involved (although his wardrobe was significantly less “Where’s Waldo”). Incidentally, did a certain character’s name come from baby Toby?

Oh yes! I sprinkled quite a few easter eggs throughout the book, and the biggest one was naming a character Toby. I couldn’t resist!

You included the most loveable band of fans! I liked that they had their own brand of family, something that I’ve been privileged to discover in my own fandoms. Was that based on your own experience in any way?

Well, I am a fan, and pretty much everybody I know is a fan of something nerdy and awesome, so it wasn’t a huge stretch for me to come up with the fans in the book. It’s funny, the Shadow Glass Guild came to me 100% complete when I first sat down to write them, and their chapters have barely changed since the first draft. I could write them for days, they were so great to hang out with.

Did you have a favorite character or part to write?

I’m more interested to know who your favorite character was! Honestly, I love all of the characters equally, but there’s definitely a special place in my heart for the villain, Kunin Yillda. She was just SO FUN to write. I love a baddie who is unapologetically evil, and it was so liberating to really dig into the grotesqueries of that character, without feeling like I had to dumb her down at all.

Kunin Yillda was such a great baddie! I liked that you had this flat-out evil character, but I honestly felt a little sorry for Cutter. He was an easy villain to pity.

I’m glad! I wanted Cutter to be complicated. I didn’t want the reader to necessarily know exactly how they felt about him – he does some despicable things but there is an inherent sadness to him, too. He’s clearly miserable! As much as I love an all-out evil baddie, I also love a baddie who’s emotionally and psychologically complex. With this book, I decided to do both!

My favorite character is a toss-up between Toby (I just loved his excitement, and he reminded me a little of a friend of mine) and Jack. Jack’s character development was through the roof! I love watching characters evolve, so he was a joy to read about.

That’s great to hear. I was worried that Jack would turn readers off at the start of the book, because he’s so bitter and dismissive. I’m glad that you enjoyed watching him evolve. I worked really hard on that!

Where any of your characters inspired by people you know (hopefully not Kunin Yillda)?

The lub is loosely inspired by my cat, Penny, who is both cute and deadly. The name of the Guild is inspired by my boyfriend’s cousins, who are really close and call themselves the “Guild”, too. (I know, adorable, right?) That’s about it. I try not to write characters who are too close to people I know IRL, as I’d hate to upset them! (Though I have, unfortunately, met a few Kunin Yilldas in my time…)

Such great inspirations (yes, the “Guild” is adorable)!

They’re as lovely in real life as they are in the book!

What was the most challenging part to write?

The Comic-Con chapters! There were SO many moving parts and pieces in that sequence. Pretty much every single character is present, plus there’s a huge room full of cosplayers, PLUS the baddies. Then when you throw in the idea of mind control and fighting… it was A LOT to get my head around. But I’m super proud of that sequence and so happy that it finally works.

One of my favorite recent book quotes takes place during the Con.. I did not expect to get a little choked up reading about a Comic-Con.

Well now I want to know what the line is!

“This wasn’t about using nostalgia as a shield, it was about celebrating the things that defined them, the characters that spoke to their heart’s truth, the things that made them different and unique and powerful in their own special way. It united them.”

I really, really loved that entire paragraph. It was wonderful.

Oh brilliant. I genuinely believe that nostalgia and fandom can be twin forces for good. And nostalgia is nothing new – just think about your grandparents getting misty-eyed over the days before cell phones. Everybody is nostalgic for something. I just happen to be nostalgic for puppets!

Would you like to see The Shadow Glass made into a movie?

Heck yes! That would be unbelievable. I wrote The Shadow Glass because nobody is making those great puppet fantasy films anymore, so if my book inspired a little genre resurgence (in the name of Jim Henson, of course), I would be very happy indeed!

If I found the last VHS store left, what are your must-watch 80s movies?

Oh wow, how much time do you have?! The main three I mentioned earlier are absolute must-watches – Labyrinth, The NeverEnding Story and The Dark Crystal. Other fantasy films I love from the 80s are Who Framed Roger Rabbit, Willow and Teen Witch (which is absolutely insane). Then there’s Gremlins, Back to the Future (the whole trilogy), The Goonies. And we haven’t even gotten to the John Hughes movies…

Labyrinth is one of my all-time favorite movies! I haven’t seen Teen Witch, though. I’ll need to fix that.

Oh, Teen Witch isn’t good! [laughs] But it’s VERY entertaining, and sort of a prototype for Sabrina the Teenage Witch. It totally does its own batshit thing, and I can respect that. Also the ‘Top That’ musical moment is jaw-dropping and must be seen by ALL.

Do you have any plans to write a sequel?

Not at the moment. I wrote The Shadow Glass as a standalone, so I have no sequel notes written down anywhere. There are a few little ideas percolating in the back of my brain, though, so if enough people demand it, I’m not sure I could resist reuniting with these characters for one more adventure. After all, I lub Iri!

Well, put me on the list of demanding people (usually, I prefer to avoid being demanding)!

Demanding can be good!

Do you have anything exciting in the works?

I’m very excited for my next book, Burn the Negative, which is being published by Putnam in the US in summer 2023. It’s another movie-themed novel, except this time it’s pure ’90s horror. The story is about a journalist who is sent on assignment to LA to write about a new streaming series, but when she gets there, she discovers the series is based on the cursed horror movie she starred in as a child. I can’t wait for people to read it! After that, well, if I told you, I’d have to kill you. Watch this space!