Luke Arnold "...Rather than being inspired by any particular time or place in history, it’s more about a feeling. A bit of guilt. A touch of depression. A regular spoonful of self-loathing. Sometimes it’s about growing up. Sometimes it’s about living in the aftermath of mistakes. It all depends on where Fetch’s mind is at."

Many people know actor Luke Arnold from the Starz TV show Black Sails where he plays the character, John Silver. But, to add to his extensive acting credits is his debut novel, The Last Smile in Sunder City. The first novel of the Fetch Phillips Archives series. If you haven’t had a chance to check out Sunder City, you should fix that ASAP. (My review can be found here.) Sunder City is a little bit of fantasy, a little bit Sam Spade, and a whole lot of good writing.

Hi Luke. Thank you for agreeing to chat with me a bit about your writing, life, and The Last Smile in Sunder City.

My absolute pleasure. Thanks for having me.

For the uninitiated, could you tell me a little about yourself and how you got into writing Sunder City? Have you always been a writer?

I’ve been working as an actor for most of my adult life. When I started out, all my creative paths were intertwined. I’d write things, act in them, direct them, and collaborate with anyone on anything. Then I was lucky enough to have some success in the acting world, most notably on a show called Black Sails, and gave that all of my focus for a few years. After that wrapped up, it felt like it was time to dig back into my own writing, so I put away some time and punched out the first draft.

In some ways, they couldn’t be more opposite. When you act on film, you really have to trust everyone around you and hope that you’re in safe hands. You work off someone else’s material on a set that someone else built, in a costume that someone else made, while you listen to direction and hand your performance over to an editor at the end of it. It’s about doing your homework, preparing properly, and then committing to this brief window of time when you try to be in the moment and deliver a performance worth capturing.

With a novel, you are the entire crew, and the window lasts as long as you need it to. For the most part, there is no collaboration, no outside input, nobody rocking up with a ready-made set or a beautiful coat to put on one of your characters. For better or worse, it’s all you.

To be honest, being able to bounce back and forth between the two makes me enjoy each of them even more.

The Last Smile in Sunder City was a remarkable story. I loved how the story is told through a series of interactions, both now and in the past. It was a compelling narrative device in describing how a character can change once crossing a pivotal moment in their lives. In Fetch’s case, it was the before and after the Coda. Did you plan for the story to be told in this fashion, or did the story change organically as you wrote it?

When I started writing this story, it was only the present-day part of the story: a man-for-hire searching for a Vampire in a broken fantasy world. I thought maybe I would do a bunch of these short cases, stick them together, and then do an origin story one day.

I shared the story with some friends in the publishing world and while they really liked it, they informed me that collections of short stories are nearly impossible to sell, and suggested that a novel would be a better path. Thankfully, I took their advice.

I think the scars of that process can still be seen on this story, but I kind of like that. It’s the same thing that happened to Raymond Chandler (my biggest influence when it comes to this book). Chandler wrote short stories for a magazine called Black Mask. Most of his novels were an amalgamation of those shorter stories, tied together and padded out.

My second book, Dead Man in a Ditch, is more tightly constructed, but for the first story about a hopeless, wandering gumshoe who only begins to find his way, I think the creative journey added to the tone.

How did you create the after Coda world? What was the inspiration?

A lot of the pre-Coda world (the magical time) was planned out before I started. I tracked the beginning of magic and thought about how it would seep into the world and create versions of all the magical creatures we’re familiar with. But in the post-Coda, a lot of it comes to life as I take Fetch around the city and see who he stumbles across. Rather than being inspired by any particular time or place in history, it’s more about a feeling. A bit of guilt. A touch of depression. A regular spoonful of self-loathing. Sometimes it’s about growing up. Sometimes it’s about living in the aftermath of mistakes. It all depends on where Fetch’s mind is at. He’s always struggling with some internal dilemma, and I love to make him bump into the perfect creature that will make things even worse. 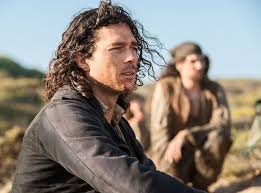 Are you a big fantasy and science fiction reader? Which books have you been inspired by?

I’ve always been a big reader, but I only dabbled in fantasy before this. I’ve been doing my best to catch up over the last few years. Most of the fantasy worlds that influenced me would have come from video games, anime, and film. I’ve been going through Final Fantasy 7 recently (remake, and replaying the original), and realized that it probably influenced Sunder City more than any book.

There’s plenty of Pratchett in my world, and I’ve stolen fantasy creatures from everywhere, but you’ll find more elements of Humphry Bogart than Hobbits.

One of the take-aways I had From The Last Smile in Sunder City was even under all the dark, the ominous, the despair, under the constant struggle to live, there is always a small shiny kernel of hope. As a reader, I am drawn to stories that have this; it helps me connect and want more as a reader. Was this always the intention?

Sure. I love playing with the expectations we have of fantasy characters versus what we expect of ourselves. In worlds with magic spells, evil villains, and ancient prophesies, we want our heroes to find the special sword, kill the baddie, and restore peace to the land. When you’re younger, our world seems so different to the ones in books that it feels like escapism. But as you get older, you realise that there are actually these looming threats coming to destroy the us and villains who cause suffering for their own gain, but the bit that we struggle with (at least I do) is what we can do about it. Could we be better? Does anything we do matter? Or could we wake up tomorrow and actually make a difference?

I don’t know how to fix the world (yet) but I do know that a shared moment with a close friend or a perfect cup of coffee will help me get up tomorrow and keep searching.

Can you tell me a bit about Dead Man in a Ditch?

The first book hints that the magic might not be completely gone for good. Of course, Fetch isn’t ready to believe that, but word has gotten out. Folks start arriving at Fetch’s door, asking him to find a way to fix things. That includes the police department, who invites Fetch to a crime scene where a guy’s face has been blown apart by a fireball.

With the stage set by the first book, Dead Man in a Ditch makes some big moves forward, though the shadows from the past are still hanging around.

Finally, I always like to end on a light-hearted question. The Dinner Party question. If you could have dinner and conversation with three figures from real life, alive or dead, or fiction, who would they be and why?

Jim Henson. I think Sesame Street is the most important television show ever made and everything Jim brought into the world has made it a better place. Maybe I’d get to learn a couple of things but maybe I’d just get to spend a couple of hours in his presence.

David Bowie (Similar reasons to Henson, really) and Nina Simone (because she seemed really disappointed at Montreux that Bowie wasn’t there, so I’d die to see them hanging out). And there would be a piano tucked in the corner, as if by accident, but I’d never ask anyone to play (until the second bottle of wine, when I absolutely would).

I know they’re all creative, but then I would at least have a chance of joining in the conversation. If it was Nelson Mandela, Marie Curie and Martin Luther King, I’d be outed as an imbecile immediately.

Tour – Interview With A.M. Justice, Author of A Wizard’s Forge

Interview With Cat Hellisen, Author of Bones Like Bridges

I am Beth. So nice to meet you!

Please see my review policy. I am currently not accepting any review requests for the time being. However my #Indiespotlight is open and accepting requests.

For Media/Pr inquiries please email me at beforewegoblog@gmail.com

My Coat of Arms