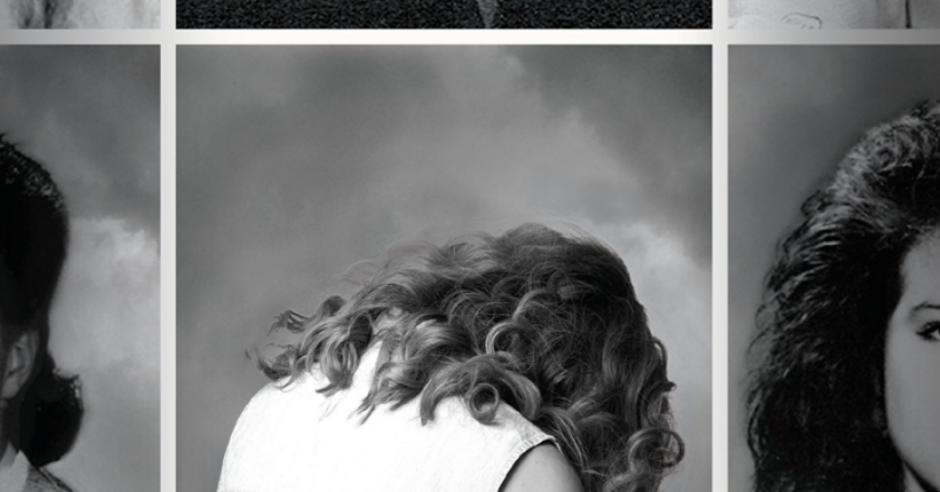 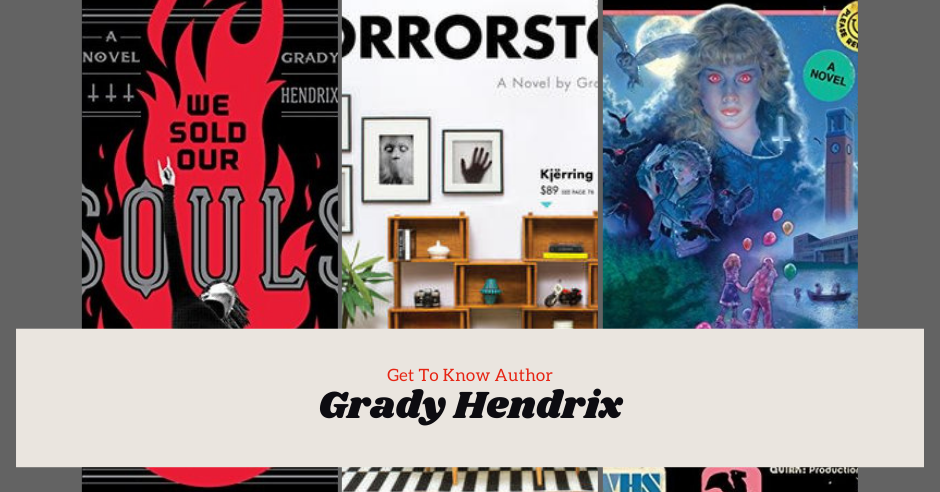 Grady Hendrix “My writing process could be defined as: mess. I start with tons of research, fill a couple of notebooks, develop a firm, 100% rock solid idea of what’s going to happen and it usually takes me a full draft before I toss all my notes and realize my research is useless.”

Award-winning author Grady Hendrix has written about a retail store gone to hell, the souls of a 90s heavy metal band named Dürt Würk, a book club in the south described as “Fried Green Tomatoes and Steel Magnolias meet Dracula“ and more.  He also has written the Bram Stoker Award-winning non-fiction book, Paperbacks from Hell: The Twisted History of ’70s and ’80s Horror Fiction. His books are full of equal parts tender and terrifying moments, but at the heart of them, there is something very appealing. When your readers can empathize with the literal retail hell in Horrorstör or the great joy Kris has listening to metal music in We Sold Our Souls, you know you have something special.

I had the great pleasure of having a chat with Grady about his upcoming projects, writing books with settings in the 1990s, retail hell, and more.

Hey Grady, you have a knack for writing women. I especially enjoyed Amy from Horrorstör and Kris from We Sold Our Souls. Although these two characters are put into implausible or impossible situations, there is an element of authenticity to their reactions. Do you connect better with a female protagonist as a writer?

All my characters need to have something that distances them from me so that I see them as a fully rounded three dimensional person rather than myself in a fiction suit. Often I’ll have a story that I just can’t crack then I’ll make the main character female and suddenly it works. Kris in We Sold Our Souls was originally Chris and it was my book about male anger, but then the 2016 election happened and I realized that if I wanted to have a character who had been told they didn’t matter in the slightest, it really only made sense for them to be a woman at that moment in time.

As a former IKEA employee, years, I worked there for years, do you have retail or service
industry experience? You nailed the ennui and general horror of doing a customer
service job day in and day out.

I couldn’t hack retail. I tried but I don’t have the guts, the skills, or the smarts, so I salute the retail warriors out there dealing with stained returns, unreasonable customers, and their terrible jokes. Valhalla awaits.

I also heard that Horrorstör was possibly being adapted to a film. If you could cast some of the characters from the novel, whom would you have to play them?

In terms of story creation, how do you write your books? Do you start with a single idea or single scene and work outwards in all directions or do you have a linear process and go start to finish?

A linear process? That sounds great! I’ll have to try it. Southern Book Club actually has two
entirely different versions that I finished before getting to the prototype of the version people read, and while it was deeply educational to write three books in order to publish one, it’s not very efficient. My writing process could be defined as: mess. I start with tons of research, fill a couple of notebooks, develop a firm, 100% rock solid idea of what’s going to happen and it usually takes me a full draft before I toss all my notes and realize my research is useless. Then I sit down, write backstories for every single character, write chapters about their lives I never use, and slowly weave my way towards something resembling a book the way a drunk walks a line during a field sobriety test. Then I rewrite and rewrite until my editor threatens me with physical violence, then I keep rewriting while they send the last draft off to the copy editor and block my email at which point I burst into tears.

Your newest novel The Southern Book Club’s Guide to Slaying Vampires the setting was particular and deliberate. What attracted you to this period instead of say, the early 00s?

Writing about the recent past is hard because the ‘90s are far enough away to be another planet, but close enough to not have an identity we’ve all agreed on yet. The ‘40s are the Greatest Generation, the ‘50s were squeaky clean, everyone loves the ‘80s, but the ‘90s are usually referred to as “the decade when nothing happened.” In reality, everything we’re living through now had its roots back then: the Anita Hill hearings were the first big public reckoning about sexual harassment, Bill Clinton got impeached (see also: sexual harassment), the world met Hilary Clinton, the banks were deregulated, the first World Trade Center attack, the first Gulf War, every major female singer songwriter released her first album (from Beyonce in Destiny’s Child to Celine Dion), reality TV was born, and the news cycle went 24/7. To give you a specific example: Wal-Mart started the decade with stores in only 33 states with $15 billion in sales. By 2000 it was the world’s largest private employer with $100 billion in sales. The ‘90s where the cause and the 2000s are the effects.

Tell me about a book where you first discovered the power of language?

Peter Ackroyd’s Hawksmoor, which is essentially a 1985 precursor to Alan Moore’s 1989 Jack the Ripper graphic novel, From Hell. Written half in 18th century English, and half in a sort of “Ramsey Campbell in a bad mood” urban bleak speak, I was way too young to understand even 70% of it, but the heady ideas and the psychedelic language shot lightning through my brain. Music plays a massive role in We Sold Our Souls as an appreciation for the genre of metal, and the connection one has to music as a part of their soul and who they are. Has music played a big part in your life? And why did you choose Metal as Kris’s genre? I think music is important in everyone’s life. We all soundtrack our break-ups and our summer drives to the beach.

We Sold Our Souls is about metal because I wanted it to be about a genre of music that gets no respect. Tell people you love metal, and they immediately rush to judgment.

I’m not a natural metalhead but metalheads are the sweetest, most generous people and they totally took me under their wings when I wrote that book. I have bar napkins covered in songs and bands and albums I need to try and I naturally I fell in love with metal while writing it. What is next? Is there another common horror theme you want to tackle and turn on its ear? I would love to read a body snatcher or plague book by you.

I’m not sure anyone wants to read a plague book for a while, but I’ve got a new, 100% coronavirus-free novel coming out in 2021 called The Final Girl Support Group about someone murdering the members of a therapy group for final girls. I’ve been working on this book since 2014 because I wanted to take the idea of final girls seriously. What does it mean when the worst thing that could possibly happen to you happens when you’re 16? How do you have a life after seeing all your friends killed? So many books and movies about final girls treat them as campy comfort blankets woven from warm, wooly nostalgia, but I wanted to take these women seriously.

Tell me about the non-fiction book you are writing?

My great lifelong love affair has been with Hong Kong movies and I’m in the middle of wrapping up a big nonfiction book about kung fu movies coming to America back in the ‘70s. It’s bristling with wild art, and my co-author, Chris Poggiali, and I have dug up a ton of unknown stories about everything from an 11-year-old boy who created a huge Bruce Lee blockbuster, to Japanese judo teachers being rounded up and sent to concentration camps and what that has to do with Jimmy Cagney. It’s been a wild ride.

I also wish more people read Vernon Lee, who wrote lush, psychologically precise stories about ghosts, blending them with liminal mental states like dreams, madness, and memories to paint a detailed portrait of the human mind. Lee loved life, and was always hungry to learn more, to see more, to do more, and her sentences come without the accumulation of dust or the tortured
constipation of James. If she was a man, we’d read her A Phantom Lover rather than his Turn of the Screw. And while Ken Greenhall wrote some great horror novels like Hell Hound, Elizabeth, and Childgrave, all those recently came back into print. What hasn’t come back into print is his final novel, Lenore, which broke his heart and convinced him to give up writing. It’s about the freed slave who posed for Rubens’ 1617 painting, “Four Studies of the Head of a Negro” in Amsterdam and it’s one of the funniest and most surprising historical novels I’ve ever read. I’d honestly put it up there next to Hilary Mantel.

Is there another genre outside of horror, and non-fiction that you would like to write in?

I think horror is one of those genres that can absorb anything into its disgusting oozey body, whether it’s politics, comedy, romance, or historical fiction but I’ve got two horror novels that I’ve been trying to convince publishers to let me write for ages. One is about marriage, and one is about 19th century mediums. For some reason, they seem to think these are “risky” when to me the only risk is doing the same thing over and over again.