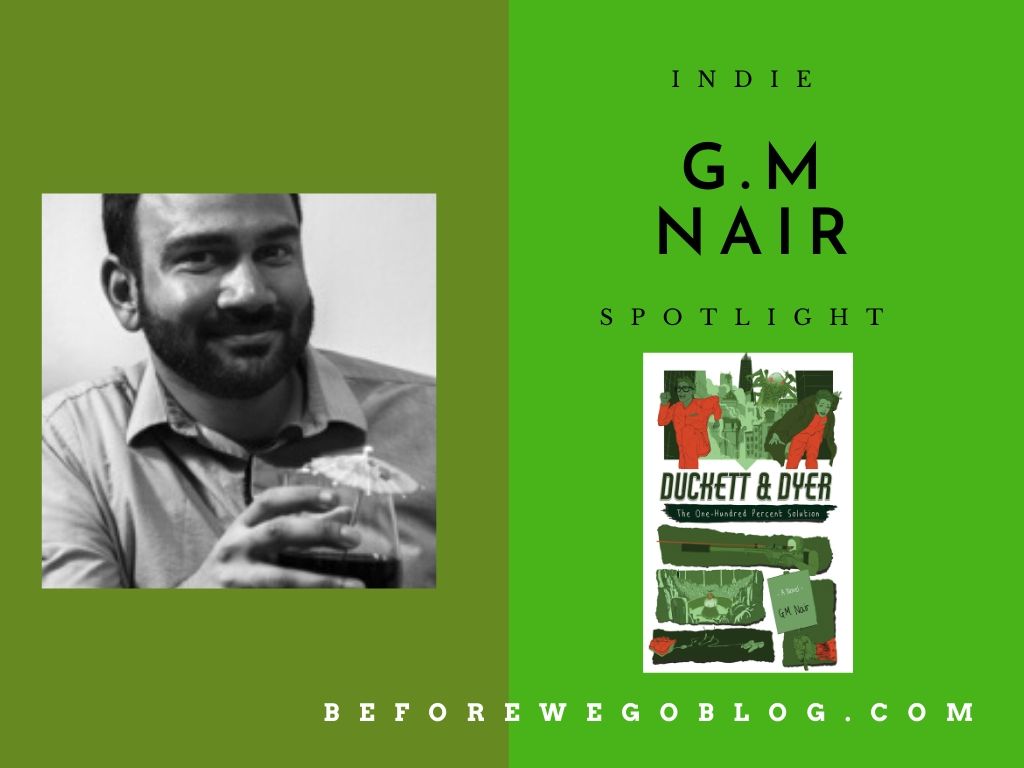 G.M Nair “…These early drafts sucked. They sucked out of control..”

I’ve had my leg in two different canoes for a while now. Writing comedy for the stage and screen – mostly in sketch form – and attempting to write a novel that I’d been working on for years: Duckett & Dyer: Dicks For Hire. As anyone who writes sketch comedy will tell you, you need to get out jokes early, quickly and time them for the greatest impact. For the first few drafts of Duckett & Dyer, this philosophy influenced my thinking to a great extent. It’s a funny novel (depending on your taste), so the jokes came hard, they came quick and they came fast, with little regard to anything else except for a tight, if sometimes twisty, plot.

These early drafts sucked. They sucked out of control.

It was early days, so I still had a lot to learn. A long way down the river, if you want to go back to that canoeing metaphor. And although it took me 4 years to see Duckett & Dyer to completion, it was absolutely worth the time spent. During those years of redrafts, I found that the book lacked a certain earnestness. The sketch comedy-style jokes were all well and good since they infused the book with personality, but, unlike the characters or caricatures of sketch comedy, the characters in my novel – the titular Michael Duckett and Stephanie Dyer – were not meant to feel as disposable.

Over time, as I endured the brutal process of aging, I found that the experiences of my friends and I were a wellspring of context I neglected to even consider for my novel about two best buds going on crazy adventures. Although my friendgroup had been close for years, as we barreled headfirst toward the wrong side of 30, I started to learn more about them. Things I’d never thought about asking them, which helped me realize that there’s a lot of things we keep hidden from people we’re close to – for one reason or another – and simply being there and hanging out sometimes just isn’t enough. We need to take real time to understand one another, because often times we may just be scratching the surface of a much bigger iceberg. (I guess we’re canoeing in Iceland, now)

Transferring that elder-millennial life lesson – that teachable moment of understanding – into Duckett & Dyer really transformed the characters from two-dimensional joke vehicles into a real, living, breathing relationship. Unlike me, Michael Duckett learns this lesson of true platonic empathy a tad bit too late (spoiler alert), but, in the end, he is better for it.

…and then I kept layering in the dumb jokes, because – like Michael and Stephanie – the earnestness and wackiness are the perfect things to play off each other. But, in this case, I couldn’t keep one separate from the other.

Now, with the release of my sequel The One-Hundred Percent Solution, I’ve had another year and another book cycle to really let these ideas and methodologies marinate my brain and seep into my writing. Writing the second book was both easier and harder at the same time, because I’d already done the heavy lifting of introducing the characters and their mindsets in the first one, but had to move them forward with new arcs and new challenges. It was a really weird feeling, but not as weird as when I realized people actually wanted to see more of them.

But I digress. The point is: two canoes aren’t going to get you anywhere. But tie them together to make a raft, then you’re onto something.

Aw, crap. I forgot the oars in my metaphor.

Hmm…how about metaph-oars? Is that a thing?

I’m gonna need to workshop that one. Let me get back to you.

Because when nothing really matters…then everything matters.―

What It Is About

What It Is About

The Future Group is the city’s biggest and most lucrative company even though no one really knows what it is they do. Michael Duckett has worked there for four years and he still has no clue. All he knows is that he hates his meaningless job and all the people in it. But it pays the bills. Bills that have been stacking up since his roommate and best friend Stephanie Dyer decided to open a detective agency – despite her chronic inability to commit to anything.

When Michael is suddenly fired, he and Stephanie are forced to return to the world of private investigation against his better judgment. A mysterious woman wants to enlist the services of Duckett & Dyer: Dicks For Hire to track down an assassin who has a bone to pick with Michael’s former employer. Apparently, The Future Group has been harboring a deadly secret for decades. One that could put the world in the grip of an indescribable horror.

It turns out Michael was lucky to get out of that job alive. Too bad he and Stephanie are being dragged back to work.