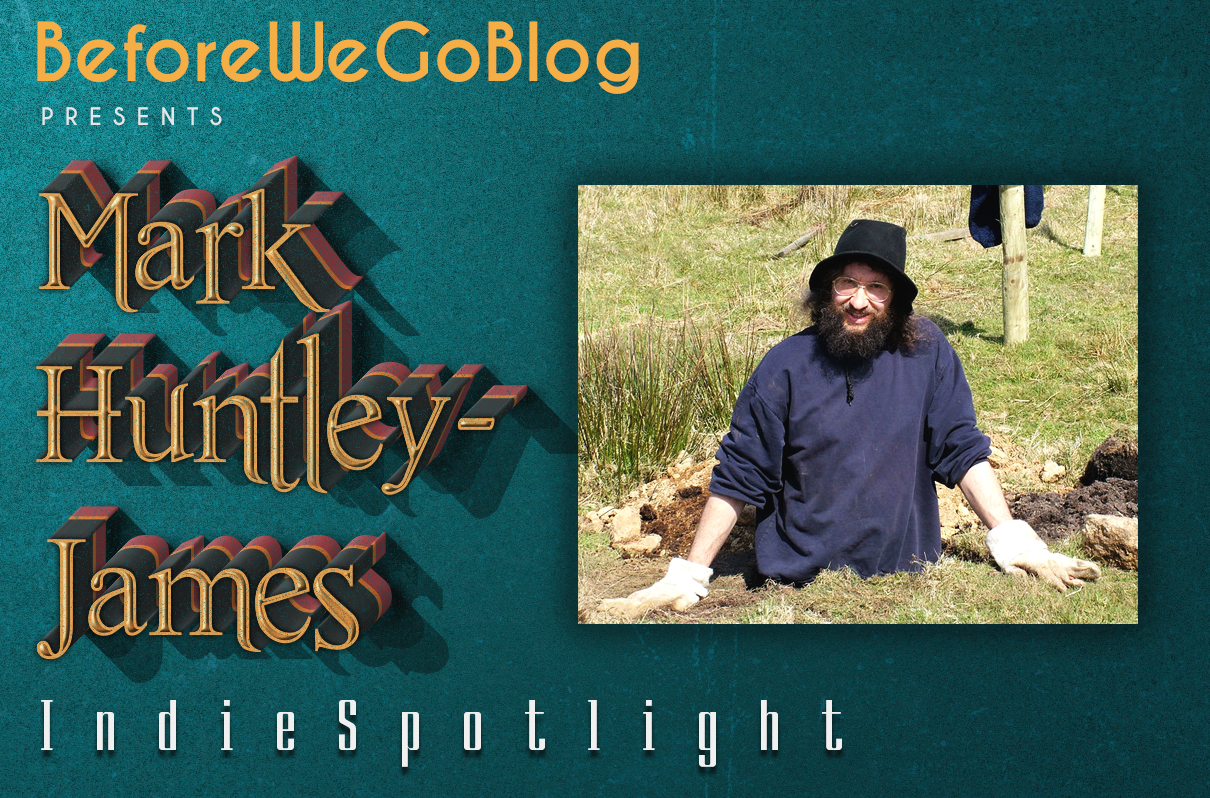 By Beth TablerAugust 30, 2019No Comments

“ Lots of small ideas can make a plot, but I don’t feel they make a story on their own. ”

I don’t have big ideas, just small, disposable and sticky ones which gradually clump together into something that looks like a big idea, in the right light. When I started writing “Hell of a Deal” it was only a tiny idea – I passed a shop called Monica’s and wondered what they would be selling if they were Demonica’s. That was it. The idea. If I hadn’t been nearly home, I might not have jotted it down before it snuffed out.

What I actually wrote, on a whim, was “everyone has their demons, but I buy mine wholesale.” That pretty much encapsulated the initial idea, and led me to another, my shopkeeper, a self-proclaimed master of the dark arts, but as ideas go still nothing more than a grain of sand looking for some cement. A few pebble-sized thoughts were needed to give the mixture somebody. Lots of small ideas can make a plot, but I don’t feel they make a story on their own. There needs to be an overarching theme that helps me sift the small ideas, pick out the ones that have a place and pile up the rest for another day. I very rarely start with an overall idea for a book, but I don’t think it can ever come together until I have one. In the wastelands of my computer, I have plenty of idea-piles, some with thirty or forty thousand words attached, but they are going nowhere until I have that spark that says what this book will be about.

Fortunately for my shopkeeper, as I stirred the small stuff, I found my anti-hero, the broker of demonic deals running his business in a quiet little English rural town. He’s definitely selfish, naturally isolated by the nature of his trade, more than a bit full of himself, and has a stripe of decency that’s been painted over so many times it’s no longer visible. It
took me a while, but there was my real theme – what would it take for this self-absorbed shopkeeper to make a stand, put his life on the line, risk everything and step up when needed? Now, as the third book is passing through its final edits, I have an answer of sorts – a half-nelson, a gun to his head, or perhaps circumstances so bizarre that he has no choice but to shine like a hero, just for a moment.

In Hell of a Deal, I gave him friends – he hadn’t had those before. And I gave him a potential girlfriend whose mastery of the dark arts makes him look like a beginner – not just a possible life-partner, but a serious rival and possible life-ender. On one level, I gave him the sort of challenges any protagonist needs, but more importantly, I gave him what every anti-hero needs: people to care about. Without that, when the world is headed for demonic destruction, it would have been every anti-hero for himself. For the second book. Ooops. I never planned for a second book. I wouldn’t have bothered but someone asked about a sequel. The thing is, I wrote a humorous urban fantasy with a story arc complete in one book. I didn’t leave anything obvious to follow on, except for the potential girl-friend, and a world messed up with demons walking the streets by night.
There was nothing there that called me to write.

To borrow a phrase, with great power comes the certainty of great stupidity. Step away from the anti-hero and put down your preconceptions, or something like that. Everyone in his town knows my man saved the world, so when the local entrepreneurs look to the demonic as a low-cost solution to the town’s parking problem, he can iron out the wrinkles. Or if a local lad has a brilliant idea for a Vampire Safari, my anti-hero is clearly the man to do the safety-inspection.

Even so, those are just plot, not themes. Perhaps I’m getting better at this, but I found themes of family, loyalty and awkward friendships to tie together the inevitable disaster of involving demons in traffic enforcement. As for vampires, well that had to be about teenagers, relationships and false perceptions. Now that I am about to release book three, it’s time to start pulling together a theme for the fourth – it’s definitely about relationships and the end of the world, that’s a given, but I can feel something more nagging away in the back of my head. I need to stir the small ideas until they fall into line. There’s a big idea out there somewhere, and I’ll know it when I see it.

“Please remember, there is no such thing as safe sex with a demon.”

“Everyone has their demons, but I buy mine wholesale…”
Paul Moore, shopkeeper, Master of the Dark Arts and demonic broker, has just met the hottest witch who ever tried to kill him. A date is surely out of the question – she serves the demons of the Babylonian Triad, and no-one defies them… almost no one.
Paul thought he was the best, until the Babylonian Triad launched a turf war. Rival demons, competing traders, an explosive spice and ruthless church factions… Paul only wants to keep his home town safe and get the girl. He knows that being a Master of the Dark Arts involves sacrifice, but really doesn’t want to be the one dragged to the altar.
Hell Of A Deal is a fight through life, death, demons and trying to survive a first date. It’s not the end of the world, just the start of a new corner of hell.

(Hell Of A Deal was previously published under the title ‘Demonyka’)

Paul Moore, former demonic broker and master of the dark arts, has a demon inside him – he’s not possessed, but a living prison, and any use of magic could let the demon loose, killing Paul and destroying the world. Now, the prisoner is talking – Let’s make a deal, idiot mortal…

Paul (and his name) have been co-opted to front an insane scheme to use the supernatural for traffic enforcement, all part of being the unofficial demonic troubleshooter for Barrowhurst-under-Helltide. It’s unpaid, the hours are awful and it interferes with being boyfriend to the beautiful uber-witch Simone.

The Moore Traffic Plan is fully functional, perfectly safe, highly efficient and has only one flaw – it is the invention of a demon-killing ancient evil intent on ripping Simone’s huge power from her cold, dead hand and using it to settle some scores.
All Paul has to do is defeat the ancient evil, save his girlfriend and defuse the Moore Traffic Plan before it ends the world and his reputation – all against impossible odds and without magic.

Forget the paving on the Road to Hell, the Demon Nyka is offering a shortcut called Temptation: Become my priest, little mortal, take the deal and together we can do magic safely…

“No such things as vampires” – Paul Moore, forcibly-retired master of the dark arts, gets himself quoted in the local newspaper, saying something stupid. This is Barrowhurst-under-Helltide, the magically turbo-charged playground of hooligan demons, pliable reality, and karmic inevitability.
Paul’s latest task is to inspect the newly-built Lower Barrow Farm Vampire Experience. Just a basic safety-check, because it’s only a bit of harmless fun, right?
Arthur is eighteen, the star vampire with special effects powered by a new flavour of magic, and deeply in love with Bessy the Vampire Slayer. But Bessy only has eyes for dragons, and a very nice girl from out of town.
So what do foolish, angry, spurned adolescent boys do?
They conquer lands, build empires, or burn them to the ground… with their magical glamour dialled up to hell-mark one thousand.
All Paul has to do is put out the metaphorical fire, fight almost-vampires, save his girlfriend’s dragon, find a magical book, fix drains destroyed in a demonic explosion, and generally save the world.
Once again, Paul Moore is cleaning up the mess in Barrowhurst, where Armageddon means not having to wash the dishes.

Mark Huntley-James started writing in his teens – just because he likes stories, reading them, telling them, writing them…

He trained as a physicist and worked in R&D for a number of years before moving to commercial software development and now lives on a smallholding on the edge of Bodmin Moor with his partner, multiple cats, chickens, geese and a flock of rare-breed sheep.

In between all of that he learned to clog dance, spent weekends as a pikeman in 17th century battle re-enactments and kept bees for several years.

In 2013 he won first place in the British Fantasy Society Short Story Competition.

The most important thing he has learned from rural life is that when you are in a hole, start taking notes because there is bound to be a story there somewhere.