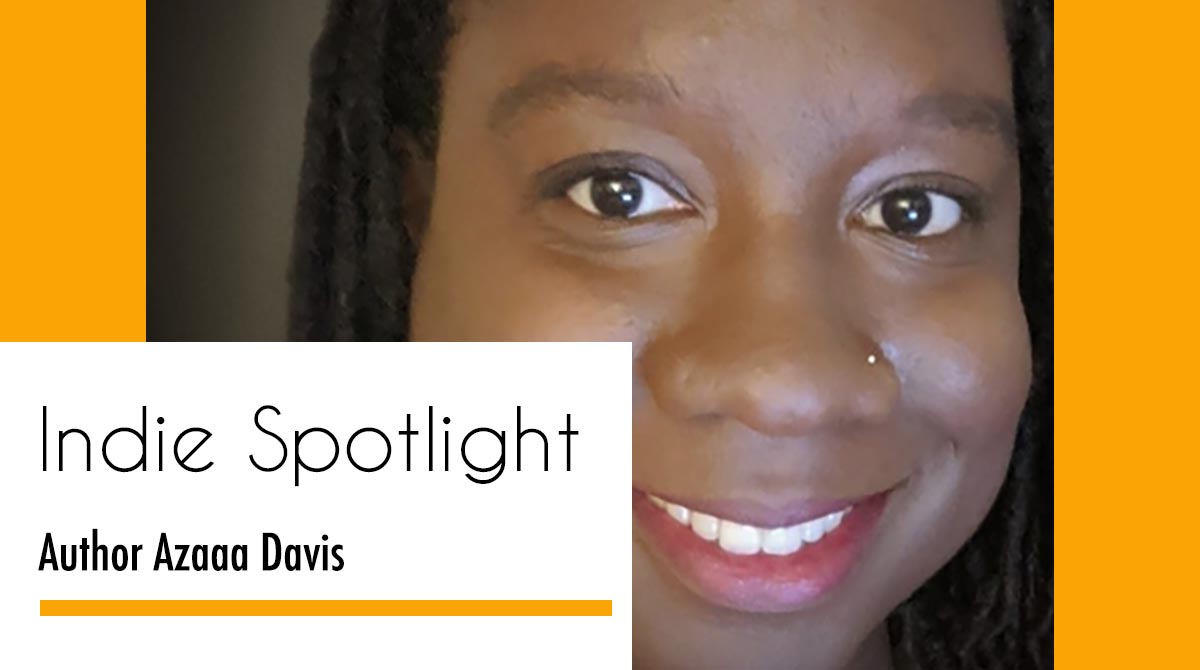 By Beth TablerOctober 20, 2019No Comments

Independent Azaaa Davis if you a look into the process of creation for Nadira Holden.

“For the love of all things seasoned, it’s Na-di-ra! Nadira!”

– This Time by Azaaa Davis

“I hope you give the Nadira Holden, Demon Hunter novels a try and enjoy reading them as much as I have enjoyed writing them. “

The big idea in my Nadira Holden, Demon Hunter book series is self-acceptance and self-worth.  The urban fantasy book series follows a resurrected demon hunter that’s asked to save humans from demons. The shadow organization that raised her figures she saved the world once before and so she can do it again. Except for the fact that this time things are quite different. Humans and demon have made peace, live alongside each other, and share magic and technology. Humans celebrate the beautiful and seductive demons and crave the use of magic. Nadira is among the few that still see them as monsters. Too bad it’s now illegal to slay them.  Throughout the series, Nadira is exposed to demons and the demon world in new ways that help her see them as complex beings instead of evil creatures. She is also forced to take a long look at her organization and family. She starts to see the flaws, the lies, and the betrayals. As she begins to question what she’s been taught to believe and grow suspicious of those she used to trust, Nadira makes some questionable choices and heads down a path full of regret.  I’ve enjoyed creating a complex main character that is both strong and flawed, both moral and vulnerable. Nadira and the diverse ensemble of characters that surround her are a joy to read about and root for. Some characters are simply loveable, others are disgusting, and a few you will love to hate or hate to love. Nadira is a character that grows on most readers over time. Her inner battles are just as epic as her bad-ass, action-packed fights with the demons that prey on humans.  When someone is as undeniable flawed as Nadira, acceptance from others and herself is in short supply. Her mission to gain more knowledge and power unexpectedly allows her to examine the parts of herself she hates. Over time, readers are rewarded with Nadira’s believable and endearing journey towards self-acceptance and self-love.  While I started out wanting to create a kick-ass, empowered, female main character, I somehow created a main character that felt far more real. I originally thought my themes would be good versus evil and the power of love. Little did I know, I was barely scratching the surface of the depths of my story and main character.  From draft one to draft four, and from book one to book three, I’ve seen so much growth in my storytelling abilities and in the potential for my characters to truly resonate with readers.  I hope you give the Nadira Holden, Demon Hunter novels a try and enjoy reading them as much as I have enjoyed writing them.

“Nadira woke up encompassed in emptiness.”
― Azaaa Davis, This Time

All Nadira Holden wants to preserve the last of her soul and create a new life free of magic, demons, and war.

Her involuntary bond with a succubus makes her desires impossible. The threat of this disgruntled demon possessing her urges Nadira to find the succubus’s missing body.

Nadira’s only hope of avoiding demonic possession lies with Derek, the only demon she can tolerate without slaying. Except, his hands are full trying to secure his recently-inherited title of prince. Desperate, Nadira agrees to help Derek secure his title by experimenting with the deadly magic they once generated in exchange for his aid in her investigation.

To untangle herself from the evil that surrounds her, Nadira must be willing to betray her friends and get cozy with her enemies. She may even have to do the unthinkable: break the peace treaty that allows demons and humans to coexist. If she can’t toss aside her scruples, Nadira may not make it out of this ordeal with her soul intact

Praise for the Nadira Holden Series

PRAISE FOR THIS TIME

“I have few words for this story:

Characters….GREAT. Realistic, strong, powerful…loved them.
Story…Interesting. Azaaa did a FANTASTIC job writing her story.
World building…well done. I was in the story the entire time, and I was sad when it was over. Keep writing Azaaa!”

“This Time started out with a heart-gripping scene but I also thought that it was a great way to understand where Nadira Holden’s state of mind was.”

“Each time I thought the plot had thickened, it just got more interesting…Quick and light…I found myself smiling through a lot of it.”

PRAISE FOR THAT NIGHT

“This novel has an amazing plot and storyline, where we meet a young woman who had spent her younger years training to be a Demon Hunter. Through a set of very unusual events, Nadira finds herself bound to a demon (a succubus) who has just as much influence and power over her body and spirit as her natural self does.”

Azaaa Davis is a writer of urban fantasy novels.

She fell in love with reading as a high school freshman and continues to read, write, and draw today. Her background in social work helps her portray realistic characters in otherworldly—and sometimes terrifying—situations. A New York native, Azaaa currently lives in New Hampshire with her husband and daughter.

She debuts with This Time, A Nadira Holden Novel, about demon hunters, family ties and the magic of love.

She is working diligently to finish writing more fantasy novels.