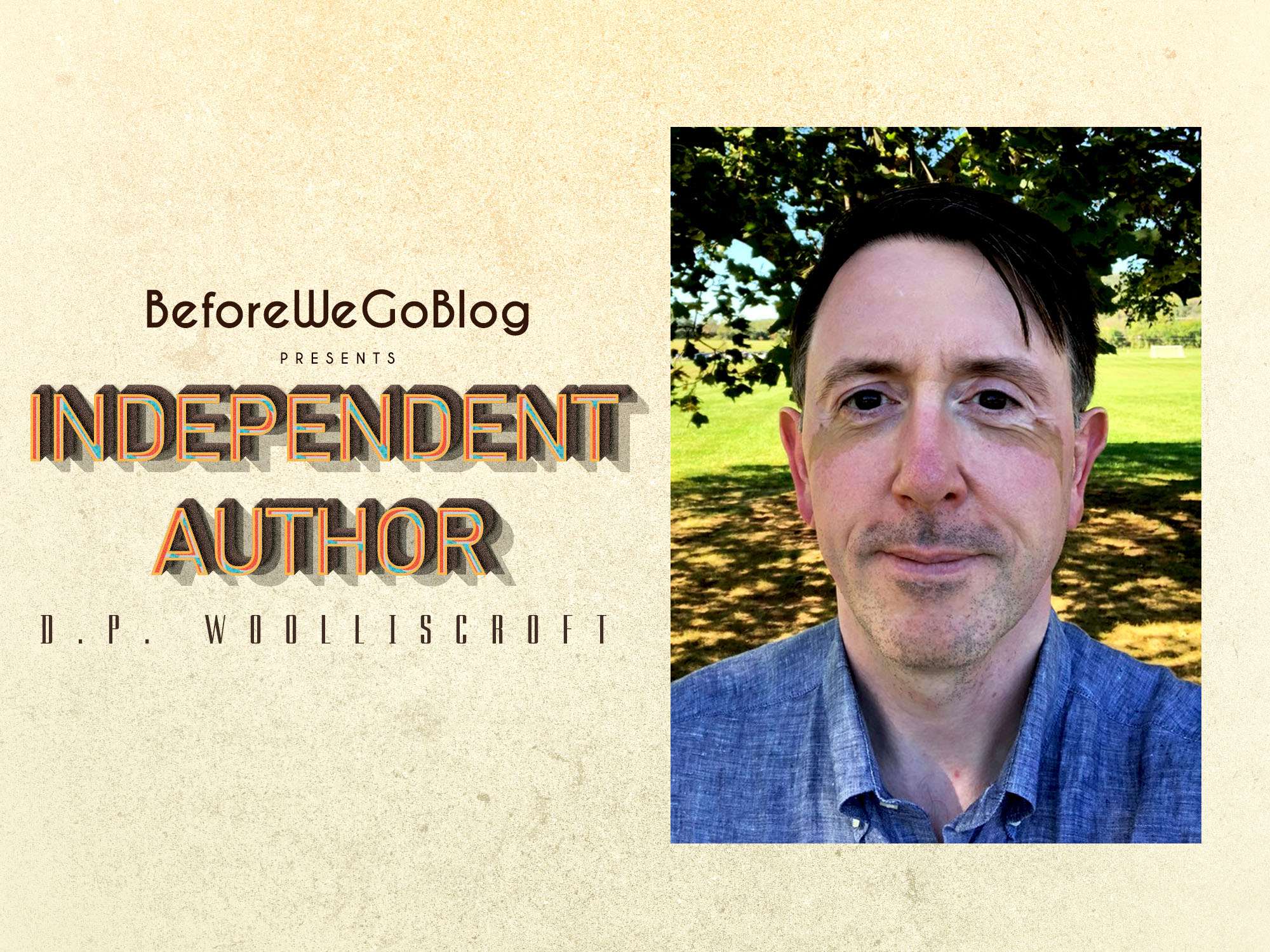 Independent author D.P Woolliscroft talks about his motivation for writing Book 2 of The Wildfire Cycle.

“Stay flexible like the reed, bending in the wind of life; continually question your destination.”

I always wanted to be a writer but I grew up in a very working-class background in the Midlands of the U.K. and I never thought that was an option for someone like me. That was for people with confidence in themselves (obviously I had never met any actual writers then!) and ways to support themselves. So I left that dream behind and did the sensible thing of going to college and getting a degree that would get me a good job.  Not being poor won out over taking a risk.

For more than 25 years I was content with merely being a consumer of fantasy, writers of all kinds, and in particular snaffling up anything that Terry Pratchett published. And then 2016 happened.  The world went crazy. Democracy seemed like it was broken. There was the Brexit referendum in the U.K.  There was the deeply disturbing election in the US that led to Trump winning. And one day I found myself wishing for a benevolent dictator like Lord Vetinari. It made me wish that Sir Terry had tackled democracy in a fantasy setting before he left us. But he hadn’t. So, I realized that if I wanted it, then I’d have to write it myself.

Now the thing is that I don’t write pure satire or comedic fantasy, but there is the kind of humor that I grew up with. The dark everyday laugh at the absurd and the powerful. All tied together into an epic fantasy that may feel initially comfortable, because I use some traditional tropes, but then I turn them on their head. There is no chosen one. No coming of age story (I am so tired of that). There are multiple POVs but the person who you think is the protagonist is not. And Kingshold, the first book in the Wildfire Cycle that tells the story of an election in Edland, all takes place in one city over just twenty-eight days, and yet still feels part of something much bigger. A bigger, broader story that encompasses themes that I care about; like the everyday pettiness of people in power, like how the simple emotions of jealousy and spite can lead to great evil, like politics. and religion, and how people from humble beginnings can have so much potential. All while making it fun. Making it feel like an adventure if you want to just ignore that bigger stuff. You know, a good dose of pirates, magic, monsters, fights and roof top chases. That stuff is important too.

And because I am indie author, and I can do whatever I like, I’ve decided to do something different with the approach to telling this story that is the Wildfire Cycle. Something that is likely completely uncommercial. After each main book of the series, I am releasing a .5 book of short stories that link the major numbered books; providing more back story to the major characters, or introducing new characters, or truly acting as a bridge between books where important, critical, events occur. I realize that lots of people don’t like short stories. In fact, almost every goodreads review for Tales of Kingshold begins “I don’t normally like short story anthologies, but…” before they go on to explain how much they loved the stories. And I love that!! But boy is it difficult to get people to take the plunge.

nning at. Now they have to deal with being in a situation where the deck has been stacked against them for decades if not centuries. Which I think is a situation that many of us in the real world can all to clearly understand.

That’s how I feel about many things in life. It’s what I worry about for my daughter as she grows up. On a much smaller level, it’s what I worry about as I am writing the next .5 book, Tales of Ioth. Is this series of books going to work with a readership that is used to consuming something very particular? They tell you as an indie author to write to market and I’m definitely not doing that.

But I remind myself that’s ok. It’s good to try to do something different, to try a less traveled path. Because I know that this journey will be something that will be remembered by those who join me as a special kind of trip, the kind where you make strange friends who made you smile and cry at their stories, the memories and thoughts lingering with you long after you are home in front of the fire.

“So far, their journey had been through a pie shop run by a man called Dibbler” 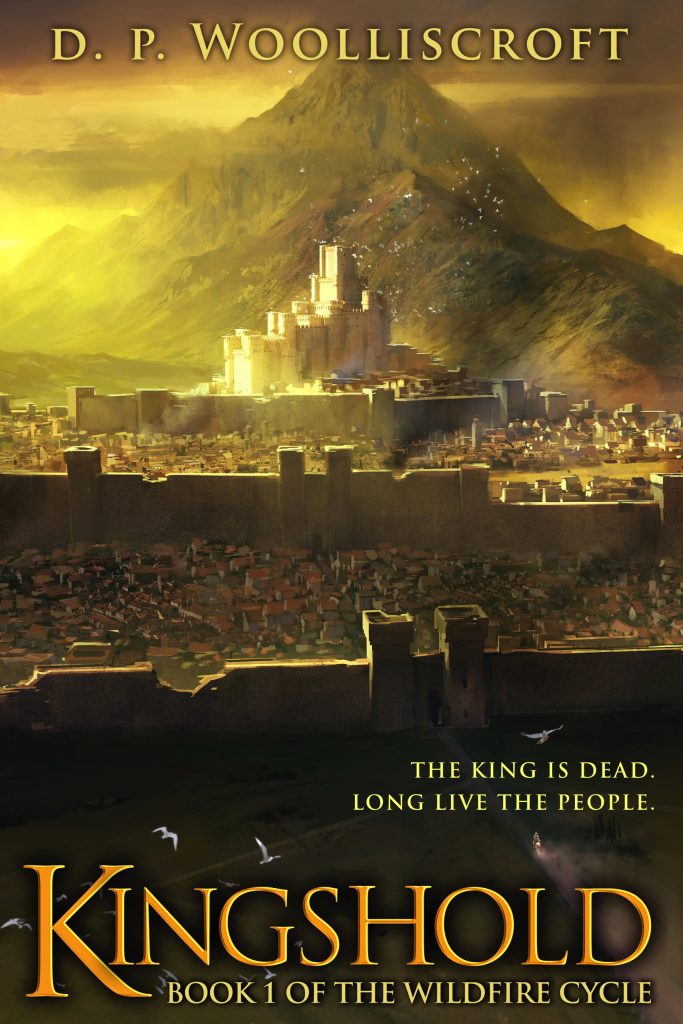 Mareth is a bard, a serial under achiever, a professional drunk, and general disappointment to his father. Despite this, Mareth has one thing going for him. He can smell opportunity. The King is dead and an election for the new Lord Protector has been called. If he plays his cards right, if he can sing a story that will put the right person in that chair, his future fame and drinking money is all but assured. But, alas, it turns out Mareth has a conscience after all.

Neenahwi is the daughter to Jyuth, the ancient wizard who founded the Kingdom of Edland and she is not happy. It’s not just that her father was the one who killed the King, or that he didn’t tell her about his plans. She’s not happy because her father is leaving, slinking off into retirement and now she has to clean up his mess.

Alana is a servant at the palace and the unfortunate soul to draw the short straw to attend to Jyuth. Alana knows that intelligence and curiosity aren’t valued in someone of her station, but sometimes she can’t help herself and so finds herself drawn into the Wizard’s schemes, and worst of all, coming up with her own plans.

Chance brings this unlikely band together to battle through civil unrest, assassinations, political machinations, pirates and monsters, all for a common cause that they know, deep down, has no chance of succeeding – bringing hope to the people of Kingshold. 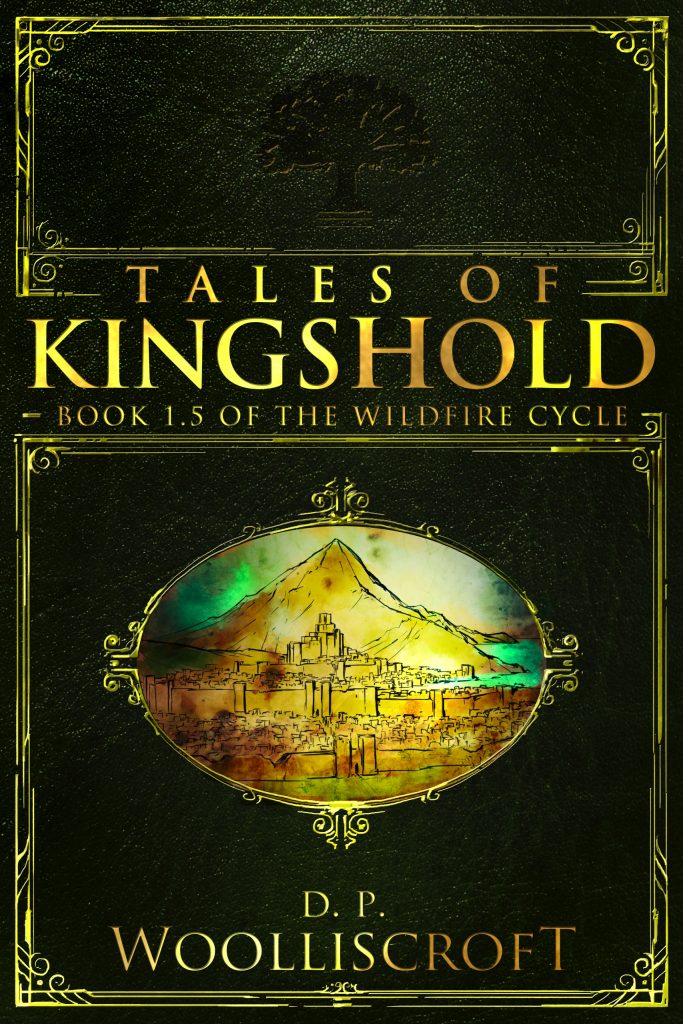 I am Mareth and I collect tales – tales that do not make the official histories. Join me and learn the secret stories of those who sparked the wildfire. Stories from our past, from that fateful summer and its aftermath. 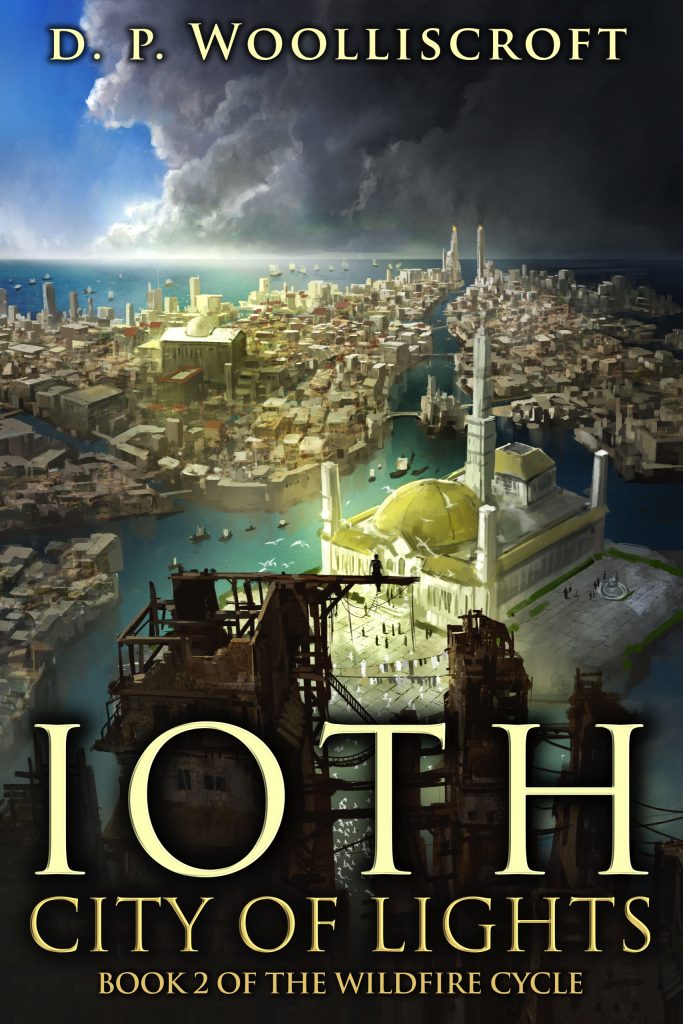 Be careful what you strive for.The people won and now Mareth is Lord Protector of Edland. But winning an election is a lot different than governing a country, especially when the empire of Pyrfew is expanding into the Sapphire Sea. In the interests of peace, Mareth must dispatch Alana to Ioth, city of a thousand lights, to convince the ruling merchants to turn their back on the empire. Neenahwi, armed with the knowledge revealed to her in her coming of age ceremony, desperately wants to determine Pyrfew’s plans and to take the fight to the emperor. But Llewdon, ancient elven emperor of Pyrfew, has had decades to develop his schemes and his agents are embedded in the least expected places. Everything seems to revolve around the disappearance of Jyuth’s master a millennia ago. Will the heroes of Kingshold be able to survive fire belching ships, strange slimes, sinister doppelgängers, demon dogs, greedy merchants and past vices to lead Edland to safety?Following on from Kingshold and Tales of Kingshold, read the much anticipated next chapter in the Wildfire Cycle, compared to Michael J. Sullivan, Brett Sanderson and Daniel Abraham.

Praise for the Wildfire Cycle

“Enchanting, thrilling, and funny…a refreshing departure from most cookie-cutter fantasy realms… characters are fresh and intriguing, instantly memorable…you are going to love this book”

“Each time I thought the plot had thickened, it just got more interesting…Quick and light…I found myself smiling through a lot of it.”

This is a novel which challenges definitions… a story told with wit, pace, exciting and well-defined characters and in a style that feels so wonderfully relaxed and easy to read. Wow.”

Phil Parker, author of The Bastard of Fairyland

PRAISE FOR TALES OF KINGSHOLD

“Woolliscroft managed to put together a wide selection of genres , topics, characters ensuring everyone will find something endearing to them. Be it heartwarming tale, pirates, zombies, magical creatures or plenty of fights. Tales of Kingshold has them all”

PRAISE FOR IOTH, CITY OF LIGHTS

“Woolliscroft has increased the scope and stakes considerably from the first novel, while still maintaining his tight focus on character. The different threads weave into a tense, exciting, explosive finale that left me awe-struck and wishing that I could read the next book in the series right this moment.” 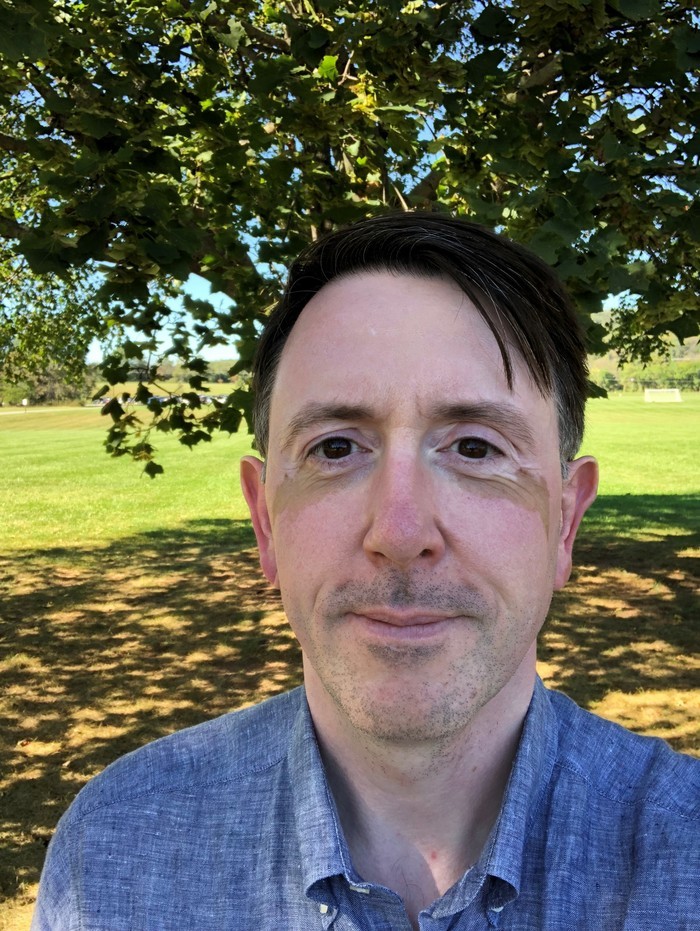 Born in Derby in England, on the day before mid-summers day, David Peter Woolliscroft was very nearly magical. If only his dear old mum could have held on for another day. But magic called out to him over the years, with a many a book being devoured for its arcane properties. David studied Accounting at Cardiff University where numbers weaved their own kind of magic and he has since been a successful business leader in the intervening twenty years.

Adventures have been had. More books devoured and then one day, David had read enough where the ideas he had kept bottled up needed a release valve. And thus, rising out of the self doubt like a phoenix at a clicky keyboard, a writer was born. Kingshold is David’s debut novel and Tales of Kingshold, companion short stories to the novel, are flooding onto the page as fast as David can write them.

He is married to his wife Haneen and has a daughter Liberty, who all live with their mini golden doodle Rosie in Princeton NJ. David is one of the few crabs to escape the crab pot.

You’ll find cool stuff like maps from the series, the glossary (for those of you who listen on audiobook) and excerpts from both Kingshold and Tales of Kingshold. Additionally, you can sign up for the Kingshold Town Crier and get Of Buccaneers and Bards, a Tale of Kingshold for free.

Links to join me on the journey