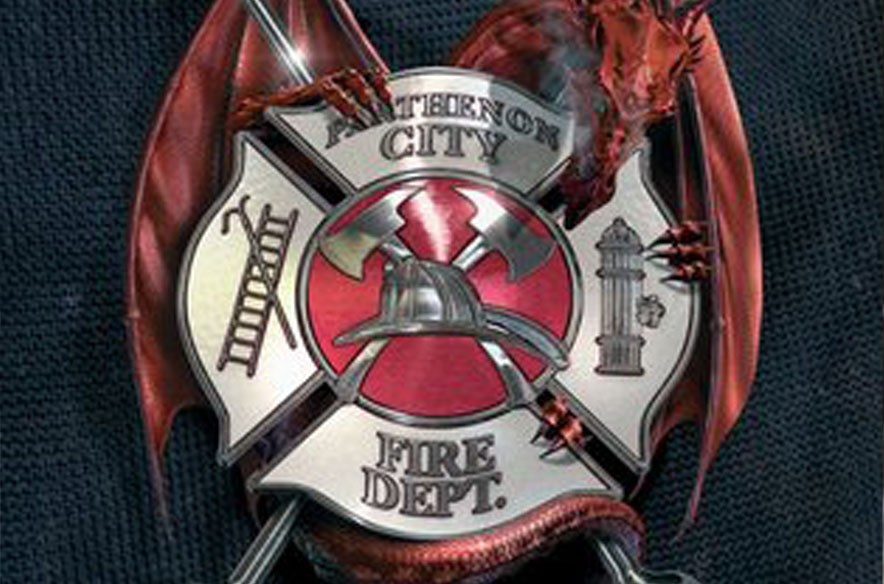 I Am Here to Kill Dragons and Chew Bubble Gum.. And I am All Out of Bubble Gum

When dragons rise from the earth, firefighters are humanity’s last line of defence, in this wild near-future fantasy. 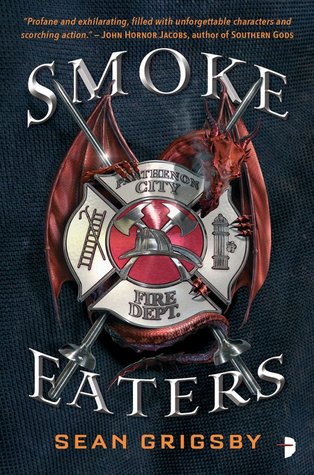 Firefighter Cole Brannigan is on the verge of retirement after 30 years on the job, and a decade fighting dragons. But during his final fire call, he discovers he’s immune to dragon smoke. It’s such a rare power that he’s immediately conscripted into the elite dragon-fighting force known as the Smoke Eaters.  Retirement cancelled, Brannigan is re-assigned as a lowly rookie, chafing under his superiors. So when he discovers a plot to take over the city’s government, he takes matters into his own hands. With hundreds of innocent civilians in the crosshairs, it’s up to Brannigan and his fellow Smoke Eaters to repel the dragon menace.

First off, let me say that this series is kick ass. I ended up reading the books out of order; first, I read Ash Kickers, and I liked it so much I came back to Smoke Eaters. Even though I gave Smoke Eaters a 3 instead of a 5, don’t think that I didn’t love the hell out of it. I did.

Smoke Eaters is the story of Cole Brannigan, intrepid firefighter and captain. A week before retirement, Brannigan gets to a call that changes his destiny and his plans.

Here is some relevant backstory. In the early 2100s, dragons rose from the soil and roared across the Earth. They wreaked havoc, razed cities, destroyed echo systems, and ravaged humanity. The US, government broken, has divided itself into nation states eschewing the restoration of governmental control.

Smoke Eaters, the novel, takes place in Ohio within the world, decimated by dragons. An offset of the fire department is created with individuals who, through a genetic miracle, can breathe dragon smoke and resist heat. Those individuals are called to serve in this elite fighting force called Smoke Eaters. Cole Brannigan, our main protagonist, goes on a call and is confronted with a dragon. The dragon eats some of his team, and Cole is confronted with dragon smoke, which he survives. He is roped into being the new rookie of the Smoke Eaters.

Cole is on one side, a father figure type character, and on the other, a wise sensei. The Smoke Eaters need cohesion, and they need the ethics and morality outside of just killing dragons. People live, and their lives are directly affected by the dragons that need to be taken into account. Grigsby, an Arkansas firefighter, invokes a lot of the imagery and real-world experience he has as a working firefighter. There is an absolute authenticity to the action sequences and firefighting scenes that can only be derived from living it.

My only caveat, and the reason I gave this a 3 instead of 5 stars is that I found the plot to meander a bit, and I got lost. We are here, and Brannigan is a quadriplegic, but only for a little while. But in the meantime, they need to go check out weapons in Canada. Why does Brannigan needs to go to Canada, while injured is beyond me? Then there is a human sacrifice, an evil mayor, robots, and a mega dragon. But, the story pulls it right back together, and everything makes sense again and ends with a grandiose finale that is exciting.

If you want all the fun, pick up this book and the next in the series Ash Kickers. It is a ton of fun. Like, ass-kicking whooping kind of fun. Check it out!

Check out my review of Ash Kickers

Order Your The Series Here 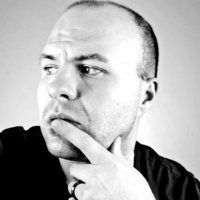 Sean Grigsby is a professional firefighter in central Arkansas, where he writes about lasers, aliens, and guitar battles with the Devil…when he’s not fighting dragons.