House of The Dragon – Season 1 Episode 1

Home » All Reviews » House of The Dragon – Season 1 Episode 1 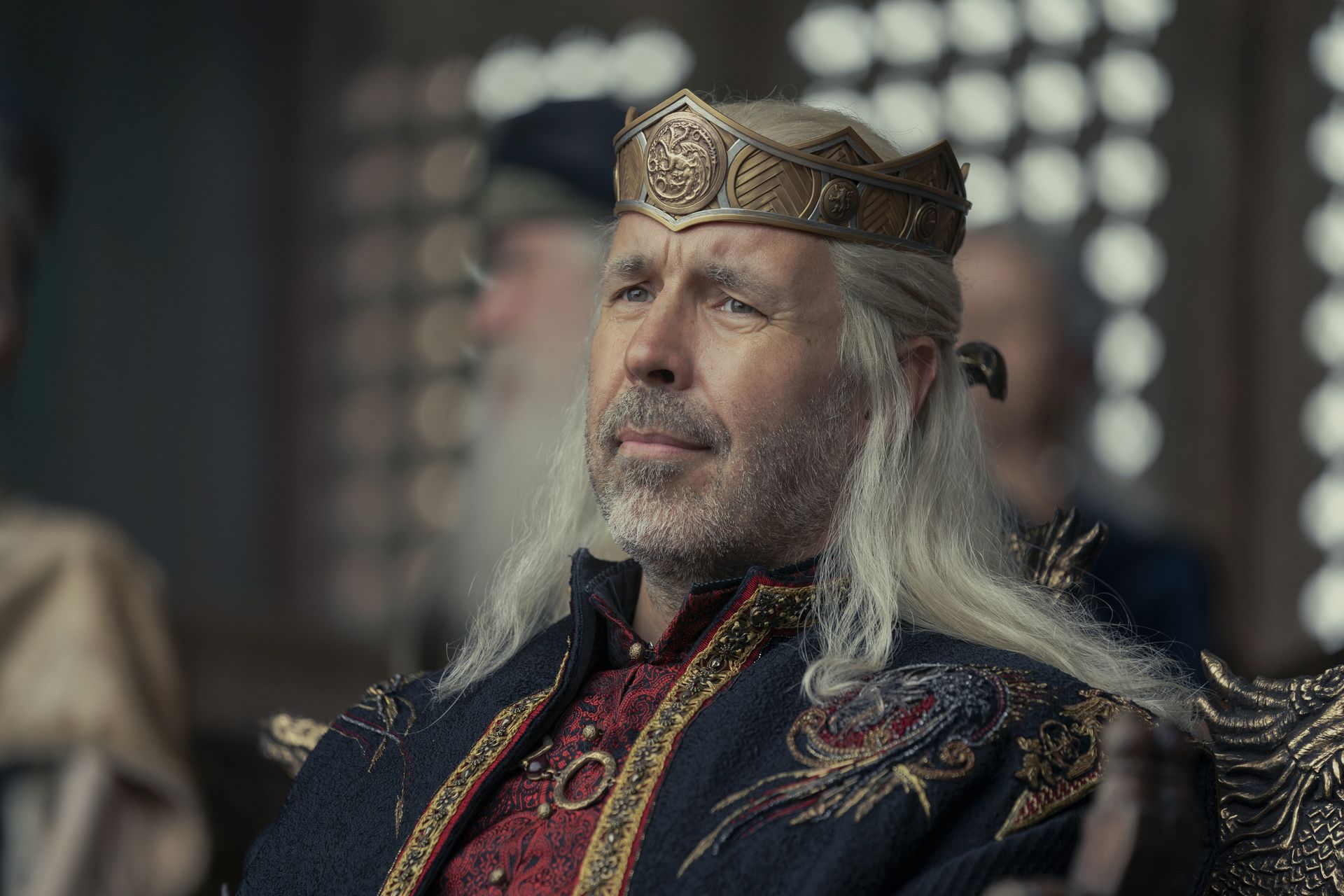 HOUSE OF THE DRAGON is the prequel series to HBO’s fantastic (for the first few seasons or so) GAME OF THRONES. It’s a pretty distant prequel as well, taking place two hundred years before Daenerys Targaryen attempts her epic quest to assume the Iron Throne, which absolutely ended wonderfully and everyone lived happily thereafter. As you can see from my intro, there’s some bitterness and ill-feeling leftover from Season Eight’s finale which many fans share. Can House of the Dragon recapture the magic?

Do we want it to?Yes. With caveats, yes.

Yes, very much so.

The premise is King Viserys Targaryen (Paddy Considine) is having a really crappy two day as he loses both his wife and his heir, a boy, a day later. Viserys is a different kind of monarch in Westeros in that he is neither a religious fanatic, lunatic sadist, or utter incompetent. He’s a bit conflict adverse but that’s hardly the worst quality to have in a setting where conflict is resolved with mass murder. The Targaryens have been rulers in Westeros for a century and they’re at the height of their power due to having a dozen or so dragons.

The issue is succession with Viserys having no sons, one daughter, one brother, and a cousin who was already passed over to make him king. Westeros would very much like to have a man as their king, so that would indicate Daemon (Matt Smith) should be the king but he has the problem of being a relentlessly debonair rogue that everyone is afraid will have them killed when he ascends. Probably because he would. To be fair, they’re all a bunch of scheming bastards and he has a Han Solo meets meets the Tudors ruthlessness. 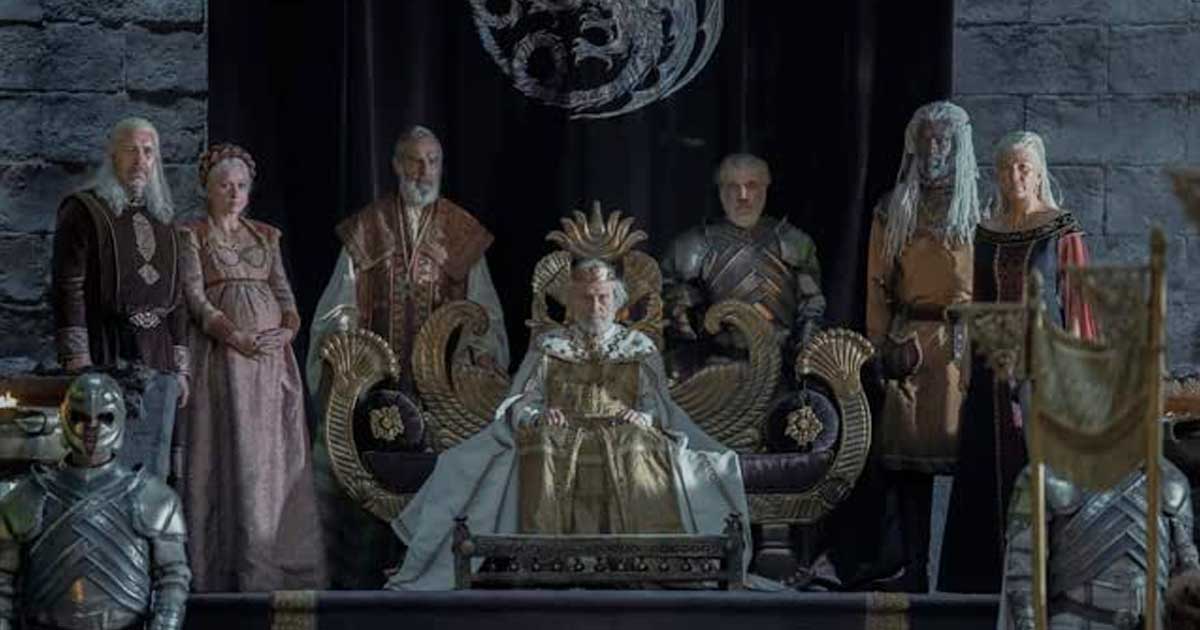 Ser Otto Hightower (Rhys Ifans) wants to skewer Daemon’s chances by unexpectedly supporting Viserys’ daughter, Rhaenyra (Milly Alcock), as the heir instead. This will end up shooting him in the foot as his daughter, Lady Alicent Hightower (Emily Carey), already is in position to comfort the grieving Viserys that is old enough to be her father verging on grandfather. Really, Otto all but tries to pimp her out in his grief over his widowdom and she’s suitably disgusted. It’s also doubly awkward because Rhaenyra and Alicent are besties, bonding over being the smartest people in the Red Keep but kept from power by their sex. Oh and the fact they’re teenagers.
A lot of this is set up for later episodes in the series and if you aren’t interested in a show about who will sit on the Iron Throne, backstab one another, betray their loves, or curiously ignore all the incest going on then why are you watching Game of Thrones? I mean, House of the Dragon? The big thing this series has both for and against it is that it is a return to the pageantry, beauty, crassness crossed with high society, violence, and sex of GOT. It feels a trifle more aware of its female audience this time with Matt Smith there to be balance out the fanservice but it’s very much a show that feels like, “Can we just pretend we never had that messy breakup?” The answer would be no except…dragons.

Damn you, HBO, but you got me with the dragons. It’s like that moment in Peter S. Beagal’s The Last Unicorn where Christopher Lee talks about seeing unicorns for the first time: “Each time I see the unicorns dragons, my unicorns dragons, it is like that morning in the woods and I am truly young, in spite of myself.” I mean, young again in this case refers to 2019 but that feels like a very long time ago with the Pandemic and other things that make me long for Westeros. Watching George R.R. Martin’s work on screen again is like going on a date with your ex after you’ve both grown and remembering the good times while forgetting the bad. But it’s the dragons that got me here and dragons that will keep me to stay.

I could nitpick about details: Rhaenyra is being set up as the plucky young heroine who should be queen because why shouldn’t a girl be queen without ever questioning the fact that a hereditary despotism’s problems are not what sex the ruler is. Matt Smith is doing triple duty as the comic relief, romantic lead, and a handsome rogue with some truly dark qualities. Some Tyrion-esque humor would have been appreciated but the season is young.

There’s some very uncomfortable parts in this episode with the caesarion scene being genuinely traumatizing. The contrast between it and the violence of the tournament is powerful stuff, though, and underscores that this is a patriarchal society that is no woman’s land. It may be a little too heavy on this theme but the central conflict being between Alicent and Rhaenyra is something that I think will provide plenty of fodder for future episodes.

In conclusion, you’ve probably made up your mind on whether or not to see House of the Dragon. However, I give this a stamp of approval. It could end up disappointing me and we break up the same way we did before for the same reasons. However, so far, things are very good and I am way more excited for this than any program this year.