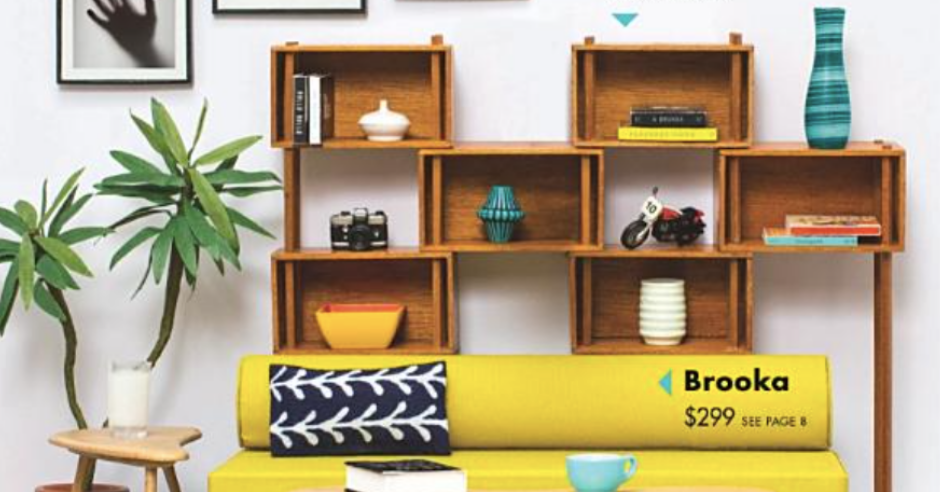 ORSK is As a Beautiful Piece of Fruit With Worms Inside

Let’s make sure it’s really raining before we worry about floods.―

Something strange is happening at the Orsk furniture superstore in Cleveland, Ohio. Every morning, employees arrive to find broken Kjerring bookshelves, shattered Glans water goblets, and smashed Liripip wardrobes. Sales are down, security cameras reveal nothing, and store managers are panicking.

To unravel the mystery, three employees volunteer to work a nine-hour dusk-till-dawn shift. In the dead of the night, they’ll patrol the empty showroom floor, investigate strange sights and sounds, and encounter horrors that defy the imagination.

A traditional haunted house story in a thoroughly contemporary setting, Horrorstör comes packaged in the form of a glossy mail order catalog, complete with product illustrations, a home delivery order form, and a map of Orsk’s labyrinthine showroom.

Grady Hendrix, the author of Horrorstör, is fast becoming one of my favorite authors. The books I have read thus far, We Sold Our Souls, and now Horrorstör are a combination of the ridiculous, the scary, a hell of a lot of fun.

As someone who worked retail in and outside of IKEA, I felt this book on a deeply visceral level. I feel like Hendrix wrote this for my poor bedraggled retail battered soul. And, even though IKEA as a company is better than others, it can get a bit Stepford Wives in upper management. IKEA has inane terms and culture; there is constant upselling and forced smiles and a vast rat-maze-like store trying to funnel you as much as possible.

If you have been told that your presentation is not IKEA, you don’t have that coworker attitude; your feet hurt constantly, you have been called names by customers, yelled at for policies, and must do it all again with a smile, this story is for you. I think I am channeling some inner past trauma here.

“The more Amy struggled, the faster she sank. Every month she shuffled around less and less money to cover the same number of bills. The hamster wheel kept spinning and spinning and spinning. Sometimes she wanted to let go and find out exactly how far she’d fall if she just stopped fighting. She didn’t expect life to be fair, but did it have to be so relentless?”
― Grady Hendrix, Horrorstör

The book is set up as an IKEA catalog, same size, and same general heft. Every few chapters, there is an advertisement for a piece of furniture that is bound to make your life better and more ORSK. ORSK being the fictional lifestyle and furniture company that is a direct knock off of IKEA and the setting for the much of the story. Amy, the main protagonist, is a struggling 20+ associate that is on the fetid hamster wheel of life. The harder she struggles, the further she gets behind.

Amy is about to lose her home due to late rent and is feeling the desperation of not having anywhere to go. Plus, she feels her boss Basil (I have never read a more perfect name for a character) is about to fire her for not being ORSK enough. Amy has put in her transfer, all she has to do is stay away from Basil for the next three days, and she is free of this ORSK store. One problem though, Basil would like to do some special one on one coaching.

This is usually shorthand for firing. But, instead of firing Basil as an offer: stay overnight and patrol the store. See what is going on, stop whoever is shitting on the couches at night, and vandalizing the bathrooms. In exchange, Basil will grant her transfer request and give her 200 dollars cash. She thinks that this might save her, but things get a whole lot more complicated overnight and chockful of horrors instead.

ORSK is as a beautiful piece of fruit with worms inside. We occasionally see a colossal rat scurrying about. Or, there is a general feeling of unease when you walk the beautifully lit and European-esque halls lined with furniture. Could it be that this building this built on the ruins of an insane asylum with a mad doctor who tortured and killed his patients? It sounds like a crazy plot jump, but trust me, Hendrix makes it work.

“I know this is your religion, but for me, it’s just a job.”
― Grady Hendrix, Horrorstör

I loved this book, as I said, Hendrix is becoming one of my favorites. It is a perfect mix of horror, current events, with just the right touch of the insane to keep me turning page after page. Check it out, and next time you are at IKEA, remember this book.

Check Out Some of Our Other REview

I purchased a copy of this for my home library

Want a look at my newest book, The Southern Book Club’s Guide to Slaying Vampires? Then enter now for an ARC giveaway. You could get your blood-soaked paws on one of these books before anyone else on your block!

Grady Hendrix is the author of the novels Horrorstör, about a haunted IKEA, and My Best Friend’s Exorcism, which is like Beaches meets The Exorcist, only it’s set in the Eighties.

He’s also the jerk behind the Stoker award-winning Paperbacks from Hell, a history of the 70’s and 80’s horror paperback boom, which contains more information about Nazi leprechauns, killer babies, and evil cats than you probably need.

And he’s the screenwriter behind Mohawk, which is probably the only horror movie about the War of 1812 and the upcoming Satanic Panic.

You can listen to free, amazing, and did I mention free podcasts of his fiction on Pseudopod.