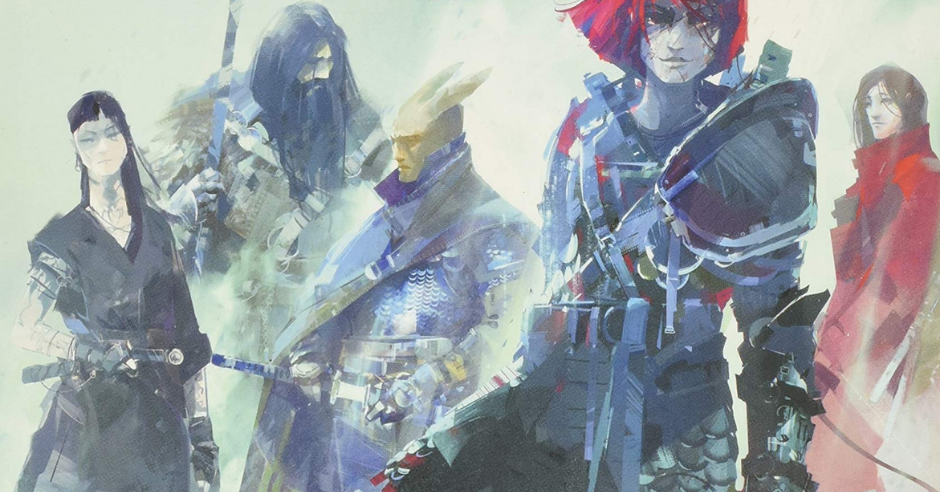 Her smiles were shorter. Her laugh was louder. She became distracted at times, and would stare at nothing with a look of shattered sorrow that passed like a cloud the moment someone spoke her name. She loved less quickly, but more fiercely, and made certain that those she cared for knew it well. Sometimes she wept when it snowed..―

Tam Hashford is tired of working at her local pub, slinging drinks for world-famous mercenaries and listening to the bards sing of adventure and glory in the world beyond her sleepy hometown.

When the biggest mercenary band of all rolls into town, led by the infamous Bloody Rose, Tam jumps at the chance to sign on as their bard. It’s adventure she wants – and adventure she gets as the crew embark on a quest that will end in one of two ways: glory or death.

It’s time to take a walk on the wyld side.

A band of fabled mercenaries tour a wild fantasy landscape, battling monsters in arenas in front of thousands of adoring fans. But, a secret and dangerous gig ushers them to the frozen north, and the band is never one to waste a shot at glory.

Tam Hashford is tired of working at her local pub, slinging drinks for world-famous mercenaries and listening to the bards sing of adventure and glory in the world beyond her sleepy hometown.

When the biggest mercenary band of all, led by the infamous Bloody Rose, rolls into town, Tam jumps at the chance to sign on as their bard. It’s adventure she wants – and adventure she gets as the crew embark on a quest that will end in one of two ways: glory or death. (taken from Amazon)

This adrenaline-filled, heart pounding fantasy is a more than worthy successor to Kings of the Wyld, book one of The Band series. It’s an incredibly layered and touching book that just happens to also be full of battles and tough-as-nails warriors.

The first book follows a group of retired mercenaries called Saga as they take one last mission. Bloody Rose is told from the point of view of Tam, a barmaid-turned-bard, who joins Fable, a mercenary band led by “Bloody” Rose, the daughter of the frontman from Saga. Bloody Rose obviously has daddy issues and is desperate to surpass his reputation. Just how does she plan on doing that? Oh, only be killing the Dragoneater, a vicious, undefeated monster. The last band that attempted to take it on lasted only 17 seconds. Sounds easy, right?

What causes this fantasy to shine is the amazing cast of characters that Nicholas Eames has created. My favorite is either Roderick, the band’s booker, who is hilarious while also being useful in his own right; Brune, a shaman who shape-changes into a bear…when it works. Or maybe it’s Cura; a summoner whose tattoos come to life and kick butt. I found her story arc incredibly touching. I related a little bit, obviously not to the tattoos that can kill, but to the reason she gets them.

This book takes a bit longer to get to the main event than Kings of the Wyld, in my opinion, but it makes perfect sense and it showed more of the incredible world that Eames has created. I love how summoners work in this series, and the shamans were flat-out cool.

Look for old characters from the first book, although they don’t steal the thunder from the amazing new group. I’m not going to say who shows up, but expect some fantastic scenes.