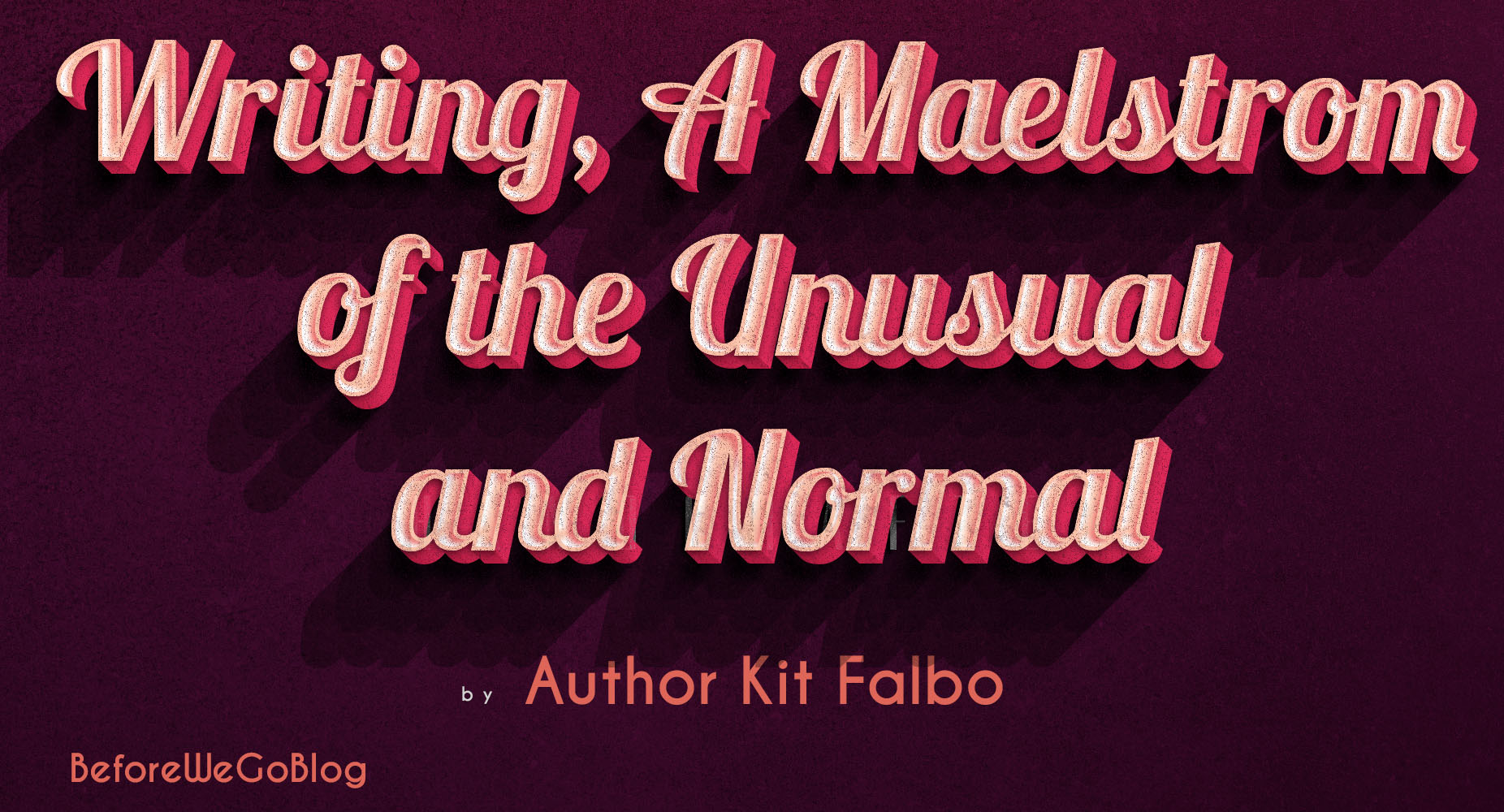 Guest Post – Writing, A Maelstrom of the Unusual and Normal by Author Kit Falbo

Fiction is often the art of blending the mundane and the strange. The mundane of the readers to the strange of the worlds created. There are many reasons for this. Building connections with experiences, bringing contrast to a story, adding that hook for readers to want to see where it is going, to create empathy or horror. Exactly how you choose to twist these together brings out different aspects in the stories we create.

The reader is more likely to feel and emphasize with the mundane. They understand how it feels to be annoyed while waiting in line, how it feels to be one ordinary house in an ordinary city — building that empathy through shared experience — building that place where they can put themselves in the situation. Every genre and subgenre does these things as part of their structure.

In Portal Fantasy, we follow a mundane character entering a new fantastical world. We anchor ourselves to the antagonist and experience the wonder as they do through their eyes and reactions.  In Urban Fantasy, the world is what is mundane, and we can follow fantastical beings living in it often doing ordinary things like laundry while being a werewolf. In Horror, we watch for that sneaking bit of unusual and extreme that makes us want to check under the bed or measure the hall to make sure it didn’t get a half-inch longer in the night.

Not only is normal used to bring us into the story. It is also used to bring contrast to the story. A line that separates the reality from the fantasy, but also a measuring stick of used to compare the worlds we are touching upon.  We can see this with one of the most recognizable first lines in the world, “Mr. and Mrs. Dursley of number four, Privet Drive, were proud to say that they were perfectly normal, thank you very much.” It even uses that word, “Normal.” It leaves us with that hook, knowing that we are to expect something that is not normal to happen very soon. It anchors us, brings contrast, tells us what to expect. It is precisely what you would expect from a master storyteller.

It isn’t just places and objects that you can use to and familiar-relatable aspects to stories. Feelings need to be looked at too, hate, love, regret, fear. Everyone can understand the sense of abject terror at public speaking. Starting with that, everyone can empathize with your main character even if he is a two-foot tall, three-limbed, blue cephalopod speaking using specialized hormones to a brood cluster.  All of these things are an advantage to writers.

The familiar, the mundane, the normal, these are all tools we use in writing to let us connect our story to the readers and contrast situations, blending them into the perfect story soup. No matter how fantastical the elements that are building you always want to have those little relatable moments. In my latest book I start with balloons and a birthday party then take off from there for a wild ride.

Now not every book or story will take this sprinkling of normal. Often you want to be rooted firmly in the familiar so you can subtly detach the reader with little slips of odd and extreme. Horror, thriller, mystery is usually where this domain lays.  Clues that make your spine itch. Scenes of pure horror to be stumbled upon. Little things as reality detaches. Rarely do you want to spring sudden jarring moments on readers. Clues, hints, weirdness dripped in an ink drop at a time. Strange foreshadows strange.

Writers that plot everything out should heed the call of both as they write. Every arc of the story should bring your reader back into the fold of familiarity and caring for your characters if that is what you need. Or leave them lingering with a touch of strange and what is to come.  It is a balance that all writers need to find in their stories. Writers that fly by the seat of their pants should remember that these moments need to happen to create the environments that draw readers in. It is is in the maelstrom of strange and familiar where fiction works.

Kit Falbo spends most of his time being a father and husband and squeezes in time to read and write Science Fiction and Fantasy books.
He graduated from the University of Oregon with a degree in psychology and now lives in the pacific north west.

goodreadsAmazonTwitterPatreon (with my 2 awesome patrons)