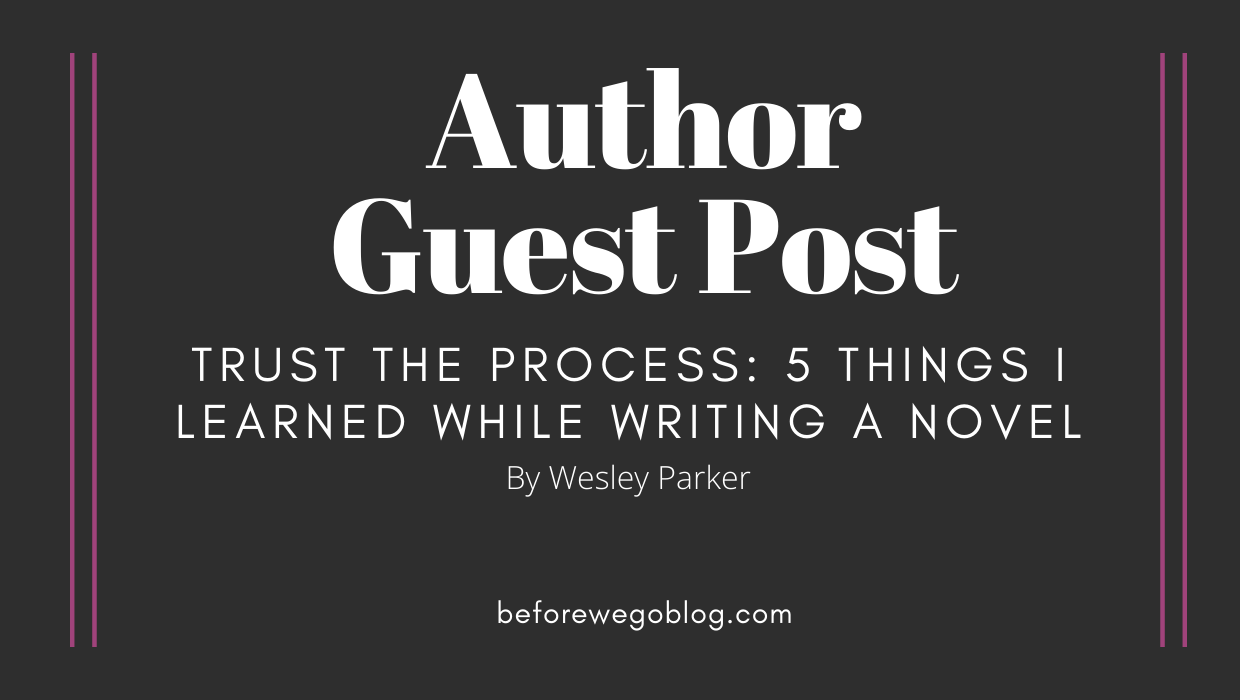 Guest Post by Author Wesley Parker – Trust The Process: 5 Things I Learned While Writing a Novel

Trust the Process: 5 Things I learned While Writing A Novel

“While I can’t promise you’ll have success, I can promise that you’re gonna be fine.”

I’ve always been intrigued by the complicated relationships in life.  I have children that test the limits of my patience, a wife I’m surprised agreed to spend the rest of her life with me, and multiple mothers that all swear I don’t call enough.  But with all that, undoubtedly the most complicated relationship in my life is one I literally created out of thin air.

It’s the day I decided to write a novel.

In the 4 years since I walked into my advisor’s office to choose Creative Writing as a minor, I have watched a hobby develop into a full-on obsession.  I’ve read countless books about the craft, networked with authors, both published and unpublished, and experienced the dreaded monster known as writers block.  There have been months where I didn’t touch my computer, followed by bursts of creativity. I’ve deleted whole sections and swore off writing, followed by the moment when a certain plot point clicks and I ignore my responsibilities to get the thought down.

So I decided to throw out some of the things I’ve learned along the way for others who’ve taken the plunge.  Let’s dive in.

1 – Let Your Characters Live Their Life

Last year, my oldest child started Kindergarten, and for the first month I was an absolute wreck.  I’d pull up, he’d jump out the car, then I’d be crying before I left the parking lot. It felt like I was saying goodbye to him, even though I’d be picking him up the same day.  One day while writing I made the connection between my son and the characters in my novel.From the time your child is born, you’re responsible for everything. You feed them, wipe them, play with them, and when the situation calls for it, you discipline them.  Every aspect of their life is controlled by you.

Your characters are no different.

When you create them, you’re responsible for every fiber of their being.  What beer they drink, who they make love to, all of it is up to you. At a certain point you have to understand that like your children, they have their own life to live.  You’ll still be a part of it, guiding them if they go off the rails, but they need their space. For example, think of how many times you shoehorn a character into a behavior to service the plot point you want.    I have found that by letting my characters tell me how to proceed, the writing is more enjoyable than it would’ve been. Let them live, they’ll love you for it, and so will your readers.

“Let them live, they’ll love you for it, and so will your readers.”

2 – Your Train is Running Right on Time

We live in a society that lacks patience.  This naturally manifests itself when writing.  I’ve had friends publish books and get well into the next one, while I struggled to finish the first draft.  You see the blurbs, their killer reviews on GoodReads, and the Instagram posts with the character quotes, and the people fawning in the comments.  It’s human nature to wonder if maybe writing isn’t the hobby you should pursue.

While I can’t promise you’ll have success, I can promise that you’re gonna be fine.

Writing a novel is one of the most personal projects you can take on.  It’s like building a house from the ground up. You wouldn’t cut corners on the foundation, and you shouldn’t cut corners on the foundation of your writing career.  You only get one chance to make a first impression. I was talking with an author friend of mine, and I was stunned to learn that it took him 7 years to write his first book.  It put my 3 years into perspective. Our train is running right on time, and the accolades we hope for ourselves will be at the destination, provided we boarded the right train.  That train is patience. Which ends to my next point.

One day I opened my laptop to the same chapter I’d been working on for months.  I stared at the sentence, day after day, paralyzed with fear that my dream was gonna die in the middle sentence of dialogue.  But I realized there was a chapter sitting in my head, clear as day and practically finished. Thing is, it was meant for the end of the book and I was about a quarter way through.  But I wrote it anyway, and its been the best decision I made. That chapter became my North Star, giving me a guide to follow with the rest of the story. But it also taught me that writing is guided by emotions.  In the same way that musicians can produce their best work when they go outside the box and follow their heart, writing works the same way. By writing what I truly felt, I was able to write a chapter exactly as I pictured it.

“You’ll join social media, hoping to build a profile and interact with potential customers, then fall into the pit of despair as the other writers you meet publish with great success.  But I encourage you to learn to enjoy these moments, because it’s all part of the journey. Writing should be fun, and like most hobbies, it has the parts that aren’t so fun.”

4 – Take a Chance…and Trust Your Editor

I’m naturally a perfectionist.  I prefer to get things right the first time, in theory saving time later because I got it right the first time around.  In writing, this doesn’t work. In fact, I found that it stifled my creativity because I couldn’t get out of my own head.  You will have editors and beta readers that will tell you if something isn’t working. In the mean time, use that precious first draft to experiment.  Maybe its a dream sequence, or a flashback chapter, the first draft isn’t about precision. If you’ve ever built a Lego set with a child, you start by dumping the contents on the floor.  That’s what a first draft is, its a dump of all potential ideas, raw and unfiltered. Your editor is the instructional guide, telling you what goes where. My friend that edits my work is brutally honest, and seeing how many changes I have made because of her advice, and how much better the story is, its led to a wonderful relationship.  This leads to my final thought on this process.

5 – Enjoy the Process…All of It

Seems pretty simple right?  But this might be the hardest lesson I’ve learned in writing a book.  There have been months when I didn’t touch my computer, swearing I’d never write again.  That would usually be followed by a burst of creativity where I was knocking out chapters in hours.  Writing a book will test you mentally, and honestly, I cant think of anything that compares to it. You’ll join social media, hoping to build a profile and interact with potential customers, then fall into the pit of despair as the other writers you meet publish with great success.  But I encourage you to learn to enjoy these moments, because its all part of the journey. Writing should be fun, and like most hobbies, it has the parts that aren’t so fun. I have met so many wonderful people on this journey. Most of them are just regular working folks, but we all share this dream of being published authors.  We celebrate each other’s successes, and talk each other off the ledge when the road to publication makes us weary. But I can honestly tell you, I wouldn’t change a single part of my journey to get this book done. And neither will you.

About the Author – Wesley Parker

I’m a father of 3 living the dream on the East Coast.  My novel, Coffee and Condolences is going to be released this summer.  I enjoy talking about writing and listening to 80s music.