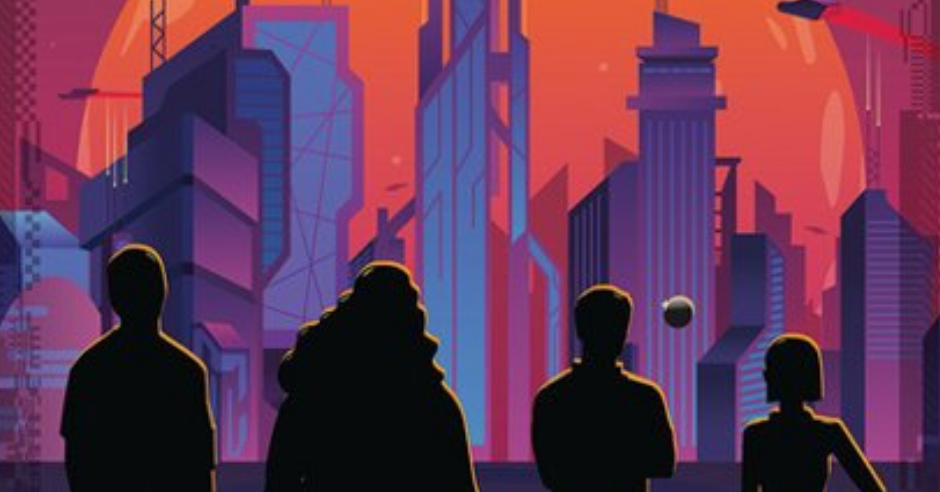 By Beth TablerAugust 12, 2021No Comments

a love letter to superheroes.

On his fiteenth birthday, Malcolm Gravenhurst is preparing to take on the mantle of Guardian, like many Gravenhursts before him. The Guardians are tasked with defending the city of Porthaven, and his family is the only one to possess the superpowers necessary to battle the frequent alien invasions of robotic klek. But power has brought the Gravenhursts more than just responsibility–it has also brought them fame and wealth. When Malcolm meets some teens living and working in secret, he learns that underneath their heroic facade, the Gravenhurst family is hiding some very dark secrets. With the threat of annihilation on the horizon, soon Malcolm must choose between family loyalty and doing the right thing.

Disclaimer: I am friends with Shane Arbuthnott. He plays The Best Alien in my weekly RPG campaign.

Guardians of Porthaven by Shane Arbuthnott is a middle-grade/Young Adult superhero story. It follows Malcolm Gravenhurst, the youngest member of a family who all have superpowers. They call themselves Guardians and disdain the term superhero, viewing that as ‘childish entertainment.’

By Malcolm’s understanding, his family are the only ones who gained these powers. An alien gateway crash-landed in Porthaven decades ago, releasing numerous robotic invaders called the klek. The Gravenhurst family, with their new powers, managed to defeat the klek, and become heroes to the town, complete with fawning media and tower. The klek keep coming, appearing at random through the city every few weeks, but they never seem specifically dangerous unless they’re attacked first (even if by accident.) And the town continues to love the Gravenhursts.

Porthaven itself seems like a science fictional city, but none of the inventions that work there can work outside the city. This is a neat bit of worldbuilding that hits the slightly futuristic vibe in many mainstream superhero comics without changing the entire world. These comic books come up a few times, as Malcolm clearly loves them and has taken inspiration from them, but it’s never overwhelming or a replacement for the rest of his personality.

They were his own collection–Squirrel Girl, Ms. Marvel, the classic Claremont and Davis run of Excalibur that he’d worked hard to collect. Ones about heroes who didn’t just do it as a job and tried to do every ounce of good they could in the world.

Malcolm is socially awkward, as he’s never been around many people besides his family and their employees before. He was tutored rather than going to school, and has no friends to speak of. He talks too much and misses social cues. He has to take classes on managing public relations. He is consistently called out as a child of privilege, and that’s true, but it’s also clear that that same upbringing had a lot of its own difficulties, mostly due to his isolation and how his family would stamp down on him for his suggestions.

“Well, um, I’m responsible for keeping the city safe, and that’s where I’d like to focus. I’ve only ever fought the klek in simulations before now, right? So I’ll have to get used to the real thing, I guess. And I have this idea about—”

When Malcolm first experiences life outside the tower, he meets another youth who also has superpowers. That simple fact alone rattles him. He’s been told all his life that only members of the Gravenhurst family get these powers. Then he meets a couple others, and they’re doing what he wanted to do—using their powers not just against the klek, but to keep the city safe from regular crime as well.

Malcolm’s power is defensive. He can form a powerful set of armor around himself, almost like a force field, to keep himself safe. This lets him take damage and defend others, which is extremely fitting given his role.

Now that he knows what he’s looking for, Malcolm starts seeing plenty of small cracks in his family’s stories. The conflict is organic, clever, and driven by the personalities of the main characters. The pacing is like clockwork, and just when you think a major plot is wrapping up, another twist comes in. The action and mystery complement each other perfectly. A lot of books provide a more thorough status quo before everything gets taken apart, but Guardians of Porthaven hits the ground running.

The ending is excellent as well. If it had had a more traditional ending, it would have been reinforcing Malcolm’s privilege. Instead, it finds its own path and is far stronger for it.

Overall, Guardians of Porthaven is a great, fast-paced book, an examination of privilege, and a love letter to superheroes.

Books Are Awesome-Article by Ryan Howse