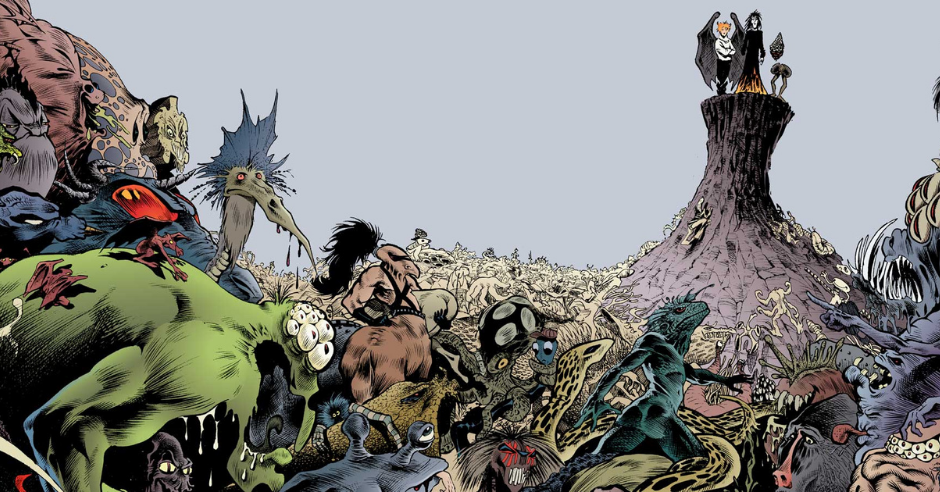 “You get what anybody gets – you get a lifetime.”

From the publisher, “New York Times best-selling author Neil Gaiman’s transcendent series SANDMAN is often hailed as the definitive Vertigo title and one of the finest achievements in graphic storytelling. Gaiman created an unforgettable tale of the forces that exist beyond life and death by weaving ancient mythology, folklore and fairy tales with his own distinct narrative vision.

In PRELUDES & NOCTURNES, an occultist attempting to capture Death to bargain for eternal life traps her younger brother Dream instead. After his 70 year imprisonment and eventual escape, Dream, also known as Morpheus, goes on a quest for his lost objects of power. On his arduous journey Morpheus encounters Lucifer, John Constantine, and an all-powerful madman.

This book also includes the story “The Sound of Her Wings,” which introduces us to the pragmatic and perky goth girl Death.

Includes issues 1-8 of the original series.”

I am at a bit of a loss as far as reviewing goes. What can I add that hasn’t been said a thousand times over?

Let me tell you a little bit about how Sandman has affected me as a reader.

As far as the graphic novel genre goes, I came to it a bit late in life. I didn’t “discover” comics until my early thirties. I have however read many, many books. As a child, I was a voracious reader. A habit that continued into adulthood and played no small part in shaping who I became as a person. You can learn much from fiction, as much or more than you can from non-fiction. But, like many readers out there I deemed comics childlike and inappropriate for the discerning reader.

I was a snob. I was wrong. Comics are a combination of two of my favorite things: art and words. They can be as childlike or adult as the author sees fit. Sandman is an adult comic with adult themes steeped in dark fantasy. Gaimon took legends and mythos from various religious and mythological backgrounds and cobbled them together into a cohesive plot. It is definitely dark, adult, and a perfect book to jump into the genre.

Preludes and Nocturnes follow Dream also known as Morpheus, who is the younger brother of Death. As an Endless, one who lives forever,  he becomes trapped for seventy years in an evil magician’s basement. The evil magician thought he was trapping Death to live forever, but what he conquered instead was “little death.” Dream escapes captivity after 70 years and searches out his lost tools; The helm, the sand, and the ruby. He is much weakened from his years trapped, but once he regains his strength he begins his quest to require what was stolen from him and in the process rebuild his crumbling realm.

Preludes and Nocturnes is an opening book to many stories to come. This story reads fairly straightforwardly. However every page is setting up the future books; Dream loses power, dream gains power, and Dream seeks revenge. As straightforward as that seems there are overarching themes about family and what death and sleep actually are. Death is very secure with herself, while Dream lacks that security. Often he questions himself and his actions. There is a beautiful sequence later in the volume where Death and Dream are talking. Death mentions how everyone fears her while the same people go into Dream’s realm with no complaint. His response, “And I am far more terrible than you, sister.” Highlighting that Dream holds incredible and terrible power while Death is a release from pain and could even be seen as a kindness.  The irony is not lost on either of them. Dream’s relationship with family and specifically his older sister Death play a large part in how Dream views the world and how future stories play out. Death’s opinion of Dream’s actions and who he is are one of the few opinions that he cares about.

There is much more to this story. It is stacked with beautiful but subtle nuances. However, it is up to the reader to find those subtleties for themselves. I don’t think that this series is for everyone, but it is a great place to start reading and appreciating graphic novels. But if this story sings for you, it will be one of the most beautiful things you have ever read.

Stick a toe in, and see how the water is.

Read The Sandman Preludes and Nocturnes