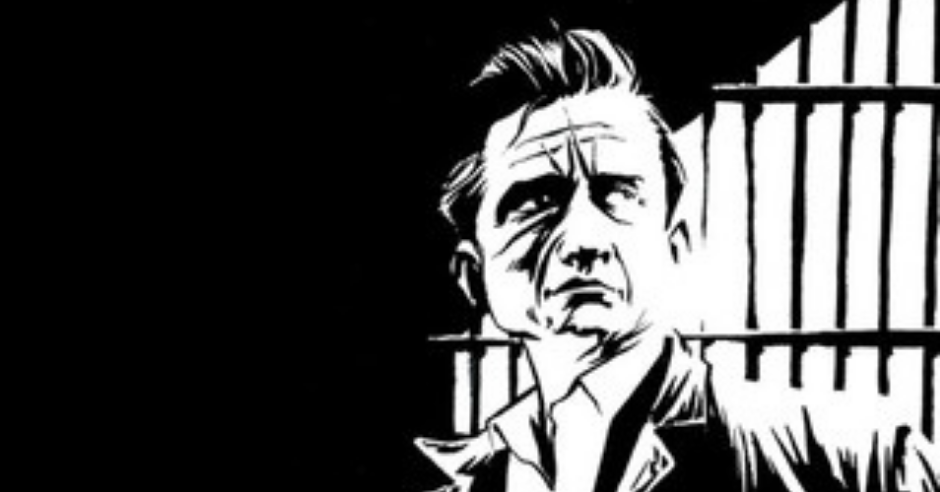 “Never. Don’t believe everythin’ you read in the papers. But I tell you this Johnny Cash knows what it’s like to be behind bars. The man is a story-teller. He lives his songs.”

From the publisher, “The first and only illustrated biography of “The Man in Black,” Johnny Cash, the most famous country singer of all time Cash was a 17-time Grammy winner who sold more than 90 million albums in his lifetime and became an icon of American music in the 20th century. Graphic novelist Reinhard Kleist depicts Johnny Cash’s eventful life from his early sessions with Elvis Presley (1956), through the concert in Folsom Prison (1968), his spectacular comeback in the 1990s, and the final years before his death on September 12, 2003.
Already a bestseller and award-winner in Europe, Johnny Cash: I See a Darkness vividly portrays the unpredictable life of a loner, patriot, outlaw, and music rebel, making this unique biography a compelling read for multiple generations of graphic novel and music fans.”

We open on a familiar scene. A man in black is facing mysteriously off into the distance. A guitar is leaning against his legs. A car driving furiously towards a sign reading, “Reno. Home of Gambling.” Already the reader is enticed by a shot of who we know as Johnny Cash fighting and shooting a man in Reno, being arrested, and heading off to a foreboding prison. Anyone familiar with Johnny Cash’s music knows what this introduction is referring to.

If you aren’t familiar with this bit of music history, it matters not. Kleist is building a mental image for you. Johnny Cash, the man, the brooder, the singer. While the movie “I Walk The Line (2005) concentrated on Johnny Cash and June Carter Cash’s romance, “I See Darkness” concentrates on a darker, more brooding, and drug filled Cash. All this happens before his days when he became clean and sober and a devout Christian. Whether this is an accurate portrayal of Johnny Cash during this part of his life is up to interpretation. Cash passed away in 2003 taking much of his mysterious life with him. Even though this is billed as an illustrated biography, Kleist is telling a story and building an image of the almost fictional music legend through selected pieces of Cash’s life. Occasionally to preserve the dramatic tone of the story, facts get skewed.

“Sometimes I am two people. Johnny is the nice one. Cash causes all the trouble. They fight.”

The story is told chronologically from Cash’s beginning up until his first kiss with June Carter Cash. Much of it is centered around Cash’s iconic performance at Folsom State Prison in 1968. There he met the narrator of his story, Glen Shirley. Later Sherley was made famous by Cash during Cash’s performance of Sherley’s song, “Greystone Chapel” at Folsom Prison. Throughout the novel, Music is used as a means to network and increase Cash’s social clout elevating himself from a poor cotton farmer to a famous musician known the world over. Also, it allowed Cash a vehicle and an audience of fans that Cash can exercise his proverbial demons on.

The imagery is cinematic in scope. Often the story depicts scenes that look as if they have been shot by a movie cinematographer. One of the earliest settings in the story is the Cash family attempting to drive to their new home in the south. The car is set akimbo to the road while rain that falls from the heavens splashes the ground like gunshots and in the foreground is a lonely gravestone marked with the letter 25. That level of emotional storytelling of  Cash’s life is wrung from every word and panel. We the readers are living these moments as much as John is. We are plowing through the rain leaky busted family car. Praying that we will make it to the new farm ok. Or we become enraged inside watching our beloved older brother Jack speak his last words, “A beautiful river… is flowing both ways.

No, I ain’t going that way…Ya, that’s the way I wanna go. Ma, can you see it?” Or later in the story when Johhny is attempting to become clean from all his drug use and his figure is torn and ripped apart by scraggly lightning bolts arcing from his boy. As a reader, I can feel that I can see that, I feel as if I know at that moment a little about how much that ripped John apart to do.
“In his review at Comics Bulletin, Jason Sacks describes another scene which demonstrates Kleist’s skill with a brush. “At the nadir of his drug addiction, (Cash) wanders blithely into a cave with just a flashlight that’s low on batteries. Using blacks almost as a second character in the scene, Kleist literally shows the blackness that has come to envelop Cash’s soul at that moment in time. When Cash literally and figuratively emerges into the light, that light seems to shine straight from Heaven — a deeply healing light that reflects Cash’s emergence to finding some measure of peace. (The Comics Journal)”

In walking out of the cave and into the light, Cash literally walks into the arms of his Momma and the love of his Life June Carter. Exemplifying Cash’s next stage of his life. Drug-free.

Finally, the story ends as it begins, with an adaption of one of Cash’s songs with him as the star. Ghost Riders of the Sky. A song about a lone cowboy facing down his demons. Much as Cash has been a lone cowboy faces his demons much of his life.

“An old cowboy went riding out one dark and windy day
Upon a ridge, he rested as he went along his way
When all at once a mighty herd of red-eyed cows he saw
A-plowing through the ragged sky and up the cloudy draw
Their brands were still on fire, and their hooves were made of steel
Their horns were black and shiny and their hot breath he could feel
A bolt of fear went through him as they thundered through the sky
For he saw the riders coming hard and he heard their mournful cry
Yippie yi ooh
Yippie yi yay
Ghost riders in the sky”

Kleist boils down Johnny’s story to the drama of being the man in black. It isn’t entirely biographical in nature as we do not get to know him as anything other than his persona. However, it is a very gratifying read, especially for the fan. If you are interested in getting a better picture of Johnny Cash, I recommend reading “Cash” by Johnny Cash.

Novel Review – The Prince and the Dressmaker by Jen Wang

Review – The Wolf of Oren-Yaro by K.S. Villoso