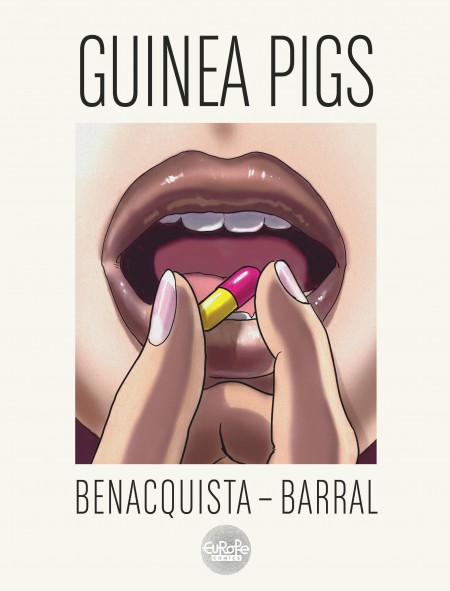 From the publisher, “A pharmaceutical testing center. Three human test subjects. Three pills a day for twenty-one days. And at the end, a check for 3,500 euros. Our three guinea pigs begin the test thinking they’re in it for the money. Three weeks later, they leave transformed. Have their dreams come true, or will their lives become living nightmares?”

The premise of this story is one of those simple but not easy things. A pharmaceutical company has created a revolutionary drug they want to test in drug trials, subsequently, choosing three people as their guinea pigs. This drug takes individuals and frees them from their deepest inhibitions. If you are shy, you would become bold. If you are cowardly you would become courageous. The story is what happens to these three individuals and how they change morally from the effects of the drug. No, this is not some run-of-the-mill superhero story. They don’t receive powers from their magic pills. Imagine mixing the movie, “Limitless” with a moral tale. That’s these three.  The story progresses to testing, subsequent side effects, and societal changes. How does the world change around them once they have changed? Madness doesn’t ensue. Instead, the individuals get everything they wanted, good or bad. One of the drawbacks for me as a reader is I didn’t care about the characters. I wanted to, but it did not feel as if there was a true protagonist to the story to care about. Yes, the characters change. Yes, they do get their most “deep-seated” desires. But, although they change psychologically it does not necessarily equal to them being a protagonist. The only character I felt connected to in this was Daniel Martinez. Even then, in the story I do not understand his progression from family man, to living at home with his mother, to spy? It is all a bit hazy.

One thing this story absolutely excelled at was flow. The pages read like a movie or TV show and moved from scene to scene effortlessly.  At the beginning of the story, before it got a bit hazy, I could see this being a TV series or movie. It read that well.

Graphically, it is drawn very well. Kudos to Barral Nicolas. He nailed the characters and the settings. Instead of being a detractor, his use of a minimum colored palette helped define scenes and details. The coloring and illustration are solid completely throughout the story.

In conclusion, I know this is a rather short write up and I wish I had more to say about this but I think the story lacked the meat for a weighty analysis. In the end, I liked it. It was a quick and good read. Is it the best thing I have ever read? No, but it is a worthy endeavor for an hours worth of reading. Check it out.

Check Out Some of Our Other reviews

Review: The Book of Form and Emptiness by Ruth Ozeki

Review – The Girl and the Moon by Mark Lawrence