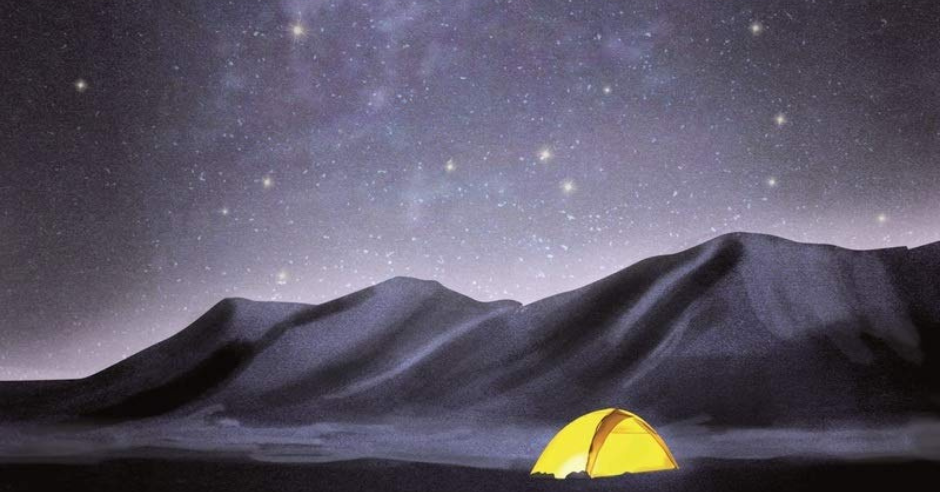 It is Dark and Desolate in Good Morning, Midnight by Lily Brooks-Dalton

By Beth TablerApril 4, 2021No Comments

“Only the cosmos inspired great feeling in him. Perhaps what he felt was love, but he’d never consciously named it.

His was an all-consuming one-directional romance with the emptiness and the fullness of the entire universe. There was no room to spare, no time to waste on a lesser lover. He preferred it that way. The”―

Augustine, a brilliant, aging astronomer, is consumed by the stars. For years he has lived in remote outposts, studying the sky for evidence of how the universe began. At his latest posting, in a research center in the Arctic, news of a catastrophic event arrives. The scientists are forced to evacuate, but Augustine stubbornly refuses to abandon his work. Shortly after the others have gone, Augustine discovers a mysterious child, Iris, and realizes the airwaves have gone silent. They are alone.

At the same time, Mission Specialist Sullivan is aboard the Aether on its return flight from Jupiter. The astronauts are the first human beings to delve this deep into space, and Sully has made peace with the sacrifices required of her: a daughter left behind, a marriage ended. So far the journey has been a success, but when Mission Control falls inexplicably silent, Sully and her crew mates are forced to wonder if they will ever get home.

As Augustine and Sully each face an uncertain future against forbidding yet beautiful landscapes, their stories gradually intertwine in a profound and unexpected conclusion. In crystalline prose, Good Morning, Midnight poses the most important questions: What endures at the end of the world? How do we make sense of our lives?

Good Morning, Midnight by Lily Brooks-Dalton is a melancholy story with uplifting moments that did not entirely connect with me as a reader. I picked it up initially because I liked the cover and the blurb on the back. I saw a trailer for the movie adaptation of the novella starring George Clooney but did not connect the trailer I saw and Lily Brooks-Dalton’s book. I was going in blind, which is a great place to be. You can internalize a story without it being overshadowed by what you had heard about it.

“. . .as the silence wore on it grew cacophonous.”

Good Morning, Midnight follows two characters. Augustine is an aging Astronomer on a work trip in the Arctic. He now resides in isolation, as all his team and coworkers fled some unknown cataclysm. Augustine decides to remain behind. Not for the betterment of the situation for anyone; he is older and likes it up there. Sully is returning to Earth with a crew from a protracted visit to Jupiter. All they are met with is silence as they return. And, no idea what they are returning to.

The narrative follows a dual structure and switches each chapter jumping from Augustine and Sully’s perspectives. We get little tastes of each of the characters, wondering the whole time whether these characters were going to meet somehow. It is the will they or won’t they. Or does it even matter if they do.

“Only the cosmos inspired great feeling in him. Perhaps what he felt was love, but he’d never consciously named it. His was an all-consuming one-directional romance with the emptiness and the fullness of the entire universe. There was no room to spare, no time to waste on a lesser lover. He preferred it that way.”

Style aside, this is a thought-provoking novel. It is novella lengthed, so Brooks-Dalton entirely focuses on the relationships that the lead characters, Augustine in the Artic and the Astronaut Sully, use intense and descriptive imagery arctic and space.

Both of the main characters have different experiences; the arctic and space are different areas. But, also very shared experiences of loneliness, isolation, pain, depression, and regret from their past lives led. Both Sully and Augustine are selfish characters in their lives before event X happened to the Earth. I am labeling it as X as we readers have no clue anything that has occurred beyond Augustine’s coworkers evacuating the Arctic station very quickly. All the astronauts know is that there are no radio signals, and the power is out and is blanketed in uncertainty.

Author’s make purposeful choices when talking about everything in their books. But, I am not sure that Brooks-Dalton decided not to discuss what has happened to the Earth as a means of this being a purely character-driven novel, and on the grand scale of things, it doesn’t matter. Due to the short format, there isn’t a lot of space available to go into it for length worldbuilding. If the choice was the former, I think that was a hard pill for me to swallow as a reader.

Without spoilers, choices at the end of the book necessitate info like that being valuable. To the readers specifically because otherwise, it seems rather hopeless. It is pure indeterminateness and an uncomfortable position for the characters to be sure, but for the readers certainly.

My detachment from the story might be that I am not the perfect reader for the narrative’s somber and subtleness. Brooks-Dalton is a tremendous writer. There is an ephemeral way she describes things, almost as if she is seeing things through a mist and describing them.

This style was complex for me to read; I don’t tend to get hooked on the characters and stories as much as I would have liked. This detachment is not the author’s fault, just stylistic differences. Even though this wasn’t the perfect choice of storytelling for me, this is an excellent book written by a very skilled writer. And, if you like open-ended type storytelling, I am sure you will love it.