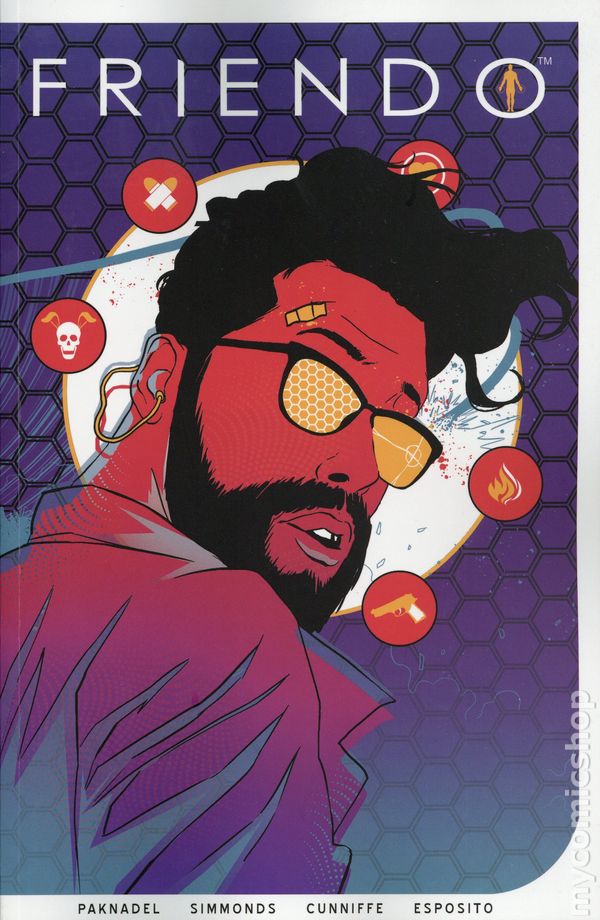 Give Comics a Chance – Start With Vault Comics

Aleph Null is a lot of things: An orphan, a human guinea pig undergoing medical tests for cash, a bodyhacker, a hardcore future junkie, and a corporate asset.

What if dreams broke through into reality? When a dream entity known as a figment emerges from a dreamer’s mind, it’s Daher’s job as an Inspector Judge to track them down and make the call

I want to talk to you a little about my favorite comic publisher and creators, Vault comics. They are taking over the comic industry for reals. I know a lot of you don’t read comics by choice, because they aren’t your cup of tea, or because they seem overwhelming to get into. It is true; they can be that way, especially if you are trying to get into some of the older storylines from Marvel or DC where there are 36 timelines and 6 iterations of each character. Vault isn’t like that. Vault puts out quality storytelling that has a sci-fi or fantasy bend to it. Imagine your favorite three-book series of science fiction or grimdark. The depth of detail and storytelling, the quality of the mental imagery, the incredible dialog. Great. Do you have that image in your head? Hold on to it for a second. Now imagine you are holding a graphic novel or comic book. Put that feeling on that graphic novel or comic book. It is the same level of plot, detail, quality storytelling, and dialog. The only difference is the medium and mode of expression is slightly different.

Vault itself runs the gamut in its titles. Horror, nercomancy, goddess myth, retelling of ancient myths, to the downright fantastical.

Since I have embraced comics and graphic novels in the last five years, the quality of what I have been reading has increased tenfold. Some of the best writing out there is being done in graphic novels, but most people don’t give comics a chance because of the stigma attached to them. All I am saying is, give a graphic novel or comic a chance. Try one, and if you are a sci-fi/fantasy fan start with Vault Comics. Their catalog is getting to be insane with the quality they are putting out. They are the next huge things in comics.

Here are a few of Vault’s titles, some of which I have read and reviewed. See what you think. It will only take a single edition to get you hooked.in

Here are a Few of Their Extensive Titles Worth Checking Out

She Said Destroy #1
by Joe Corallo

Over millenniums, Brigid, Goddess of the Sun, has conquered and converted the entire solar system into worshipping her and her alone, save one space colony. The witches of Fey are the last believers of The Morrigan, Goddess of Death, Brigid’s sister and the only other God left. As Brigid’s forces prepare for one final battle, The Morrigan prepares to do what she does best: Destroy

Leo wasn’t allowed toys as a kid, but now that he’s all grown up he’s going to take yours. He used to play by the rules, but then governments and corporations set fire to the rules and still expected him to behave. He probably would have if it hadn’t been for his new friend Jerry. See, Jerry isn’t human; he’s a personalized marketing VR… and he’s malfunctioning. Unhinged ultraviolence from Alex Paknadel (ARCADIA) and Martin Simmonds (PUNKS NOT DEAD).

Former child queen Elida was driven from her throne at age ten and forced to wander the galaxy, evading the revolutionary forces that wanted her dead. When an old frenemy claims to know the whereabouts of Elida’s long-lost mother, she is forced to return to her former kingdom and stage a rescue.

You can find my review here.

On the night of the biggest storm in New York City history, Elysia Puente gets a call from her estranged little brother Angel, terrified, begging for help. When the call cuts out suddenly, despite the bad feelings between them, Ellie rushes into the night. Finding his broken phone in front of a barricaded subway station, Ellie follows echoes of her brother into the sinister darkness of the underground, desperate to find him before it’s too late.

It is a story of love, loss, beauty, and what it means to be human. It is well worth the read.

You can find my review here

Roots, once suffocating under cement, tear through the streets of London to throttle buildings. Vegetable homunculi hold up banks with automatic weapons. There is a green and blooming world beyond our own, fighting back against the human pollutant. We will launch a rescue mission to this Otherworld. But it is cruel and unknowable, and should we become tangled in its vines, more than cities will fall.

Inside the Vault, it’s safe to be different.

Also Check out their great twitter feeds @DamianWassel and @afwassel