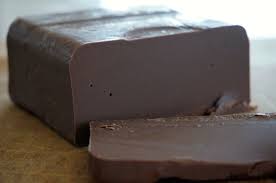 I selected this little recipe of excellent as my first list item to formally attempt, Gianduja,  because it is near and dear to my heart. I lived in the Piedmont region of Italy for three months on an educational trip. I love the cuisine of that area, the fresh fish, and the food festivals. It was one of the greatest summers of my life. Enter idea to finish the 1001 things to eat before you die list. I have been privately and gleefully marking these off for years, but I have decided to make a more constructive leap towards finishing. 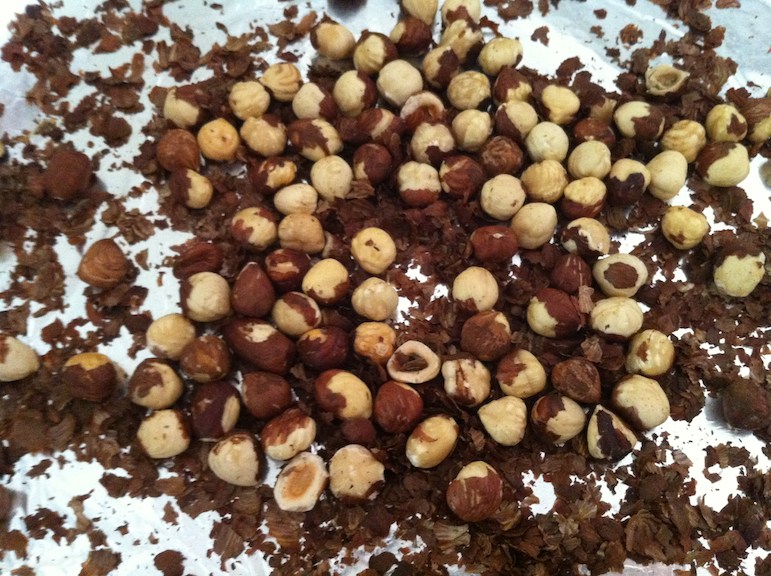 A most unholy pair: chocolate with hazelnuts. 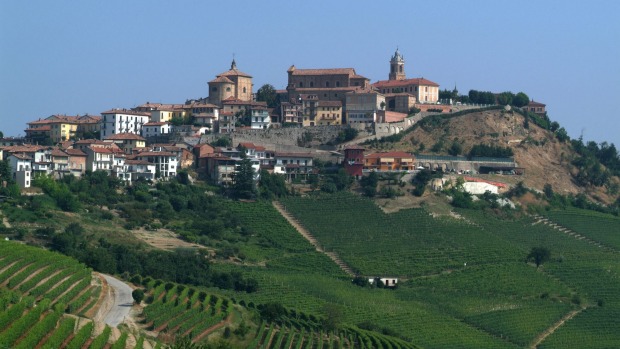 According to Wikipedia, “Gianduja or gianduia (Italian: [dʒanˈduːja];[1] Piemontese: gianduja [dʒanˈdʊja]) is a sweet chocolate spread containing about 30 % hazelnut paste, invented in Turin during Napoléon’s regency (1796–1814). The Continental System – imposed by Napoleon in 1806 – prevented British goods from entering European harbors under French control and put a strain on cocoa supplies.[2] A chocolatier in Turin named Michele Prochet extended the little chocolate he had by mixing it with hazelnuts from the Langhe hills south of Turin.[3] Based on Gianduia, Turin-based chocolate manufacturer Caffarel invented Gianduiotto in 1852.[4] It takes its name from Gianduja, a Carnival and marionette character who represents the archetypal Piedmontese, a native of the Italian region where hazelnut confectionery is common.”

It is crazy to me that I didn’t taste this while I was there. I even went to a slow food event at our castle, they had may local delicacies, but this wasn’t one of them. From my reading, Gianduja is the older, sexier, more sophisticated big brother of what we know as mass marketed Nutella. Having been a Nutella aficionado for many years, I am excited to make the comparison. Also, the recipe seems pretty straightforward. The words “Straightforward” and “great” seem to be synonymous with food during wartime dishes. Which is interesting to me for entirely different recipes. Looks very minimalistic.

1. In a dry skillet over medium heat, toast the hazelnuts for 3 to 4 minutes, or until they are fragrant; cool.

2. In a food processor, grind the hazelnuts and sugar for 6 to 8 minutes, or until they form a smooth paste, scraping down the sides of the bowl several times with a spatula as the mixture thickens.

3. In a medium saucepan, bring the water to a boil. Lower the heat and set a large heatproof bowl on the saucepan to cover it; it should not touch the water. Place the chocolate in the bowl and let it sit, stirring occasionally, until chocolate melts. Remove the bowl from the heat. Wipe the bottom dry.

4. Stir in the butter until it melts completely. Add the cream and salt and mix until incorporated. Stir in the hazelnuts. Transfer to a container and refrigerate until cool. It will firm and turn into a spreadable consistency similar to cream cheese. Keep covered and chilled until serving. Gianduia can be refrigerated for up to 4 weeks. Remove a spoonful from the container and let it soften at room temperature for 1 hour before using.

Recipe courtesy of : The Boston Globe

Holy crap on a cracker Batman, this is good! I want to unhinge my jaw and swallow the entire bowl. But I won’t because I am a lady. 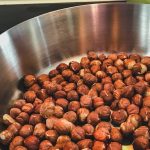 Roasting of the hazlenuts. 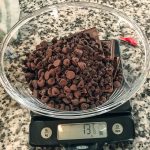 All the chocolate I could find in my pantry. 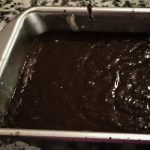 It literally shames Nutella and tells it to take its ball and go home. My only caveat is that you absolutely need a blender capable of making nut butter. I have no such mixer, so mine was a little grainy from the hazelnuts. Who cares! Grainy is the new black, or whatever.  It is amazingly good. Make it, bring it to your friends’ houses, so they like you more. Give it to your boss, so she gives you a raise. Wow.