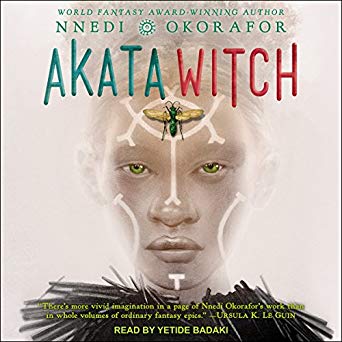 Akata Witch transports the reader to a magical place where nothing is quite as it seems. Born in New York, but living in Aba, Nigeria, twelve-year old Sunny is understandably a little lost. She is albino and thus, incredibly sensitive to the sun. All Sunny wants to do is be able to play football and get through another day of school without being bullied. But once she befriends Orlu and Chichi, Sunny is plunged in to the world of the Leopard People, where your worst defect becomes your greatest asset. Together, Sunny, Orlu, Chichi and Sasha form the youngest ever Oha Coven. Their mission is to track down Black Hat Otokoto, the man responsible for kidnapping and maiming children. Will Sunny be able to overcome the killer with powers stronger than her own, or will the future she saw in the flames become reality?

I’ve always been fascinated by candles. Looking into the flame calms me down. Here in Nigeria, PHC is always taking the lights, so I keep candles in my room just in case.

PHC stands for “Power Holding Company of Nigeria,” but people like to say it really stands for “Please Hold Candles in Nigeria.” Back in Chicago we had National Grid, and the electricity was always working. Not here, though. Not yet. Maybe in the future.

One night, after the power went out, I lit a candle as usual. Then, also as usual, I got down on the floor and just gazed at its flame.

My candle was white and thick, like the ones in church.

I lay on my belly and just stared and stared into it. So orange, like the abdomen of a firefly. It was nice and soothing until . . . it started flickering.

Then, I thought I saw something. Something serious and big and scary. I moved closer.

The candle just flickered like any other flame. I moved even closer, until the flame was an inch from my eyes. I could see something. I moved closer still. I was almost there. I was just starting to understand what I saw when the flame kissed something above my head. Then the smell hit me and the room was suddenly bright yellow orange! My hair was on fire!

I screamed and smacked my head as hard as I could. My burning hair singed my hand. Next thing I knew, my mother was there. She tore off her rapa and threw it over my head.

The electricity suddenly came back on. My brothers ran in, then my father. The room smelled awful. My hair was half gone and my hands were tender.

That night, my mother cut my hair. Seventy percent of my lovely long hair, gone. But it was what I saw in that candle that stayed with me most. I’d seen the end of the world in its flame. Raging fires, boiling oceans, toppled sky- scrapers, ruptured land, dead and dying people. It was horrible. And it was coming.

My name is Sunny Nwazue and I confuse people.

I have two older brothers. Like my parents, my brothers were both born here in Nigeria. Then my family moved to America, where I was born in the city of New York. When I was nine, we returned to Nigeria, near the town of Aba. My parents felt it would be a better place to raise my brothers and me, at least that’s what my mom says. We’re Igbo—that’s an ethnic group from Nigeria—so I’m American and Igbo, I guess. You see why I confuse people? I’m Nigerian by blood, American by birth, and Nigerian again because I live here. I have West African features, like my mother, but while the rest of my family is dark brown, I’ve got light yellow hair, skin the color of “sour milk” (or so stupid people like to tell me), and hazel eyes that look like God ran out of the right color. I’m albino.

Being albino made the sun my enemy; my skin burned so easily that I felt nearly flammable. That’s why, though I was really good at soccer, I couldn’t join the boys when they played after school. Although they wouldn’t have let me anyway, me being a girl. Very narrow-minded. I had to play at night, with my brothers, when they felt like it.

Of course, this was all before that afternoon with Chichi and Orlu, when everything changed.

I look back now and see that there were signs of what was to come.

Okorafor is changing fantasy. Pretty much anything you read from her catalog of work is beautiful, and intricately crafted.