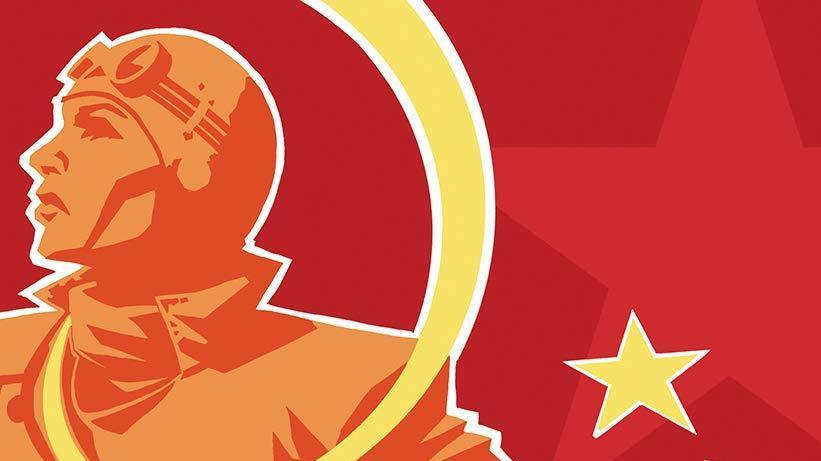 “You know what it’s like when a P.O.-2 comes along, if you’re on the ground you can hear it for miles, that pop-pop-popping the engine makes… Two more missions like that and we’ll all be done with, unless we can magically stop them from hearing us coming.”

As the German Army smashes deep into Soviet Russia and the defenders of the Motherland retreat in disarray a unique new squadron arrives at a Russian forward airbase. Like all night bomber units they will risk fiery death flying obsolete biplanes against the invader–but unlike the rest these pilots and navigators are women. In the lethal skies of the Eastern front they will become a legend–known to friend and foe alike as The Night Witches.With casualties mounting and the conflict devouring more and more of her comrades Lieutenant Anna Kharkova quickly grows from a naive teenager to a hardened combat veteran. The Nazi foe is bad enough but the dreadful power of her country’s secret police makes death in battle almost preferable. Badly wounded and exiled from her own people Anna begins an odyssey that will take her from the killing fields of the Second World War to the horrific Soviet punishment camps–and at the top of the world high above the freezing Arctic Ocean the Night Witch finds she has one last card to play.

Women’s roles in war are always played down or seen as insignificant. Even though, often, women played a huge role in major battles or information gathering. During world war II, women took over major industrial roles typical staffed by men. Women built ships, armaments, and trucks. They took over massive equipment operation, and difficult hard labor. For the US, women staffed over 400,000 support staff positions assisting in the war effort of US militaries. They are essential, but often their stories are not told. Enter Garth Ennis of Preacher and The Boys fame. Plus, about twenty other as great series. He is known for his deep storytelling, and no holds barred dialog. Pretty much anything goes when it comes to an Ennis novel. This is an important point to bring up because The Night Witches is based on a real squadron of female fighter pilots during World War II. Ennis had to mix his gritty storytelling and balance it against any accurate details he can glean from actual true-life events. Ennis quotes John Keegan’s shocking dismissal of women as fighter pilots or even as fighters in general with “‘Warfare is … the one human activity from which women, with the most insignificant exceptions, have always and everywhere stood apart … [women] never, in any military sense, fight men.'”[1] Little is known specifically about The Night Witches, the soviet government has set to downplay its reliance on female personnel. But much can be guessed from the few personal histories that survived.

In response, Ennis has created a character that is a composite of the available information about female fighters at the time in the form of Anna Kharkova[1]. The premise of the story is disjointed, and I found it challenging to follow, but loosely it is about a group of women, named The Night Witches or Ночные ведьмы or in German, die Nachthexen. (The Germans dubbed them their moniker.) They flew nighttime bombing raids and supported Russian defense and offense. Anna flies everywhere and in all sorts of battles. She has love affairs, loses friends, kills people, and as the story progresses, you can tell that little bits of her soul dies. I think that it is the chaotic and disjointed nature of the story that makes it confusing. I liked Anna as a character, I enjoyed her fierce nature, and even though she is tiny, she is big in life and personality. Those who seek to underestimate her, do it only once. But I did not connect with her as a character except the little snippets of dialog that resonated with me.

Graphically, Russ Braun and Tony Aviña’s artwork shine. It is gorgeously done with massive air gun battles and vivid war scenes. The artwork is almost reminiscent of World War 2 recruitment and propaganda posters. You feel like you are there in the scenes.

This story is a hard one to judge because, on the one hand, the artwork and war scenes are some of the best I have read. Snippets and vignettes of Anna’s trials as a fighter pilot and on into POW camps are poignant and masterfully done. But as a whole, the story is too disjointed for me to care about Anna genuinely. Or understand the gravity of her actions at the end. I recommend it for the artwork and because it is Ennis because even bad Ennis is still a cut above most other storytellers, but I don’t think this is his best work.

I reviewed a digital copy of this from Eidelweis in exchange for my open and honest review.

His entire Preacher series is amazing. Check it out, as well as the TV adaption of it. Well worth the watch.

Ennis began his comic-writing career in 1989 with the series Troubled Souls. Appearing in the short-lived but critically-acclaimed British anthology Crisis and illustrated by McCrea, it told the story of a young, apolitical Protestant man caught up by fate in the violence of the Irish ‘Troubles’. It spawned a sequel, For a Few Troubles More, a broad Belfast-based comedy featuring two supporting characters from Troubled Souls, Dougie and Ivor, who would later get their own American comics series, Dicks, from Caliber in 1997, and several follow-ups from Avatar.

Another series for Crisis was True Faith, a religious satire inspired by his schooldays, this time drawn by Warren Pleece. Ennis shortly after began to write for Crisis’ parent publication, 2000 AD. He quickly graduated on to the title’s flagship character, Judge Dredd, taking over from original creator John Wagner for a period of several years.

Ennis’ first work on an American comic came in 1991 when he took over DC Comics’s horror title Hellblazer, which he wrote until 1994, and for which he currently holds the title for most issues written. Steve Dillon became the regular artist during the second half of Ennis’s run.

Ennis’ landmark work to date is the 66-issue epic Preacher, which he co-created with artist Steve Dillon. Running from 1995 to 2000, it was a tale of a preacher with supernatural powers, searching (literally) for God who has abandoned his creation.

While Preacher was running, Ennis began a series set in the DC universe called Hitman. Despite being lower profile than Preacher, Hitman ran for 60 issues (plus specials) from 1996 to 2001, veering wildly from violent action to humour to an examination of male friendship under fire.

Other comic projects Ennis wrote during this time period include Goddess, Bloody Mary, Unknown Soldier, and Pride & Joy, all for DC/Vertigo, as well as origin stories for The Darkness for Image Comics and Shadowman for Valiant Comics.

After the end of Hitman, Ennis was lured to Marvel Comics with the promise from Editor-in-Chief Joe Quesada that he could write The Punisher as long as he cared to. Instead of largely comical tone of these issues, he decided to make a much more serious series, re-launched under Marvel’s MAX imprint.

In 2001 he briefly returned to UK comics to write the epic Helter Skelter for Judge Dredd.

Other comics Ennis has written include War Story (with various artists) for DC; The Pro for Image Comics; The Authority for Wildstorm; Just a Pilgrim for Black Bull Press, and 303, Chronicles of Wormwood (a six issue mini-series about the Antichrist), and a western comic book, Streets of Glory for Avatar Press.

In 2008 Ennis ended his five-year run on Punisher MAX to debut a new Marvel title, War Is Hell: The First Flight of the Phantom Eagle.

In June 2008, at Wizard World, Philadelphia, Ennis announced several new projects, including a metaseries of war comics called Battlefields from Dynamite made up of mini-series including Night Witches, Dear Billy and Tankies, another Chronicles of Wormwood mini-series and Crossed both at Avatar, a six-issue miniseries about Butcher (from The Boys) and a Punisher project reuniting him with artist Steve Dillon (subsequently specified to be a weekly mini-series entitled Punisher: War Zone, to be released concurrently with the film of the same name).