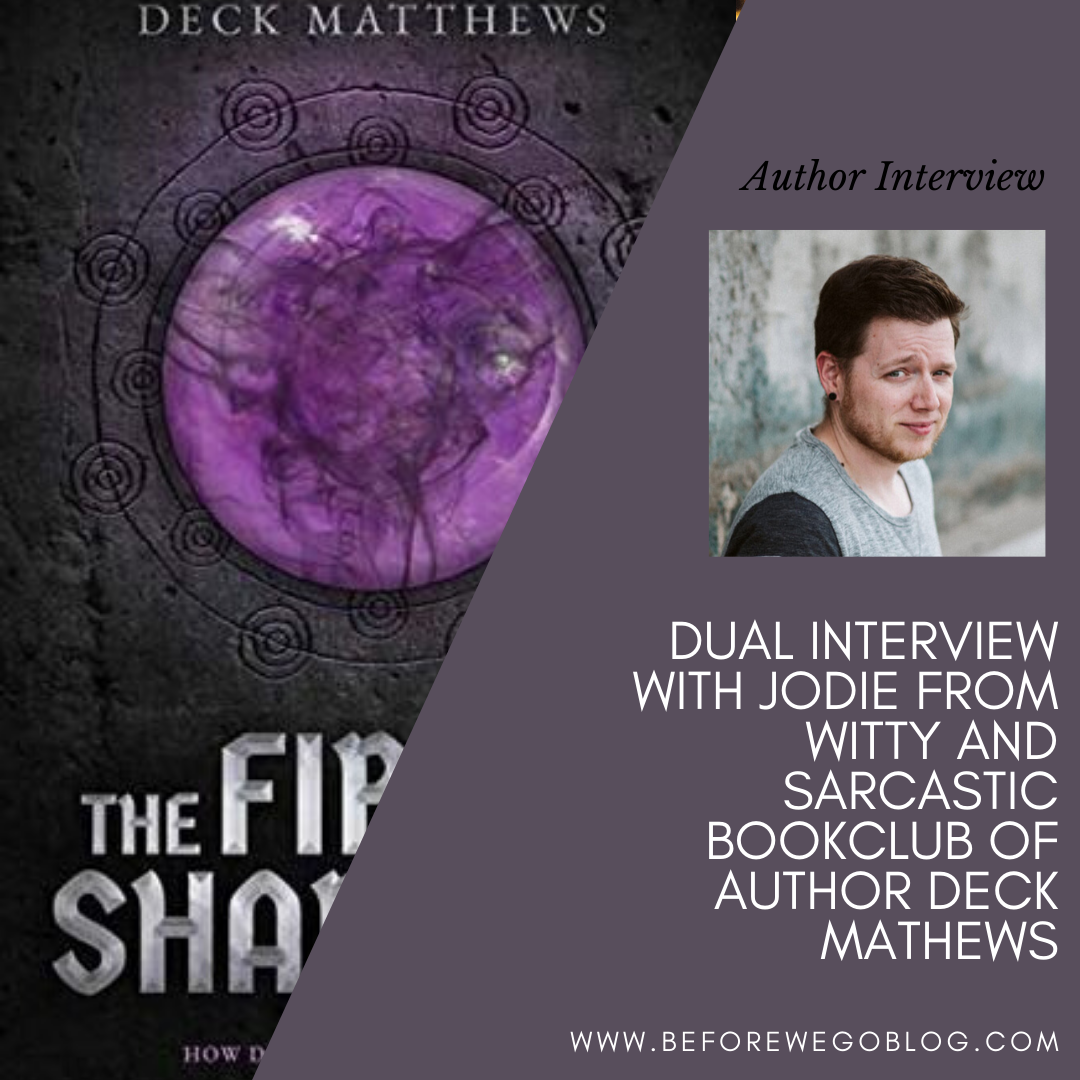 By Beth TablerJuly 8, 2020No Comments

Deck Matthews “I tend to be pretty organic with my initial drafting, so I just kind of let the magic evolve through the initial framework of the story.”

Deck Matthews sat down with Jodie and I to talk about his writing, his influences, and how he writes books.

Jodie – First off, tell us a little bit about the Riven Realm series.

The Riven Realm is an epic fantasy story told through a series of novellas. It’s a bit of a different approach to fantasy, a genre known for its massive, doorstop tomes—like the A Song of Ice and Fire books or basically anything by Tad Williams. I enjoy the big books and eventually hope to write a few myself, but the idea behind The Riven Realm books was to write in shorter, episodic installments.

My reasons for this are two-fold. First, I only write part-time. My full-time gig is working as a front-end web developer. Between that and my responsibilities as a husband and father, my time is finite. Working in smaller installments has allowed me to release at a more rapid rate (though still not as along as I’d like).

Secondly, as a reader I sometimes like a break from all the huge fantasy novels. My hope is that readers will be able to relax with a quick and entertaining read—sort of like streaming a quick episode of your favourite TV show instead of sitting down for a Lord of the Rings marathon!

Jodie – I loved the way magic works in your books. How did your version come to exist, and did it change at all from its conception to the final draft?

Thanks! The magic of Varkas started in the very first scene of my very first draft, in which I referred to a “Flameborn Prince.” Even as I wrote the words, I knew that this was the seed of the world’s magic system. The next chapter of that draft featured a young man who was “joined” to a raven, which was the beginning of what became melding magic.

I tend to be pretty organic with my initial drafting, so I just kind of let the magic evolve through the initial framework of the story. It was only later that I went back and started to codify the system, parsing the magic into six distinct forms and setting out the rules for each.

There’s still a lot to discover, too, and more about the magic will be revealed over time.

Jodie – Were there any books or authors that inspired you to start writing?

Absolutely. I started writing my very first fantasy novel shortly after first reading David Eddings’ series The Belgariad and The Mallorean. That novel was actually a co-authored effort with a friend, who was highly influenced by Terry Brooks’ Shannara books, so I picked those up next. In retrospect, Brooks ended up having an even greater influence on me as a writer!

Jodie – What drew you to fantasy (either reading or writing it)? Do you have a favorite book? What do you love about it?

That’s a great question. For me, I think the answer comes in several parts. Even as a very young kid, I tended to be drawn more toward the fantastic. My favourite toys and cartoon were Masters of the Universe, which has its roots in Sword & Sorcery and obvious influences from stories like Conan (though reworked for children, of course). There was just something about the sword-wielding hero that always appealed to me as a kid, and it’s stuck with me.

Beyond that, there’s a sense of escapism, a sort of juxtaposition against the rigours of our postmodern, hyper-connected and technology-saturated world that can be highly appealing to me.

Outside of the reading that I did while working on my literature degrees during the early 2000’s, I’d say that 85-90% of what I’ve read for leisure has been fantasy or science fiction. Even with science fiction, I tend to prefer universes like Star Wars, which are basically just space fantasy!

Fleeing the ruins of his broken life, Caleb Rusk arrives in the sleepy village of Timberford. But when a series of brutal and vicious attacks stir the community into a terrified frenzy, Caleb and his friends must join with his bond-brother, Carvesh Tarne, a Cinderborn healer and a reclusive trapper to defend the village from the swarm of shadowbeasts that threatens to destroy them.

In the city of Taralius, a high ranking abbot is butchered in the heart of his cathedral. With evidence pointing to the involvement of the notorious assassins known as the White Glove, Second Corporal Avendor Tarcoth finds himself faced with the spectres of a past he thought he’d left behind. Meanwhile, the blind old sage, Tiberius Alaran, tracks down a lead that could help explain why Hearthborn are suddenly burning out in the city—all while trying to protect secrets of his own

But unbeknownst to either Avendor or Tiberius, a new player is sent to join the game—and her’s is a kiss of death.

Jodie – All of your characters are unique and stand out. Which character of yours was your favorite to write? Was any character harder to develop or write about?

I’m pretty much obliged to say that I like writing all my characters, aren’t I? I love them all in their own way. That being said, I do tend to find myself really enjoying the scenes written from the perspective of Palawen Ty. Despite her quiet personality, she does tend to be a bit rash and impulsive, which has led to some pretty fun action sequences!

Probably the most challenging character to write is Tiberius. Due to his blindness, I’m writing his perspective based on non-visual stimuli. He spends a fair bit of time in contemplation and conversation, which is relatively straightforward, but the few action sequences in which he finds himself presented a unique challenge.

Jodie – What was the best money you ever spent as a writer?

Hands down, the best money I ever spent was my purchase of Scrivener. It’s been a hugely beneficial application that has really helped refine my overall workflow.

Beth – What was an early experience where you learned that language had power?

That’s a really interesting question, and I’m not sure that my answer will be the sort of thing that anyone might expect.

I used to dream in French.

I’m Canadian, and we have two official languages here—English and French. When I started school, my parents enrolled me in the French Immersion program, which saw me fully immersed in French during my school day. All my classwork and homework was in French, so I’d often spend six to eight hours a day reading, writing and/or conversing in French. It became such a part of me that it would occasionally become the language of my dreams.

I don’t use French nearly as much anymore, and I haven’t dreamed in that language since I was a kid, but the experience has remained with me. For me, it’s a remarkable example of just how tightly language is bound up in our consciousness!

THE PAST IS A FRAGILE THING

For Shade, returning to Taralius is like a homecoming she never wanted. She soon finds that old relationships are changed and past contacts have turned sour. Worse yet, a bitter enemy stalks the streets—a venomous assassin who’s sworn to deliver Shade to her own sending.

Meanwhile, others in the city are delving into their own pasts. While Second Corporal Avendor Tarcoth re-establishes contacts from the shadowy life he thought he’d left behind, Tiberius follows the trail of an unexpected message toward an equally unexpected encounter. Neither man is aware of the dangers that stalk them.

Far across the Realm, the man calling himself Carvesh Tarne leads a small company through the depths of Jadenwood in search of answers surrounding the shadowbeasts that nearly destroyed his home and family. But answers aren’t always what they seem. Sometimes they fight back.

Beth – What period of your life do you find you write about most often? (child, teenager, young adult)

Later this year, I’ll be releasing a new novel I wrote for my daughters. It’s titled The Portal of Tears: Beyond the Shimmering, and tells the story of thirteen-year-old Trisha Banymor.

Beth – Do you hide any secrets in your books that only a few people will find?

Beth – Finally, if you had a dinner party and could invite three people, alive, dead or fictional, who would they be?

But more than anything, I’d just want one more chance to say “I love you.”