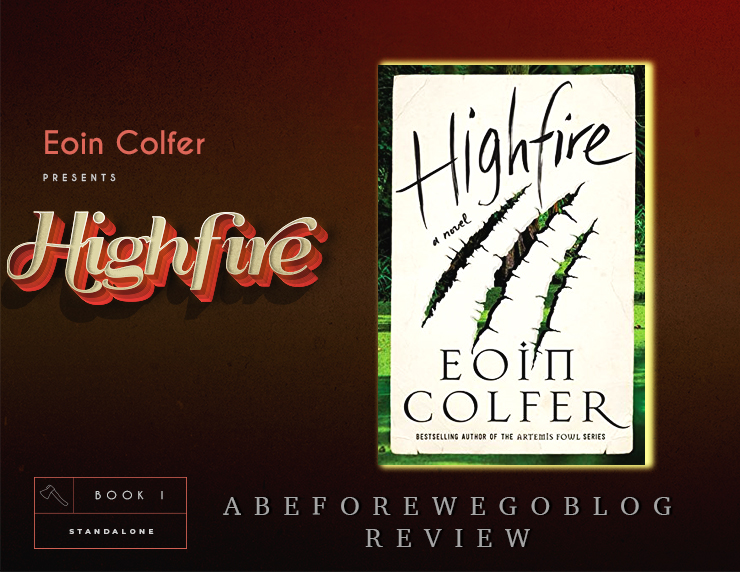 Dragons and Snark in Highfire by Eoin Colfer

Adult Dragon Fantasy From the Author of Artemis Fowl

“Waxman smiled, and a person looking closely might spot that there seemed to be a second row of teeth lurking behind the font set. “Yeah, Squib’s an operator, sure enough.”

From the New York Times bestselling author of the Artemis Fowl series comes a hilarious and high-octane adult novel about a vodka-drinking, Flashdance-loving dragon who lives an isolated life in the bayous of Louisiana—and the raucous adventures that ensue when he crosses paths with a fifteen-year-old troublemaker on the run from a crooked sheriff.

In the days of yore, he flew the skies and scorched angry mobs—now he hides from swamp tour boats and rises only with the greatest reluctance from his Laz-Z-Boy recliner. Laying low in the bayou, this once-magnificent fire breather has been reduced to lighting Marlboros with nose sparks, swilling Absolut in a Flashdance T-shirt, and binging Netflix in a fishing shack. For centuries, he struck fear in hearts far and wide as Wyvern, Lord Highfire of the Highfire Eyrie—now he goes by Vern. However…he has survived, unlike the rest. He is the last of his kind, the last dragon. Still, no amount of vodka can drown the loneliness in his molten core. Vern’s glory days are long gone. Or are they?

A canny Cajun swamp rat, young Everett “Squib” Moreau does what he can to survive, trying not to break the heart of his saintly single mother. He’s finally decided to work for a shady smuggler—but on his first night, he witnesses his boss murdered by a crooked constable.

Regence Hooke is not just a dirty cop, he’s a despicable human being—who happens to want Squib’s momma in the worst way. When Hooke goes after his hidden witness with a grenade launcher, Squib finds himself airlifted from certain death by…a dragon?

The swamp can make strange bedfellows, and rather than be fried alive so the dragon can keep his secret, Squib strikes a deal with the scaly apex predator. He can act as his go-between (aka familiar)—fetch his vodka, keep him company, etc.—in exchange for protection from Hooke. Soon the three of them are careening headlong toward a combustible confrontation. There’s about to be a fiery reckoning, in which either dragons finally go extinct—or Vern’s glory days are back.

A triumphant return to the genre-bending fantasy that Eoin Colfer is so well known for, Highfire is an effortlessly clever and relentlessly funny tour-de-force of comedy and action.

Do you know what happens when author Eoin Colfer of Artemis Fowl fame decides he wants to write an adult book? You get dragons and snark. You get Highfire. I am a particular fan of the snark, pretty much as it comes in all forms because I like my characters to swagger and be cheeky bastards.

Vern, short for Wyvern, is hiding on an island in a Louisiana swamp. He minds his own business, doing as he has done for the last 3000+ years. He hates humans, much like an old man who hates kids playing on his lawn. They are a nuisance, cause all sorts of issues, and usually end up trying to hunt you down with pitchforks. He loves Netflix, Flashdance, the incredible 1980s classic, and Vodka. But to get these necessities of life, he needs a minion to fetch things for him. Currently, a half-human creature named Waxman has been helping him out; they go back for a awhile. Vern saved Waxman from a life in the circus fifty years ago. But Waxman needs to go underground, or really bury himself in Vern’s dragon shit to regenerate himself for a few months, so Vern needs a new minion.

Also, in the town lives a resourceful 15-year-old boy named Squib. Squib is a hustler. He does anything he can to make a dollar, and that includes fetching Vern vodka and helping him with his cable. To make things even more interesting, the town constable, sociopath Regence Hooke, is off to create himself a drug trade through Vern’s little piece of swamp paradise. Hooke’s plans are an issue for both Squib, who gets caught up in the machinations of Hooke and Vern, as well as Vern himself. Thrown in a whole lot of dragon fire, exciting fights, and a blowout on Honey Island, and you have yourself a story.

I have known Colfer from the much-beloved Artemis Fowl children’s series. He writes compelling characters, with fun offbeat senses of humor and excitement. However, this story is touted as an adult story, and I didn’t get that sense when reading it. Yes, there is cursing, and yes, Hooke is very much a psychopath. But something was missing in the execution that screamed adult to me. It was a good story. Squib is a great and lovable protagonist, and Vern is a whole lot of grumpy scaly fun, but the story did not feel fully fleshed out beside the characterizations and fight scenes. Both of which are very good.

It was only somewhat meh for me.

Highfire is released on January 28th, get your copy below.

I received a copy of this from the publisher, Harper Perennial in exchange for my open and honest review.

Eoin Colfer (pronounced Owen) was born in Wexford on the South-East coast of Ireland in 1965, where he and his four brothers were brought up by his father and mother, who were both educators.

He received his degree from Dublin University and began teaching primary school in Wexford. He has lived and worked all over the world, including Saudi Arabia, Tunisia and Italy. After the publication of the Artemis Fowl novels, Eoin retired from teaching and now writes full time. He lives in Ireland with his wife and two children.