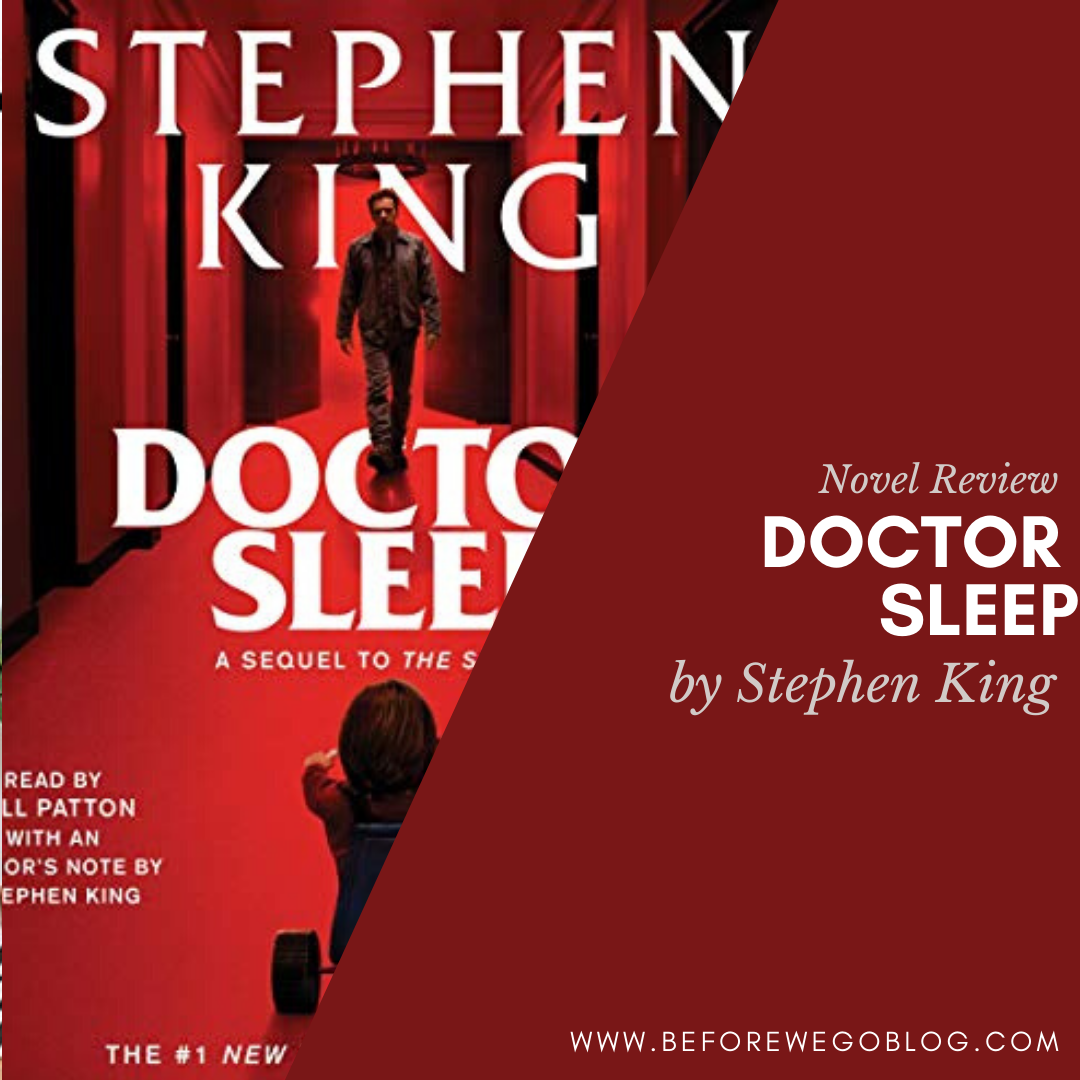 Not As Shiny As the Shining, But Doctor Sleep is Still Very Good

A Less Shiny Sequel, But Still A Must Read for the King Fan

by Stephen King and Richard Chizmar

“There’s nothing to be scared of.”

Instead of taking Charlie’s pulse – there was really no point – he took one of the old man’s hands in his. He saw Charlie’s wife pulling down a shade in the bedroom, wearing nothing but the slip of Belgian lace he’d bought her for their first anniversary; saw how the ponytail swung over one shoulder when she turned to look at him, her face lit in a smile that was all yes. He saw a Farmall tractor with a striped umbrella raised over the seat. He smelled bacon and heard Frank Sinatra singing ‘Come Fly with Me’ from a cracked Motorola radio sitting on a worktable littered with tools.

He saw a hubcap full of rain reflecting a red barn. He tasted blueberries and gutted a deer and fished in some distant lake whose surface was dappled by steady autumn rain. He was sixty, dancing with his wife in the American Legion hall. He was thirty, splitting wood. He was five, wearing shorts and pulling a red wagon. Then the pictures blurred together, the way cards do when they’re shuffled in the hands of an expert, and the wind was blowing big snow down from the mountains, and in here was the silence and Azzie’s solemn watching eyes.”―

Stephen King returns to the characters and territory of one of his most popular novels ever, The Shining, in this instantly riveting novel about the now middle-aged Dan Torrance (the boy protagonist of The Shining) and the very special 12-year-old girl he must save from a tribe of murderous paranormals.

On highways across America, a tribe of people called The True Knot travel in search of sustenance. They look harmless – mostly old, lots of polyester, and married to their RVs. But as Dan Torrance knows, and spunky 12-year-old Abra Stone learns, The True Knot are quasi-immortal, living off the “steam” that children with the “shining” produce when they are slowly tortured to death.

Haunted by the inhabitants of the Overlook Hotel where he spent one horrific childhood year, Dan has been drifting for decades, desperate to shed his father’s legacy of despair, alcoholism, and violence. Finally, he settles in a New Hampshire town, an AA community that sustains him, and a job at a nursing home where his remnant “shining” power provides the crucial final comfort to the dying. Aided by a prescient cat, he becomes “Doctor Sleep.”

Then Dan meets the evanescent Abra Stone, and it is her spectacular gift, the brightest shining ever seen, that reignites Dan’s own demons and summons him to a battle for Abra’s soul and survival. This is an epic war between good and evil, a gory, glorious story that will thrill the millions of hyper-devoted fans of The Shining and wildly satisfy anyone new to the territory of this icon in the King canon.

Doctor Sleep, Stephen King’s uber anticipated sequel to his 1977 horror novel The Shining was in almost all ways, worth the wait. Fifty pages into Dr. Sleep, my only thought was “my god, King is a maniac.”

Danny, the lovable and haunted boy, son of Jack Torrance from the original novel, is all grown up now. Instead of Danny having the life all us readers wanted him to have, Danny is a drunk. A scoundrel. A mess. He spends years trying to blot and enshroud the shinning in alcohol, women, and drugs in the vain hope that he could function as a human adult. He often fails. When Danny obtains a tentative truce with his alcoholic demons via AA, he needs to come to terms with his “gift” and maybe, just maybe, help some people along the way.

Character-wise, even though many a King fan wanted the easy happily ever after, for Danny, god knows he has been traumatized enough, I think the direction that King went with Danny is much more solid and realistic. Danny is a mess because he came from a mess. He has had horrific childhood trauma, lost his father, been chased around by ghouls, and eventually succumbs to alcoholism. It feels like a much more real character and one that I can empathize with than say, the white picket fence and 2.5 kids.

We also eventually meet Abra, who is Danny as a child minus childhood trauma. He could have been what she is, generally happy and well adjusted under different circumstances. However, childhood demons aside, both Danny and her have a core of steel that I find in most of King’s protagonists. King doesn’t tend to write characters that are wishy-washy or weak. These are no exception.

We are the True Knot,” they responded. “What is tied may never be untied.―

The villain, and great horror of the story, because this is Stephen King and we need to have a great villain, is a woman that is called Lady in the Hat. She is driven, mean, intelligent, and utterly sure of her position and spot in the food chain. She is a perfect nemesis for Abra and, by extension, for Danny. She was terrifying in some scenes, much like a cult leader leading her deadly flock of psychic lizard-like RV geriatrics. (This is a sentence that I never thought I would say, but there you go.) They want Abra; they need Abra’s shinning and will do anything to get it.

Doctor Sleep is a great second act to the life of Danny Torrance. At times the story is terrifying, especially in the last 30%. Other times the story meanders and takes its sweet time doling out the details to Danny’s story. It turns and twists, but I don’t believe the story ever lulls. It takes it’s time over the almost 700 pages and gives you beauty, light, self-destruction, and self-acceptance. Is it as scary as the original? No. Nothing much is. But it doesn’t have to be.

It is a worthy sequel to the classic that I highly recommend.