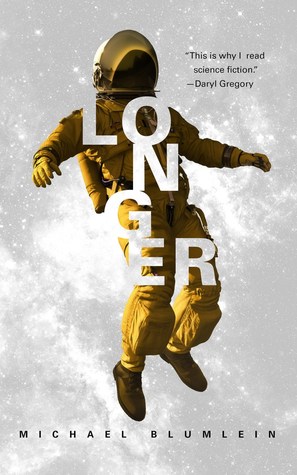 “Death was a journey, composed of little deaths, little steps along the way. Sometimes the steps were close together, tightly packed, and death came rapidly. Sometimes they were spaced far apart, and it approached at a crawl. Suicide offered a choice of speeds. it was the ultimate in self-determination.”

“This is why I read science fiction.”–Daryl Gregory

Gunjita and Cav are orbiting in space performing R & D pharmaceutical studies for Gleem Galactic. They are wealthy enough to participate in rejuvenation: rebooting themselves from old age to jump their bodies back to their twenties. You get two chances. The third time is a calculated risk.

Gunjita has “juved” for her second and last time, but Cav is reluctant to join her. Instead he’s obsessed with the unidentified object that they encounter out in space. Is it alive? He believes that it just might be. The prospect of first contact is possible, but their marriage may not survie the challenge.

“Michael Blumlein has written a novella that is full of hard science and strange, beautiful images, and also asks the biggest of questions–about mortality, aging, the persistence and changeability of love, and the search for meaning in our lives. I read it in two sittings, and it brought me to tears. . . . Don’t miss this.”--Daryl Gregory

“No one can evoke both life’s beauties and its sorrows with the brilliance of Michael Blumlein. In meticulous and resonant prose, Blumlein examines a marriage with a long, loving history and a questionable future. Wise and beautiful, provocative and deeply, deeply satisfying.”--Karen Joy Fowler

“She could start with her own scent. Plenty to work with. Currently, droplets of sweat surrounded her, like effervescent bubbles of champagne.”

“An island of bliss in a sea of amnesia”

This story touches on some important issues of what it means to live, what it means to die, and when do you live enough life. Even with its loftier goals of in-depth discussion and narrative, the story falls bitterly, and entirely flat for me.

The story involves four different characters over the course of a few weeks.

Cav – Scientist, 84. Cav works on a space station with his wife, Gunjita. They study a drug that can halt and reverse aging, but is not successful yet. He has rejuvenated once already and has not rejuvenated the second and final time. Cav has reservations about the rejuvenation process and the socio and psychological ramifications.

Dash – A friend and newly rejuvenated doctor. He has a new unique ability in his fingertips.

Asteroid with weird organic splatter – This object is a point of contention between Gunjita and Cav. Is it alive, or inert?

Cav and Gunjita work in a space station studying an anti-aging drug that. If they are successful, they could roll back death, turning humans into Methuselah if you are rich enough to afford it. Obvious class conflict with extended life given only to those born to privilege or circumstance. The repercussions of this are something that Cav struggles with. Cav and Gunijta find an asteroid speckled with what looks like vomit. Cav believes that the speckle could be sentient and Gunjita thinks that it is not. This causes a rip in their marriage. This story attempts to speak very plainly about age and marriage but I found that the marriage depicted in the story lacked realism and edged towards vapidity. As a couple that has been married for 50 years as well as them being two prominent and respected scientists, their discussion of science and relationships seemed shallow. This, paired with the characterization of youth versus age threw me out of the story many times. The trope of youth as a place of wonder and excitement, while age is the place to be endured, is flat and unrealistic. Youth does not make you a magically vibrant person. Nor, does age make you wise.

This story had quite a lot of graphic representations of scientific horrors involving embryos and could be triggering for some. I just found it to be gratuitous on top of the bloated and unrealistic narrative.

This is a bitter story, full of sound and fury, Signifying nothing. Because in the end, I felt nothing. Nothing towards the tale, the characters, their plight. Nothing. Maybe that was Blumlein’s intent? Because in the end, it is all nihilism and although I wanted to like this story, Blumlein is an excellent writer; I couldn’t.

Calling out some positives, Blumlein is excellent at creating scenes and world building. I was able to build a clear picture in my mind of the setting. Also, I want to remind you lovely reader, that this is an entirely subjective review. You may want to read it because the things you are looking for are things that I do not. If you read this and love it, I would love to talk to you about it. But for me, even with his excellent setting creation, I cannot get behind the sentiment, characterization, pacing, or message of the story. I cannot recommend it.

If you are looking for a story about age, might I recommend Old Man’s War by John Scalzi. The two stories are tonally different, but I found Scalzi’s depiction of age more realistic.

I received a copy of this from Tor.com via Netgalley in exchange for my open and honest review.

About the Author – Michael Blumlein

Michael Blumlein, M.D. is an American fiction writer and a physician. Most of his writing is in or near the genres of science fiction, fantasy, and horror. His novels include The Healer, The Movement of Mountains and X, Y. He has been nominated for the World Fantasy Award and the Bram Stoker Award. His short stories have been collected in anthologies and published in Interzone and The Magazine of Fantasy & Science Fiction, among others.