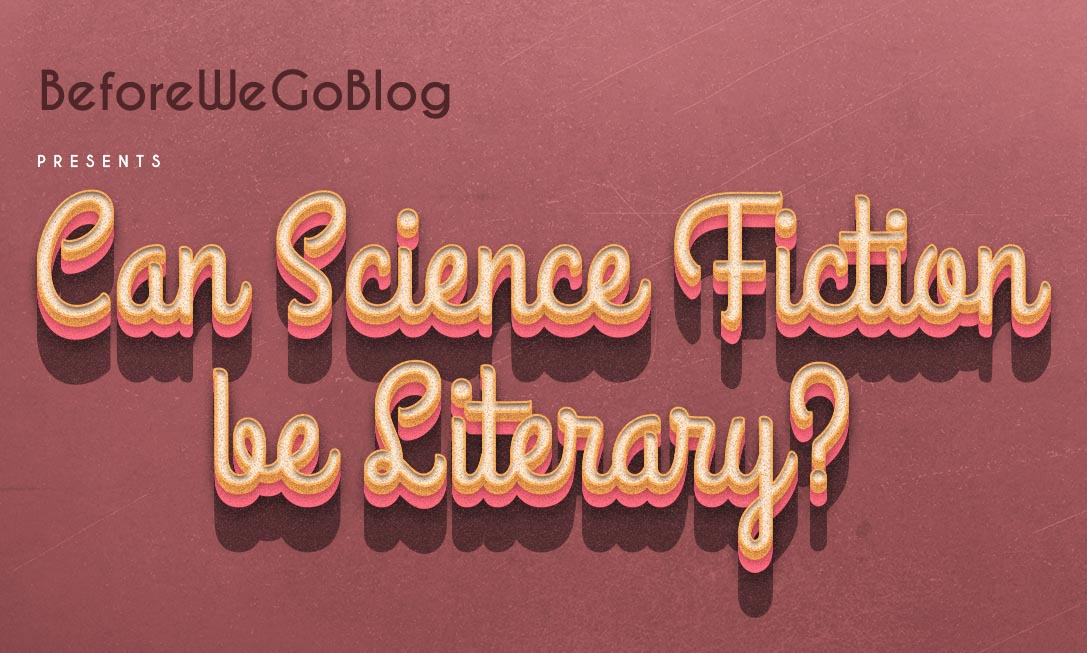 Can Science Fiction Be Literary?

Can Science Fiction be Literary?

“If you’ve been in any bookstore in your lifetime, you’re probably familiar with that most peculiar of book retail locales: the Fantasy & Science Fiction section. This strange and sweaty place is kept separate from the rest of the bookstore so that its residents, the soap-averse fans of Fantasy & Science Fiction novels, can go about their plots and dark rituals without disturbing any of the normal-smelling clientele.”

credit – “You are all Just Jealous of my Jetpack” – Tom Gould

It seems like, according to society science fiction is the realm of the great unwashed. The weird outcasts, occultists, and fanatics that brutally covet the meager morsels of plot delivered by their favorite author. The socially awkward strata of society that as cracked.com put it, smells. The neckbeards, the homely, the virgins – These are the perusers of science fiction and fantasy. Obviously, I am being hyperbolic. Science fiction readers are as diverse as the stars in the sky they read about. They are doctors, lawyers, teachers, and students. But to many, the perception of the genre as a whole is that it is populated and written for 13-year-old boys – space battles, aliens, and laser guns abound.

This could not be further from the truth. Granted, there are plenty of aliens and laser guns in science fiction; there is also a ton of excellent writing. It is time for the world to look at science fiction as more than imagination run amok. For something to be considered literature, and valuable to society as a whole, they need to be works of exceptional artistic merit. Stories that illuminate and empower the reader more than just passing fancy. They need to be affective, and they need to investigate the human condition. Science fiction does this in spades.

Science fiction author and Emeritus physics professor Gregory Benford said that there are two distinct ways to view our place in the universe; humanity is either seen as a context through which to view the universe, or the universe is seen as a context through which to view humanity. [1] Non-genre or speculative literature looks at the human condition as a way to view our lives on this planet. However, science fiction, in its way, teaches a vital lesson that is not found in regular literature. And it is this, humility. Science fiction posits that we could be both grander and less important as a species in the face of a vast universe. It isn’t always about us, and it teaches us to look inward at humanity from the outside.

For example, in 2001 Space Odyssey by Arthur C. Clarke, Clarke writes of an ancient race using a device to alter the course of human history. The device inspires a group of neanderthals to use a tool to kill and animal, thus ending their starvation. This, in turn, allows the group to thrive and reproduce. The story jumps forward thousands of years to 1999, where scientists have discovered a black monolith on the moon. It creates a piercing radio signal that scientists discover is beamed towards a moon of Saturn. This then creates the need for a manned shuttle mission. The ship is maintained by an AI named Hal, who eventually becomes sentient. Although Hal is sentient and aware of itself, it cannot rationalize morality. Through the dissection of 2001 Space Odyssey, various themes emerge: firstly, the perils of technology or technology run amok. Secondly, evolution in action, thirdly, how small humanity is within the universe. The main protagonist, David Bowman, realizes how infinitesimally small the conflicts and politics of the world are when viewed from the outside. He learns to value things more significant than himself. This story and the lessons it teaches have considerable literary merit. What better way to learn about the human condition than to do so by placing humans at odds with aliens or technology run amok. These unfamiliar circumstances allow an author to investigate something that doesn’t happen day to day, therefore providing unique insights that are not part of the mundane.

“Science fiction is not quirky anymore; we live in a futuristic world now.” Bonnie Hammer

Another great and more current example of literary science fiction is Station 11 by Emily St. John Mandel. Dystopia is a pretty large subgenre in science fiction. There are a lot of examples of quality writing. For instance, Stephen King’s The Stand or Earth Abides by George Stewart. But Station 11 is something extraordinary. What sets this novel apart from its contemporaries is the almost tenderness in which Mendel writes her characters. It matters less about the event that caused the great devastation to the human race, then what the human race does to sustain itself. The moral that a reader can glean from Station 11 is that life is more than just surviving. There must be music and art and things that inspire you. There must be poetry for human souls to survive. It is a deeply affecting novel that is worthy of all the acclaim and praise that it has received.

Good literature is all around us and in many forms. Even if science fiction authors choose to tell their stories in new and exciting ways, it still can be affecting. There are books worthy to read and study within the science fiction genre and I hope that as the preconceived notions of the genre change and develop people can look at the genre for what it often is, masterful and thought provoking.