Books That Made Me: The Crystal Shard by R. A. Salvatore

Home » All Reviews » Books That Made Me: The Crystal Shard by R. A. Salvatore 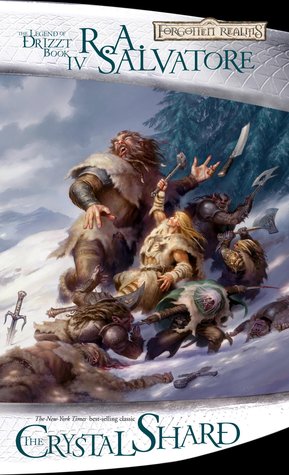 I am a gluttonous reader and despaired at my supremely “busy” child who was unwilling or unable to sit still long enough to allow a book to sink its teeth into his imagination. Sure, he knew how to read but never willingly sat down with a book. He preferred to play outside – certainly an activity of significant importance to a child. However, occasionally, quietly reading is a better (read: less irritating to Mom) way to spend time. Doctor’s office waiting rooms? Reading. Stormy days unfit for tree-climbing? Reading. Road trips? Reading. Suffering through your sister’s dance recital rehearsal? You guessed it, reading. Yet, I struggled finding books he would WANT to read. Reading should not be used as a punishment or penance. I wanted him to discover, for himself, the worlds of wonder which leap off the page and come to life on the ever-available movie-screen of our minds. All I could do was keep offering options and cross my fingers one would stick.

When he was nine-years-old or so, I left a well-loved copy of The Crystal Shard by R.A. Salvatore on the kitchen table before I left for the day. We’d been watching the Lord of the Rings movies on DVD and I hoped the Gimli-esque representation of Bruenor Battlehammer on the cover would pique his interest. Imagine my delight when I came home from work to find him curled up in a corner of the couch with his brow furrowed and eyes racing across the page! It took him two weeks to finish Shard, reading after homework, before bed, and any other moments of “down” time. He talked about the book. He asked if I’d read it (of course I had!) He argued with the characters and laughed out loud. And when he was done, he asked for Streams of Silver, the next book in the series. Then the next, and the next.

My child had not given up his rambunctious play, rather, he’d added new realms to explore as he raced around the yard, waving his sword in defiance against tyranny. He defended our home from evil (the neighbor’s chickens) and vanquished the enemy (bratty kid down the street). He learned to judge the character of a person by their actions. He realized heroes make mistakes and villains are often misunderstood. He became a rememberer of the Forgotten Realms and citizen of Faerun. He learned to read maps! And I was delighted.

He quickly exhausted my on-hand supply of Drizzt books and demanded we go to the bookstore. His widening eyes when he realized the vast treasury available to him in those stacks were glorious. My son is twenty-two now and revisits Faerun regularly. Of course, his reading  interests have expanded in the thirteen years since, but he’s never forgotten Drizzt, Bruenor, Cattie-Brie, Wulfgar, or Thibbledorf Pwent. They are as much his stalwart friends as they are each other’s. He has all my old paperback copies, kept in pride of place in his reading room bookshelves. I run my fingers along their cracked and mottled spines in silent thanks each time I visit. He purchased ebook versions for himself; Drizzt and his companions travel with him wherever his job takes him. Thanks to Salvatore’s creation, my son became a reader.

Salvatore is a pillar of modern fantasy fiction and his influence on fantasy can’t be overstated. For many, Drizzt & Co. led them to drink from the magical font when Tolkien was inaccessible. This was certainly the case for my son.

I can’t say the Drizzt books made me, but they certainly helped pave the way to adventure everlasting for my son. Which makes me a happy and satisfied mom. That counts, right?