Books That Made Me: Surface Detail, Iain Banks

Home » All Reviews » Books That Made Me: Surface Detail, Iain Banks

“The truth is not always useful, not always good. It’s like putting your faith in water. Yes, we need the rain, but too much can sweep you away in a flood and drown you. Like all great natural, elemental forces, the truth needs to be channeled, managed, controlled and intelligently, morally allocated.” 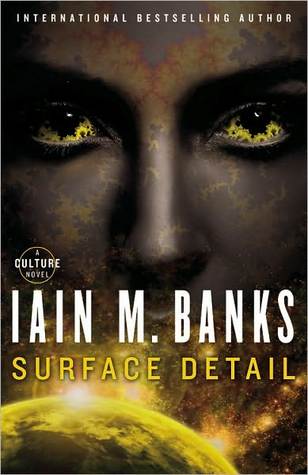 I grew up in a small suburb about an hour south from Perth, Western Australia. The Scholastic Fair was basically the only way to get new books without making the long trek into the city. But they were the golden years. Each year, new books would arrive with those crisp edges and that fresh book smell, hot off the press. Fill a room with them, and you’ve got a potent cocktail for core memories for a nine-year-old.

Harry Potter was, of course, one of the books that made me fall in love with fantasy, like many kids my age. I couldn’t get enough – reading book after book, and re-reading them several times. Hobb, Le Guin, Williams, and Rowling were my watchwords. But when I was a teenager, I wanted to be cool, and reading books was the polar opposite of that. I stopped reading entirely, and fell out of love with it, though I still consumed visual media. Nothing held my interest for more than a few minutes, and then I was on video games or tv again.

So you’d imagine a book that numbered in the hundreds of thousands of words and over 600 pages of science fiction, politics, and nuanced characters would be the last thing I’d be interested in. But I was given Surface Detail by a friend of the family, and from the first line, Banks just enraptured me. So many properties try to envision the future – be that cyberpunk dystopia, climate wars, apocalypse, but none captured my attention so much as the Culture. AIs with psychological issues, societal issues of today that had long been solved and basically forgotten, and huge space battles where one split second of inattention meant leaking out into space. Though I write fantasy, it was the book that inspired me to write stories of my own, because it couldn’t *not* fill my head with stories.

Without Surface Detail and Iain Banks, I don’t know that I would have ever fallen back in love with reading again. I almost certainly would never have written my own stories. So, thank you, Iain, to wherever you might be traveling in the universe.

NC Koussis was born in Perth in 1993 to Greek and Kamilaroi ancestry. He has moved all around Australia, settling in Newcastle for the moment, where he lives with his wife, son, and staffy dog, Nala. He’s been writing fantasy books since he was a little boy, after falling in love with Lord of the Rings and Harry Potter. He decided to publish a book in 2019, and it only took him three years. He considers himself an enthusiastic amateur of medieval history, historical battles and tactics, and food. When he’s not writing, he’s making sourdough bread and working on a PhD in neuroscience