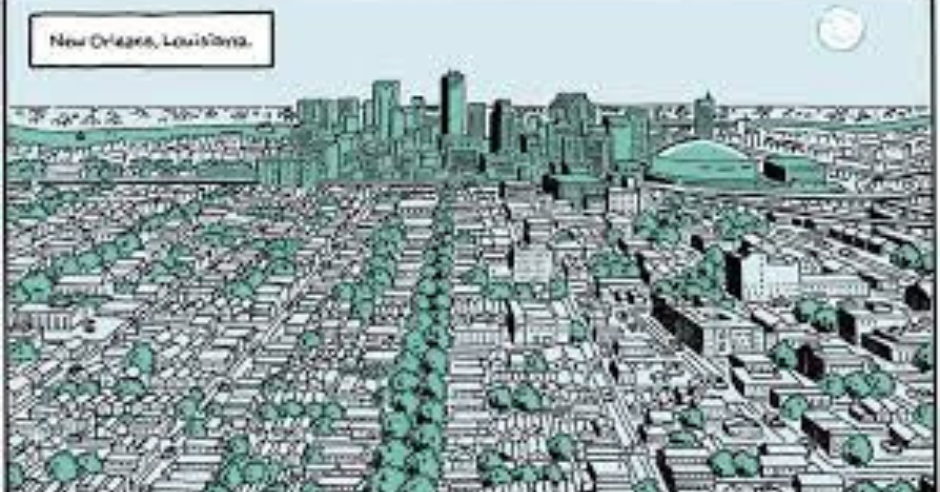 #Bookcook A.D New Orleans After the Deluge by Josh Neufeld

A stunning graphic novel that makes plain the undeniable horrors and humanity triggered by Hurricane Katrina in the true stories of six New Orleanians who survived the storm.

A.D. follows each of the six from the hours before Katrina struck to its horrific aftermath. Here is Denise, a sixth-generation New Orleanian who will experience the chaos of the Superdome; the Doctor, whose unscathed French Quarter home becomes a refuge for those not so lucky; Abbas and his friend Mansell, who face the storm from the roof of Abbas’s family-run market; Kwame, a pastor’s son whose young life will remain wildly unsettled well into the future; and Leo, a comic-book fan, and his girlfriend, Michelle, who will lose everything but each other. We watch as they make the wrenching decision between staying and evacuating. And we see them coping not only with the outcome of their own decisions but also with those made by politicians, police, and others like themselves–decisions that drastically affect their lives, but over which they have no control.

Overwhelming demand has propelled A.D. from its widely-read early Internet installments to this complete hardcover edition. Scheduled for publication on the fourth anniversary of the hurricane, it shines an uncanny light on the devastating truths and human triumphs of New Orleans after the deluge.

I think much like those who lived through 9/11 can remember where they were or what they were doing the moment the plane hit The World Trade Center, those who saw the heartbreaking images coming out of New Orleans and Biloxi also remember the time and place. I know I did. Both are significant watershed moments in American culture and history. For 9/11 it was the start of what has been deemed fear culture. For Katrina, it was a stark look at race and poverty relations in the US as well as knowing that American relief efforts can fail you. Despite best efforts to the contrary. It is hard things to talk about, and hard things to convey on paper. But as they say, a picture can tell a thousand words…This graphic novel certainly did.

“Seeing my books and comics was the hardest, it made me think that it would have been easier if a tornado simply hit the house and flung it to another city. At least then we wouldn’t have to walk atop the things I cared most about. “

A.D depicts seven different stories from seven different people and perspectives. Each experienced the hurricane firsthand in one way or another. Some stayed, some fled, some went to the Silverdome, and some rode it out on top of a convenience store. A single-story couldn’t tell a true tale about the people of New Orleans, but taken in aggregate, the reader definitely achieves a good understanding of what the city went through. It is both powerful and visceral and a tad unsettling.

I chose this story for this week’s #bookcook as an homage to New Orleans food and culture. New Orleans is a magical place and not the Disney version of magical. More like the dark side of magic. It is hot, overgrown, and mystical. The drums and jazz of the nightly music cause a constant throb that you feel not only in your bones, but in your soul. When you are there, you want to become a part of the culture and get swept away by it: Food, dancing, music, passion, and everything that whispers in a sultry tone of voice, “I am the south.”

To Read A.D New Orleans After the Deluge by Josh Neufeld

There is nothing that says, New Orleans, like a good gumbo. This recipe was taken from Big Oven

Melt 2 ounces of margarine in a large soup pot. Add chicken and saute until cooked halfway. Add sausage and vegetables and cook until vegetables are tender. Add chicken broth and seasonings and bring to a simmer. Make a black roux in a separate pan. Heat butter very hot and add flour. Turn heat down to medium. Stir frequently until the roux becomes very dark, almost black in color but not burnt. (This takes practice) Slowly alternate soup into roux and roux into soup whipping until thickened and smooth. Simmer for 30 minutes. Add shrimp and okra. Simmer until shrimp is cooked about 2 minutes. Remove from heat. Dissolve Gumbo file powder in water. Slowly stir into soup. Serve plain or with white rice