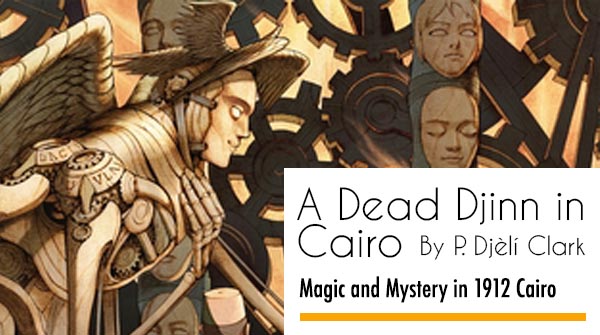 Book Review of A Dead Djinn in Cairo by P. Djeli Clark

“Quite dreadful. No one liked desk duty. It often seemed half their job was paperwork as it was. Who joined the Ministry for the thrill of filling out endless reports, in triplicate no less? Then again, he thought dismally, neither did they expect to spend their days haggling with government bureaucrats over haunted tram cars.”

A Dead Djinn in Cairo is the third story by P. Djèlí Clark that I have had the pleasure to read and review. In all three stories, Clark demonstrates a keen ability to tease out small details to the reader and build an evocative and confident story.

He manages to do all this within the confines of a short story. I think he is one of the best fantasy short story writers working today.

A Dead Djinn in Cairo is the tale of investigator Fatma el-Sha’arawi in 1912 steampunk Cairo. A confident, articulate, and intelligent detective tasked with the case of a dead djinn.

Why is the djinn dead?

What are the repercussions to the magical community?

What is Fatma’s part in all this?

All questions that get answered within a wildly atmospheric and richly detailed steampunk setting. There are flying machines, and streetcars, beautifully tailored suits, and a kickass female Nubian magic wielder named Siti.

A Dead Djinn in Cairo is an exciting addition to Clark’s catalog of already outstanding short stories and is definitely worth the read.

“Even now, you fail to grasp the strength of my conviction.” And with those last words, he plunged the three blades through his body—one stabbing into his chest, a second ripping apart the armor surrounding his heart, and a third sliding through the metallic links of his neck. Bright fluid like the blood of a star poured from the wounds. He swayed, then toppled to crash upon the ground and was still.

“Well, that was unexpected,” Siti remarked.””

My Review of The Black Gods Drums

My Review of The Haunting of Tram Car 015