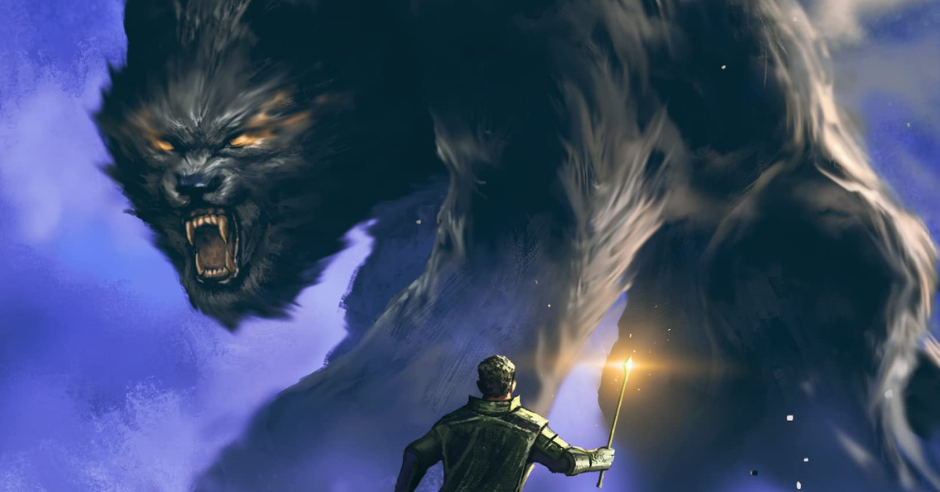 Shadow of a Dead God, Book One in Mennik Thorne, by Patrick Samphire was a book I read, on behalf of www.beforewegoblog.com as a scheduled stop of the author’s February 2022 book tour.
This in no way influenced the review of the book. I encourage readers to check out the other stops on the tour, and hear what the other bloggers have to say about this book, and its author. 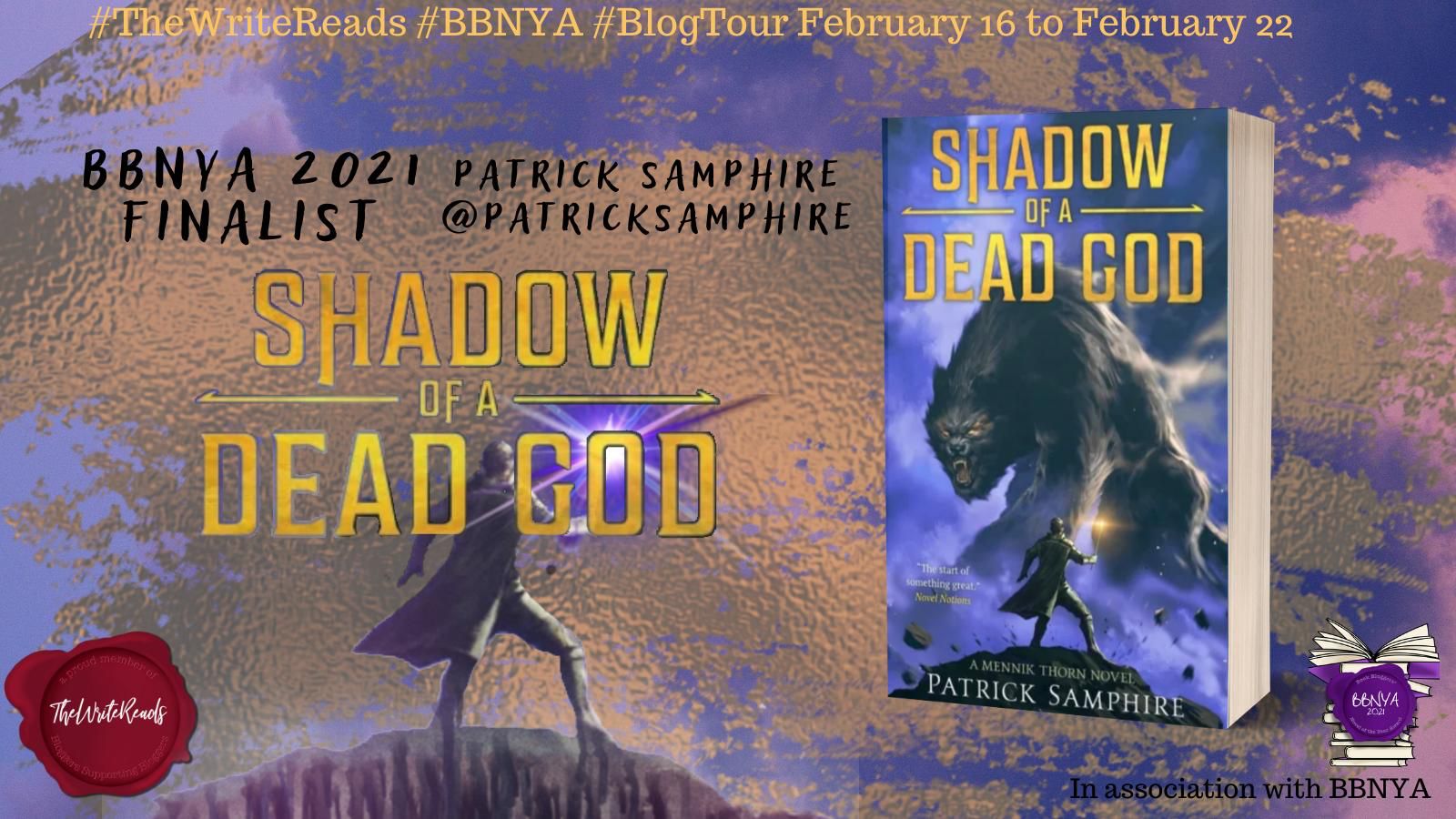 This book had already received quite a few accolades in the fantasy community, and was a finalist in the Self-Published Fantasy Blog-Off for 2020 (SPFBO#6), a finalist in the Book Bloggers’ Book of the Year Award (BBNYA) 2021, and was shortlisted for the Booknest Fantasy Award for Best Self-published Novel of 2020. What attracted me personally to the book was the fact that it advertised the concept of mages for hire, complicated and morally grey characters, and an engaging slow-burn read. I am pleased to report I found all three in this excellent book, and more.

“Ah, the glamorous life of a mage for hire.” 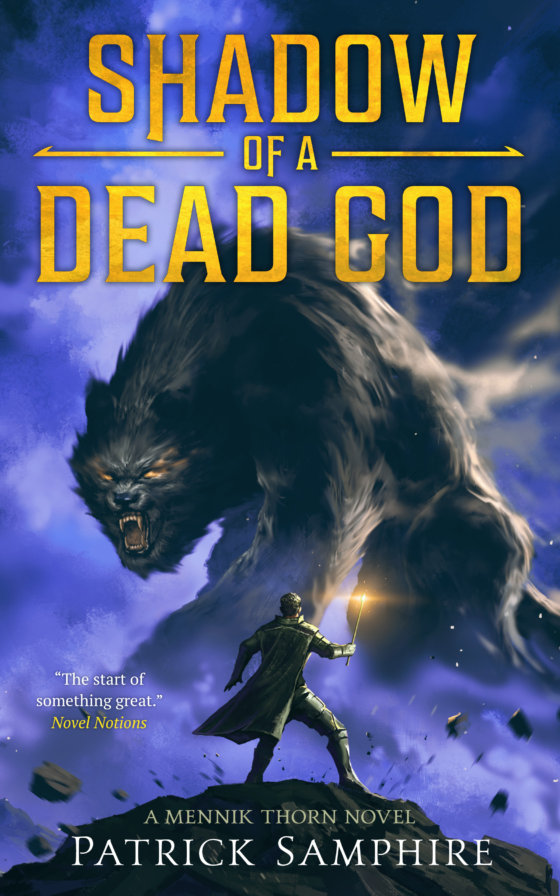 To me the book read like part epic fantasy, part murder-mystery, part heist-job thriller, and even part horror at times. Set in the shadowy coastal town of Agatos, Shadow of a Dead God follows the plight of the mage for hire, Mennik Thorne, otherwise known as “Nik”. Nik is not the typical all-powerful, cocky and self-assured magic wielder that grace the pages of many a fantasy book.
He is utterly lacking in self-assurance, completely indecisive, anxious, self-effacing, and traumatized from his previous experiences as a mage on a higher level. Nik is also in desperate need of funds. While he is essentially a good person, as we all know, despair can drive people to do certain things they otherwise might not have. A down-on-his-luck person with magical abilities who might be willing to do anything to survive is a potential recipe for disaster. Bring it on!
The story opens with Nik doing ridiculous work for a snobby client who thinks Nik is far beneath her. But beggars can’t be choosers. Nik is not pleased with his current lot that has brought him to this pass, but he has little choice. Still, even with the unsavoury odd-job employment status, Nik is certainly not seeking adventure. But that “might be willing to do anything to survive” offer arrives at his doorstep in the form of his old friend Benny.
Within a few lines of Benny’s arrival, as the reader you just know that association with Benny is going to be a bad thing. He’s that kind of friend that always has you stepping in it, but you love them, feel sorry for them, and feel obligated to them, so you go along anyway. Immeasurably bad idea.
Because Benny is a thief, and he wants Nik to help him break into the domain of a high mage, and steal a business ledger. It was his affiliation with the powerful and dangerous high mages that traumatized Nik in the first place, so one can imagine he greets this task with less than enthusiasm. But he owes Benny, and does not want to lose his friend, so against his better judgment, off they go on the obviously ill-fated job.
The break-in into the flower-covered palace of the high mage goes horribly wrong, a master servant dies in the process, and subsequently the blame for the murder falls squarely on the shoulders of the hapless Nik and Benny. Nik must use his wits, his magic, and summon what bravery he wasn’t certain he possessed, to clear their names, and stay alive.
I absolutely loved the characters in Shadow of a Dead God, and well-developed characters will always be the most important aspect of any book for me. I also love first-person narratives, and this book had that too! The unreliability as a narrator of the innately decent, modest, unsure, yet snarky and hilarious Nik, was just my jam. He is an easy character to root for.
But Benny was by far my favourite, and he was a scene-stealer for sure! He’s a complete hot mess, and it was glorious! He is in complete denial of his crimes, and willing to call in favours from any corner, blackmailing or guilt-tripping his friends, and all the while looking to make that next buck. I truly enjoyed the banter between Nik and Benny, and their odd friendship and caring for one another was the highlight of the book for me. And I must say something here about Benny’s eleven-year-old daughter, Sereh. She’s young, but freakishly powerful, and downright scary. A truly fascinating character! Exceptional job by Samphire in drawing these characters.
The worldbuilding and magic system was very well done. Agatos is a dark and gritty place, filled with mysterious creatures, magic, and divided by social status and unique customs and language, that was easy to envision thanks to Samphire’s deft and descriptive writing. The best part of these elements for me was the dreaded and mystifying Ash-Guard, who hunts and kills mages. And the concept of having the main power source for mages originating from the rotting corpses of dead gods, was original and fascinating.
While a fair length at around 470 pages, the book was extremely well-paced, and I could not put it down for long, wanting to get back to the action. Yet it still had those quiet and reflective moments I crave in fiction, where I can just soak up the imagery and enjoy those enlightening conversations between characters that can become so memorable. Samphire is clearly a fan of the witty, ironic dialogue and exposition, and it worked just right for me in this book. Believe me, sometimes it doesn’t hit the mark for me in other books, but of course that is completely individual reader preference. Ultimately, this was a book that makes one go to the author’s profile on Goodreads and add all their books to one’s TBR (which is exactly what I did after I finished The Shadow of a Dead God).
Five stars for The Shadow of A Dead God, which was an exceptional book that has surely sold me on picking up the sequel, entitled Nectar for the God!