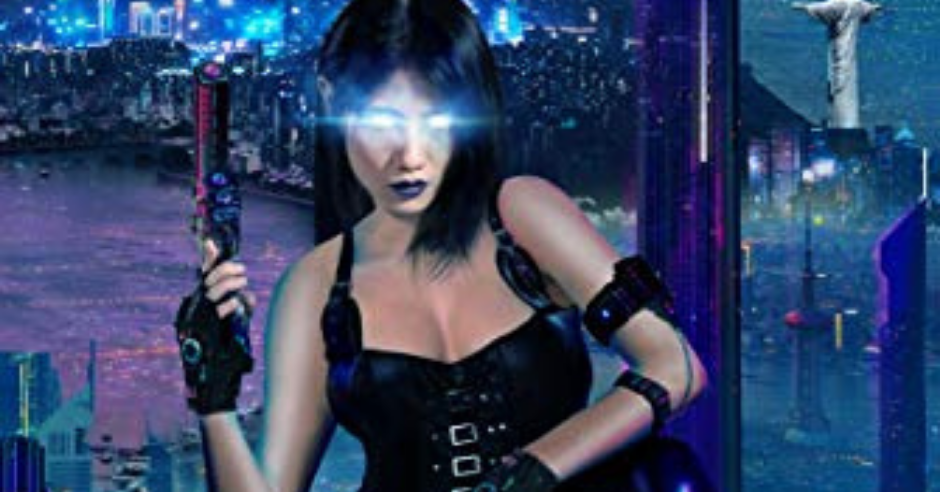 By Beth TablerSeptember 10, 2021No Comments

I was a huge fan of BEHIND BLUE EYES by Anna Mocikat, which was a breath of fresh air in the cyberpunk genre. The cyberpunk genre has had a recent revival with the successful Netflix adaptation of the Altered Carbon books by Richard K. Morgan as well as the semi-successful release of Cyberpunk 2077 by CD Projekt Red.

So I was in the mood for something full of action, twists, turns, and world-building that Behind Blue Eyes provided in spades. A warning before I proceed that this review will contain spoilers for the ending of the book as its otherwise hard to talk about the sequel. Right? You have been warned.

FALLEN ANGELS picks up after the events of the first book with Nephilim having been captured, brainwashed, and restored to “factory default.” Metatron, her master, has also promoted her as well as made her his lover as a way of displaying the full length of his control over her. As an Archangel, leader of the cyborg Guardian Angel death squad, Nephilim is seemingly content with the very life that repelled her in the previous book. Indeed, she’s actually helping Metatron plot against the corrupt Olympias board of directors that rules rules all of the Western Hemisphere.

These plans hit a snag, though, when someone starts murdering Guardian Angels. They are found spread throughout the city, gutted like fish, and it becomes an equivalent of Seven. The actual lives lost are immaterial to Metatron, though, because he’s not concerned about his brainwashed slaves. No, it’s the fact that it is exposing the Guardian Angels as vulnerable to being killed. Without the illusion of invulnerability, the Guardian Angels do not have nearly the power they need to mount his coup that Metatron is planning.

This book does a great job of fleshing out the world that was previously mostly seen through Nephilim’s propgaanda-influenced eyes. We get to see Eastern Europe under the control of the Robsum Corporation where romantic interest Jake has been forced to retreat despite his love of Nephilim. We also get a sense of how Brazil has been changed under megacorporation control. I always like these kind of details and the discussion of the various methods that the populace is being kept in line.

The best part of this book is definitely the introduction of police officers, Shiro and Spider. These two are “ordinary” citizens of Olympias City and provide another perspective on the Guardian Angels as well as Olympias Corporation. I really enjoyed watching them play off one another and think they would make a pretty good pair of protagonists for a cyberpunk police procedural series. Too bad they’re in a series where a bunch of Weapon X supersoldiers are capable of slashing through small armies.

In conclusion, I really enjoyed this book. It is full of action, twists, turns, and psychological examinations of the main character. I feel bad that Nephilim remains brainwashed for much of the book, especially since Metatron pretends he’s in love with her. However, I think that is part of the story to Nephilim finally turning on and getting her revenge on him. This is a great book and available to all Kindle Unlimited users for free.