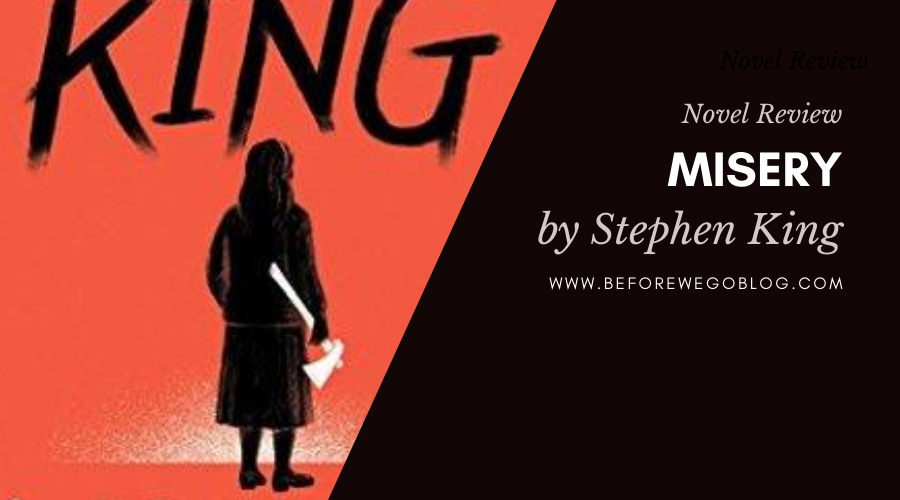 By Beth TablerOctober 10, 2020No Comments
Review

"I am your number one fan."

There may be fairies, there may be elves, but God helps those who help themselves.-

The #1 national bestseller about a famous novelist held hostage by his “number one fan” and suffering a frightening case of writer’s block—that could prove fatal. One of “Stephen King’s best…genuinely scary” (USA TODAY).

Paul Sheldon is a bestselling novelist who has finally met his number one fan. Her name is Annie Wilkes, and she is more than a rabid reader—she is Paul’s nurse, tending his shattered body after an automobile accident. But she is also furious that the author has killed off her favorite character in his latest book. Annie becomes his captor, keeping him prisoner in her isolated house.

Annie wants Paul to write a book that brings Misery back to life—just for her. She has a lot of ways to spur him on. One is a needle. Another is an axe. And if they don’t work, she can get really nasty.

Misery by Stephen King is a novel about pain, obsession, and writing. Paul Sheldon, the stories protagonist, is 42. He is a celebrity writer, twice married and divorced, drinker and smoker, and he is in a lot of trouble. So much trouble.

It was awful, Paul begged and pleaded to be left alone. But Annie couldn’t leave him alone.

This was Paul’s introduction to Annie Wilkes, Paul’s number one fan, the stories antagonist and Paul was in a lot of trouble.

Paul was out celebrating the finishing of his newest novel. “Fast Cars.” A story that Paul had written after putting behind him his best-selling romance series staring the heroine Misery Chastain. A story that, to him, was not writterly and deserving of praise. He had drunk champagne, high on the excitement of the victory, and went driving.

He crashed his car spectacularly on a snowy road outside Sidewinder, Colorado.

A place that many King fans will recognize from Dr. Sleep, American Vampire, and The Shining. He is found broken and twisted amongst the remains of his car by Annie Wilkes. His legs are a badly broken puzzle of bone shards and pain. He awakes in Annie’s farm somewhere outside of Sidewinder with only the sounds from an unhappy cow and a pig that Annie had named Misery to greet him.

“This memory circled and circled, maddening, like a sluggish fly. He groped for whatever it might mean, but for a long time the sounds interrupted. fayunnnn red everrrrrythinggg umberrrrr whunnnn Sometimes the sounds stopped. Sometimes he stopped”

Paul realizes that his legs are a broken and splintered mess pretty quickly. Ironic because Annie is an ex-nurse and probably could have set them to rights. He is in excruciating pain and hooked on pain killers, and is entirely at the mercy of his number one fan, and something is not quite right with her.

There is something diabolical and insane in Annie Wilkes. Something dark is inside her mind and only comes out sometimes, something that can hurt him, something that will eventually kill him. If he wants to continue his existence, he needs to write a new Misery novel for her, one that revives the protagonist Misery Chastain. Misery is a character that Paul was delighted to kill off and be done with. Otherwise, Annie might kill him; but she might kill him anyway piece by piece.

When Paul is found to be investigating the farmhouse while Annie is out, Annie decides that he needs to be punished, so she cuts his foot off with an ax and cauterizes the stump with a blow torch. It is brutally efficient, and in its way, Annie thinks she is weirdly kind. She gives Paul a pain killer and a slight sedative beforehand. Much like grounding a wayward child for being naughty, Annie feels she needs to punish Paul. Although her punishment is violent and cruel, she doesn’t know it.

Misery is a spectacularly cruel novel, and it goes beyond the usual horror that we can expect from King. This novel touches on the psychological horror and self-flagellation of a writer. Paul must create a story that he does not want to tell, then the story takes ahold of him as he begins to tell it, and he must see it to the end. Annie is both a jailer, muse and finally the ultimate critic. She punishes failures by cutting off pieces of him. Deadlines and writerly problems take on whole new meanings for Paul.

The ending is almost anti-climatic. As a reader, I want fire and brimstone to fall upon Annie. She deserves so much comeuppance. But I think the way that King handled it is perfect. A battle between writer and critic needs to happen, and the struggle between jailer and inmate needs to happen.

“It was always the same, always the same-like toiling uphill through jungle and breaking out to a clearing at the top after months of hell only to discover nothing more rewarding than a view of a freeway – with a few gas stations and bowling alleys thrown in for good behavior, or something.”

And, as King says here, writers plod through, whip themselves, battle their muses, and in the end, it is anti-climactic – a bowling alley and gas station. It is not satisfying, but the ending is right. It is terrifying for Paul and quite disturbing as a metaphor for writing.

Misery is King writing at his finest and possibly most introspective. It is, at times, a painful and terrifying read. I had to put it down a few times to take a breath, pet a dog, and watch some happy youtube video. But it is worth the read, and I am so glad I took it on.