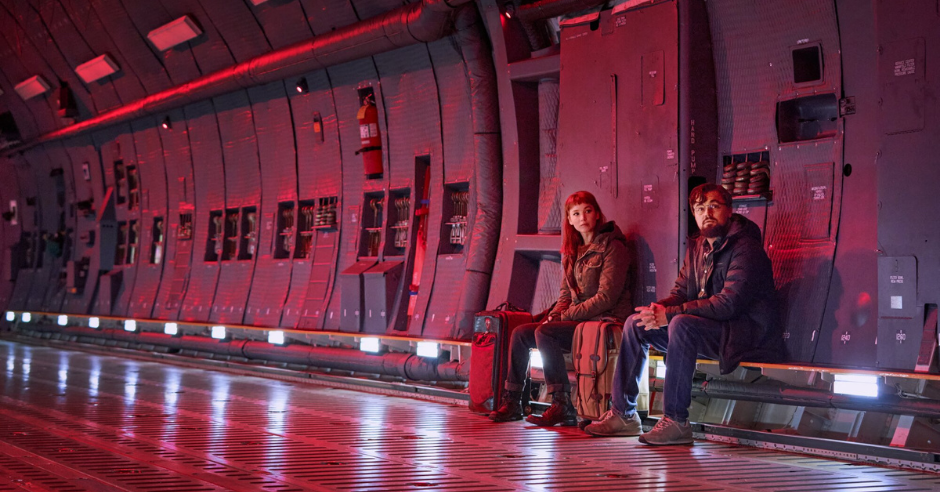 By Bjørn LarssenJanuary 6, 2022No Comments

CHEERS TO THE END OF THE WORLD

“Maybe we are not meant to enjoy screwball things. Maybe the destruction of Earth is supposed to be hellishly unfunny.”

‘A disastrous movie, Don’t Look Up shows McKay as the most out of touch he’s ever been with what is clever, or how to get his audience to care.’

This is the gist of Nick Allen’s review of the star-studded Netflix production at rogerebert.com. ‘It’s almost irrelevant that this is McKay’s worst film yet,’ he continues (tell me how you really feel, Nick?) “Don’t Look Up thinks it’s pushing many savvy political buttons, when it’s only pointing out the obvious and the easy, over and over.”

You’re totally right, Nick. This movie is not supposed to be ‘clever.’ It keeps pointing out the obvious, over and over, from all sorts of different angles, and you still managed to miss it. Which might be because you’re a part of the problem.

In Mr Allen’s (and many, many other critics) defense, the movie is advertised by Netflix as a comedy.‘Salon says it is “farcical, sluggish when it could be screwball” and wishes it had been “more fun.” Parade calls it “shrill.” ABC News (Australia) says the director “doesn’t know how to let people enjoy things.”’ (Nathan J Robinson, Current Affairs)

‘“Keep it light, fun,” the fictional scientists are exhorted, before discussing imminent extinction on a morning TV show, which is an accurate, non-exaggerated representation of how morning TV shows work. “Couldn’t it have been more light, fun?” is a fair summary, by coincidence, of the advice for McKay from detractors’ – points out Catherine Bennett in The Guardian.

Don’t Look Up is exactly what its makers intended. They anticipated this sort of criticism – in fact, the movie pre-emptively answered it. ’Maybe the destruction of the entire planet isn’t supposed to be fun,’ Kate Dibiaski (Jennifer Lawrence) says. ‘Maybe it’s supposed to be terrifying.’

The critics are reviewing a movie – pacing, humour, cast. Few of them realise they are watching a fictionalised documentary along the lines of The Social Dilemma. I suppose it’s hard to notice that what you are watching is reality when it has Meryl Streep, Leonardo DiCaprio, Jennifer Lawrence, Cate Blanchett, etc. in it, and you are a critic tasked with reviewing a comedy and it’s ‘hellishly unfunny’ (Polygon’s Joshua Rivera).

Maybe we are not meant to enjoy screwball things. Maybe the destruction of Earth is supposed to be hellishly unfunny.

Adam McKay in an interview for LA Times remarks: ‘I was talking to a friend of mine — journalist David Sirota, who is also a speechwriter for Bernie Sanders — about how tepid and anaemic a lot of the mainstream media’s coverage of the climate crisis is.

He said, “Yeah, it’s like an asteroid is going to hit Earth and no one cares.”’

The production had to be stopped because of the Covid pandemic. The humanity seemed to take this as a challenge – how do we make this movie look too realistic and understated? When the production resumed, the movie needed to be made ‘20 percent crazier, because reality had played out crazier than the script.’

When Donald Trump, the actual President of the United States mused ‘[bleach] knocks it out in one minute. One minute. And is there a way we can do something like that, by injection inside or almost a cleaning?’ he made Meryl Streep’s President Orlean look overeducated and boringly sane.

‘Nothing I had in the script was that crazy,” McKay said, ‘so I added more comet denial.’ Adam, it’s 2022 and we’re still surrounded by Covid denialists, including ones who spent days in ICU as they were no longer able to breathe by themselves. Was ‘more denial’ the worst you could do? (Depressing answer: in comparison with reality? Yes.)

President Orlean manages to convince her voters to literally not look up, mocking up ‘the look-uppers” who ‘don’t focus on the road ahead’ – and it works. Until someone does look up by accident and goes ‘hooold on a second…’ and that is kind of funny in the way the ‘it’s funny ‘cause it’s true’ meme is funny.

(There are two extra scenes mid-credits and after the credits. They’re funny in the way Dr Strangelove is funny.)

The sad genius on display is that the only unrealistic bits of the movie are its special effects.

When President Janie Orlean realises she must rapidly distract the voters from a scandal involving a Supreme Court nominee’s sexual past (obviously unrealistic – needed more sexual abuse, but light and funny) she decides that destroying the comet should boost her poll numbers.

She is right. At incredible speed, the amazing nation of America produces both the capable nuclear weapons and a hero – you know, as if it were an action comedy. Inexplicably, though, there is still more than half of the movie left.

That’s unsettling. I mean, how long can the credits be?

Peter Isherwell, a tech billionaire whose half-inane speeches are completely different from those of the universally acclaimed genius Elon Musk, proposes a simple solution. His company, BASH, will build drones that will break the comet into smaller, easily manageable trillion-dollar chunks, thus ensuring that BASH will be able to produce metric fucktons of smartphones for eternity. America will become richer. Everyone will become richer. Everyone will win.

Scott Adams, the creator of Dilbert, proposes a simple solution to climate crisis in his book Loserthink: ‘Understanding that a dollar today is worth far more than a dollar in the future, would you spend $1 trillion today addressing, let’s say, climate change, to avoid losing $10 trillion in GDP over the next eighty years? […] If climate change were the only risk in our dangerous world, then yes, it would be rational to spend—and even overspend—to bring the risk of human extinction to zero.

But we live in a dangerous world, with lots of mortal risks. Would we be better off putting that $1 trillion into an asteroid early-warning system, complete with nuclear missiles that could move the asteroids off course if we detect them early enough?’

I’m not making this shit up.

You can’t make this shit up.

‘This might have been great fun if it had been executed with some respect for our intelligence,’ sighs Wall Street Journal’s Joe Morgenstern.

Maybe Wall Street Journal doesn’t like being reminded of the role it plays in it. Because when Morgenstern says ‘our intelligence’ he pretends to mean that of the audience, where Don’t Look Up is about the power of the media he represents and how the media chooses to use it.

Maybe it was never supposed to be great fun.

The critics deemed the movie ‘heavy handed’ and ‘toothless.’ A gentler approach was needed for people to ‘notice,’ to look up. Because that’s been totally working for decades now.

When Kate Dibiasky tries to hide from her unwanted newfound fame as ‘the we’re all gonna die lady’ meme, her parents don’t want to let her into their house. ‘No politics,’ her father says sharply. ‘We’re for the jobs the comet will create,’ her mother adds, apologetic. Her ex-boyfriend already started writing a book about their relationship, called My Brush With The Devil. Dr. Mindy (Leonardo DiCaprio) is busy arguing with comet deniers on Twitter.

Dan Patrick, Texas’ Republican lieutenant governor, mourned in March 2020 that ‘no one reached out to me and said, “As a senior citizen, are you willing to take a chance on your survival in exchange for keeping the America that America loves for its children and grandchildren?” And if that is the exchange, I’m all in. […] I just think there are lots of grandparents out there in this country like me – I have six grandchildren – that’s what we all care about.’ ‘That,’ which he was referring to, was the economy.

Dr. Oglethorpe told Kate and Dr. Mindy that the US refused to share the spoils (i.e. minerals extracted from the comet) with Russia, China, and India, who decided to build their own nuclear fleet in hopes of destroying the comet. In an American action comedy this sort of effort must fail, and inevitably it does. In an American action comedy the hero and his proper, working much better, much larger red button-steered nuclear fleet would depart now. We’re way past that point, though, having missed our chance 55 minutes in.

Can you keep up which of those bits are a comedy and which were actually said in the so-called real world – and which feel more heavy handed? (Not sure about ‘toothless.’)

Don’t Look Up actually could have been heavy handed. It could have been The Message for the Sheeple to Wake Up. McKay and Sirota very carefully constructed a masterpiece that avoids this trap. When a critic huffs at the unnecessity of Timothée Chalamet’s character, I know that he’s in the movie to attract his fans. So are Ariana Grande and Scott ‘Kid Cudi’ Mescudi – so are Meryl Streep and Tyler Perry – so are Leonardo DiCaprio and Jennifer Lawrence. As American-centric as the movie (and America, like, the real one) is, the casting, special effects, plot twists have been designed to appeal to as many demographics as possible – in order to show us a really expensive mirror we can’t help but look into.

If only Don’t Look Up actually were a comedy.

The American hero would save the world in the last minute. Ideally it should be stoner Kate, mercilessly bullied, laughed at, mistreated throughout the movie, together with her ‘eh, why not’ boyfriend Yule (Chalamet). Shaking with nerves, Kate would press the (big, red, and very functional) buttons on US nuclear console as a giant clock counted down to 0:01 and at that very moment Yule would save everything and everyone by tripping over a cable.

President Orlean would deservedly choke on champagne. Her son (totally unrealistic – it’s not like Jared Kushner ever became a senior White House advisor) could, for instance, get electrocuted by that cable, or hit by a very small chunk of the comet that Kate’s magical weapons failed to destroy. The evil billionaire would get his comeuppance – bankruptcy, for instance.

The movie’s tagline is flat – ‘based on truly possible events.’ The real one, articulated first by Kate, then by Dr. Mindy, is WE’RE ALL GOING TO DIE, and the shrill and sluggish production won’t even let people enjoy it.

Check Out Some of Our Other Articles

REVIEW – We Men of Ash and Shadow by H.L.Tinsley

Bjørn has a degree in mathematics and has worked as a graphic designer, a model, a bartender, and a blacksmith (not all at the same time). His hobbies include sitting by open fires, dressing like an extra from Vikings, installing operating systems, and dreaming about living in a log cabin in the north of Iceland. He owns one (1) husband and is owned by one (1) neighbourhood cat.