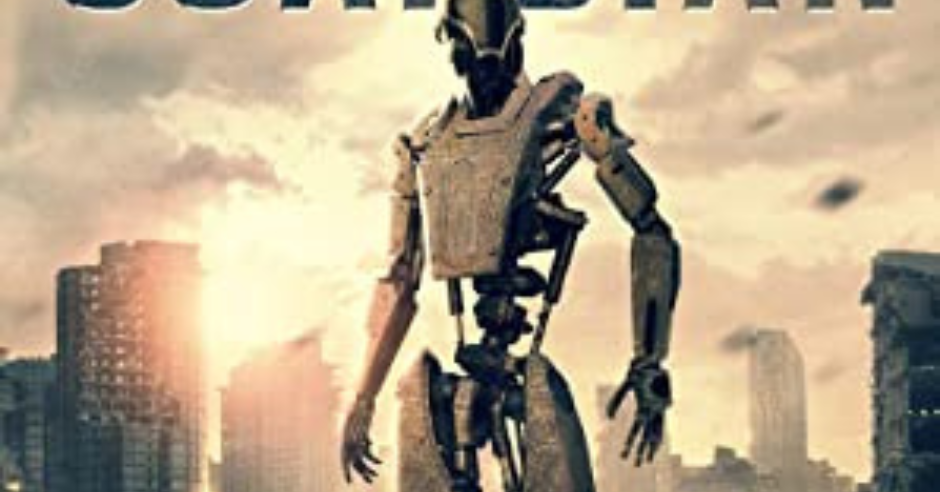 Can a gentle robot win the fight for humanity’s last hope?

I love stories that transport us to interesting new worlds where characters face hardship. For me, the point of fiction is to see how the characters react. How does our protagonist solve the problem, and what would I do in their place? One of my favorite books is Ray Bradbury’s Fahrenheit 451. It’s fascinating to imagine a world where books are not only burned, but your job is to set them ablaze. The unfolding of events within this dystopian society is endlessly fascinating to me.

I was a late bloomer with reading (among other things like riding bikes and swimming). But when the hamster wheel in my brain clicked, I gobbled up every book I could set my hand on from Stephen King to Ray Bradbury, Frank Herbert to Judy Blume. Loving books so much inspired me to want to write, I suppose. My family instilled a hard work ethic in me, but they wanted me to go a traditional route—law, science, corporate, or government jobs. I only realized later in life that writing books could lead to a career. It wasn’t until Amazon made it easy to publish books on their platform that I got interested in pursuing a writing path.

The theme comes first. I like to ask “what if” questions. Steel Guardian was inspired by asking, what if a robot had to take care of a baby? Once I land on a theme, then the protagonist and antagonist(s) surface. I work hard on giving the characters interesting traits and meaningful goals. The last thing I work on is an outline of the plot.

I was thrilled to be in the first SPSFC and to place as a finalist! The most amazing part was having so many judges reading the books. Each judge or judging group posted reviews on their websites, and several of them left reviews on Amazon and Goodreads. Feedback on the story is like gold to me. I was most pleased about getting the book into the hands of new readers. I would definitely submit books in future SPSFC contests.

Having Steel Guardian read by judges who truly appreciate science fiction and fantasy. Many of the reviews have inspired me in new ways with new ideas for future books and series. It’s been a blast to connect with the other SPSFC finalists too!

Steel Guardian asks, “What if a robot had to take care of a baby?” Block is a simple hotel CleanerBot model and flees Chicago after the AI Apocalypse. All Block wants to do is clean and find a new hotel where he can do his job, but he stumbles upon an abandoned baby. His programming compels him to take the child somewhere safe and find a human who is worthy. Along the way, he meets a human named Nova, who forms an unlikely alliance with him. Together, they face mortal danger from bands of scavengers, militaristic SoldierBots, and Combat Mechs. A cyborg Bounty Hunter will stop at nothing to find Block and the child – an infant who holds the key to humanity’s future.

My niece, Hannah, was born around the time I was thinking about the robot and baby question. She was absolutely adorable and became my muse for the baby that Block takes care of. I dedicated the book to her. I grew up loving post-apoc literature and films such as The Stand, Mad Max, and Oryx and Crake, so I wanted to combine the gritty, survivalist world with that of a timid robot who’s trying to stay alive in a scary world with scary, militarized robots.

The beginning sequence was challenging. I wanted to set the stage with some worldbuilding and establish Block as the protagonist. I worried about him being a robot. Would he be relatable? There’s a turn of events that happens early in the book that some people dislike. When I started writing, it wasn’t planned that way, but that’s the way the story came out as I was writing. My only hope is that people keep reading because there’s so much goodness among the post-apoc mayhem in not only Steel Guardian, but the rest of the series too.

I reworked the ending a few times to make it more unpredictable. I’m thankful for having had a great editorial team who suggested the finale needed more oomph.

Working out Block’s energy source was a rabbit hole. I discovered real-life research about microbial-powered batteries. Some bacteria produce their own electricity, which could make them useful in batteries and fuel cells. They haven’t found a scalable way to harness this yet, but I extrapolated and decided that Block would consume gas, oil, grease—all the leftover toxic stuff that won’t go away on its own.

There are two more books currently published in the Rusted Wasteland series: Steel Defender and Steel Protector. Both books introduce a new crew of robot allies and enemies. I’m writing Book 4 and am having so much fun creating the next adventure for Block. If you’d like to keep up to date on news about the series, you can subscribe to my email newsletter, where I send updates out once or twice a month. Sign up at: https://cameroncoral.com/sign-up/