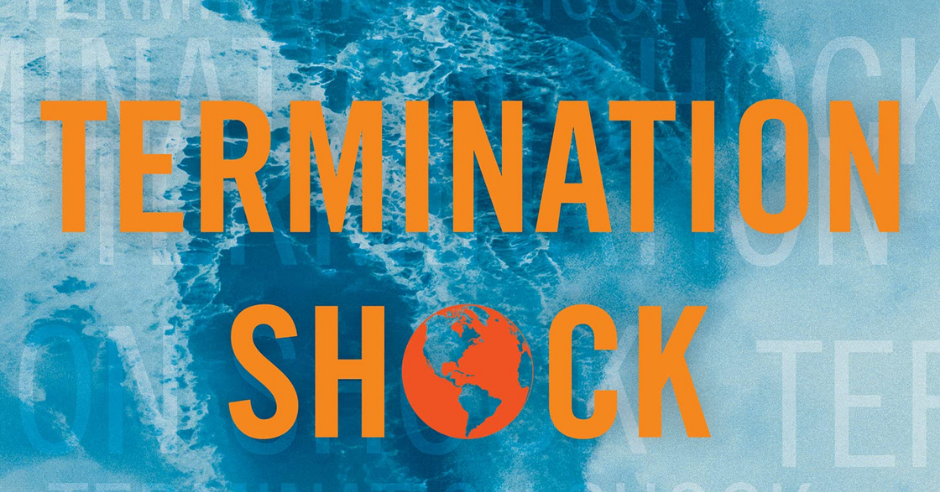 Neal Stephenson “…The title refers to a hypothetical catastrophe that could happen in a case where someone intervened in the climate but then stopped doing so, causing the climate to snap back suddenly to what it would have been without the intervention. In my story, a rogue billionaire takes unilateral action to intervene in the climate by using a stratospheric veil to bounce back part of the sun’s energy and cool the planet. This is already a fait accompli at the beginning of the book and so most of it is about the geopolitical reaction to what this man has done. Some people are in favor of the intervention, others opposed, depending how it alters the climate of their part of the world….”

Thirty-odd years ago, Neal Stephenson changed science fiction forever with his novel, Snow Crash. The language used in the story such as Avatar representing the human form used online, or Metaverse as an online virtual environment, are still used today.

Furthermore, aside from its influence on computer culture, many lovers of science fiction, myself included, got their start in the genre with Snow Crash. We were moved by both the fantastical nature, the Sumerian language as a programming language, and the plausibility of Snow Crash, mega-corporations battling it out. We have since moved on to one of Stephenson’s other many and varied science fiction novels. Ones that span a wide range of subjects, from rampant nano-technology to the preservation of Homo Sapiens. In essence, there are books for every type of reader in his catalog.

Stephenson released his latest novel, Termination Shock, on November 16th. It takes on climate change as a global and very present challenge to the human race. One whose rampant effects reach every part of the globe. He paints a very plausible and well-researched picture as always. He was kind enough to take some time to answer some of our questions regarding his past writing, science, technology, climate change, and his newest novel.

[BWG] You come from a family of scientists. Did this have a direct impact on how you interpret the world? Or, did you find your way into science, and by extension, speculative and science fiction on a different path?

When you’re a kid, you think that where you grow up is normal. Not until you leave home and see how other people live do you come to understand that “normal” is different for everyone. So for me “normal” was living surrounded by scientists and engineers, both in my family and in the town where I grew up–which was dominated by a science and technology university. This definitely shaped the way I think about things to this day, I’m an empirical scientific rationalist to the core.

[BWG] You were on Obama and Bill Gates’s summer reading list, which is a spectacular honor. What was that like for you?

That news didn’t hit until a few months after the book came out and so it was kind of a slow realization–by that point I was absorbed in another project and wasn’t really tracking day-to-day events related to the previous book. When it sunk in it felt a bit surreal. You have to keep in mind that writers just basically sit at home minding their own business most of the time and so there’s no overt hoopla around these things. No one shows up at your door with a brass band. It’s just more pixels on a screen.

[BWG] Are there any “geek culture” things that excite you? Are you a fan of any of the franchises or series out there?

The overall megatrend–which is so slow and relentless that it’s easy to lose sight of–is the way that geek culture has come to dominate popular culture to an extent that the fandom of, say, the 1960s could never have dreamed of. No one, even as recently as a couple of decades ago, could have anticipated the ascendancy of Marvel Comics Universe or of video games as cultural phenomena.

I have a soft spot for anyone who is trying to break new creative ground, and am grumpy when I see old things being rebooted. Mostly that’s because I’m thinking about the decision-making process within studios that leads to such projects being funded.

[BWG] It has been 30+ years since you wrote The Big U. Obviously, the publishing side of writing is vastly different, but has your story creation process changed between The Big U and now Termination Shock?

The big change is just having enough word count under my belt that I’m able to generate higher quality first draft copy and not have to spend as much time going back over what I wrote and fixing rookie mistakes.

[BWG] I watched a video from 2006 where you talked about your process of writing. You started with a pen, writing longhand. Do you write with a pen still? What about writing with a pen helps your creative process? Do you have a favorite pen type?

To the previous point, writing longhand (which, yes, I still do) generates higher quality first draft copy because it’s slower. It’s also just more flexible for editing, I can cross a word out faster than I can select it with the mouse and hit “backspace.” I use a few different pens and inks, no particular preference. I rotate pen and ink color from one day to the next so I can see where the breaks happened. I use finer nibs and different colors for editing.

[BWG] In the vein of the form versus function argument, are your books created first around a central idea, such as the moon exploding, then fleshed out with a narrative and characters. Or, do you have an idea of characters first and a basic storyline that you then insert a broader central idea into it?

It can go either way, but the key thing is that you have to have a yarn. A good story you can tell. There are multiple ways to get there and so for me the answer is different with every book.

[BWG] Are you tired of dystopias? Do current dystopias in film and books serve the same social purpose as dystopias did in classic science fiction?

I first realized that dystopias had jumped the shark a number of years ago when I was browsing for something to watch on Apple TV and saw a whole category devoted to “future dystopias.”

It’s a storytelling technique that can be consciously applied in a number of different ways. Probably the best known example in my work is the Cap’n Crunch digression in Cryptonomicon. While on one level it’s a complete digression from the ostensible plot of the book, it does convey information about how this character perceives the world, and helps to set a scene in a concrete and almost palpable way.

In other cases, such digressions can be used to set the stage for future events in the plot. If you learn a little about the physics and engineering behind what is going on in the story, you’re primed for developments that may come along a few pages or chapters later.

[BWG] Speaking of tangential asides, do you have a favorite rabbit hole you dove into for any of your books?

I have a soft spot for the wisdom tooth extraction bit in Cryptonomicon.

[BWG] There is a tradition in early science fiction to be predictive. For instance, 2001: A Space Odyssey predicted Face Time, Fahrenheit 451 predicted earbuds, and Neuromancer predicted the internet. Due to the speed at which technology is changing, is expecting a science fiction writer to predict where science and technology are going now an impossibility?

It’s generally not about prediction. It’s talking about the present through the lens of an imagined future that will probably never happen.

[BWG] You have a new book coming out this month, Termination Shock. Could you tell us a bit about it?

The title refers to a hypothetical catastrophe that could happen in a case where someone intervened in the climate but then stopped doing so, causing the climate to snap back suddenly to what it would have been without the intervention. In my story, a rogue billionaire takes unilateral action to intervene in the climate by using a stratospheric veil to bounce back part of the sun’s energy and cool the planet. This is already a fait accompli at the beginning of the book and so most of it is about the geopolitical reaction to what this man has done. Some people are in favor of the intervention, others opposed, depending how it alters the climate of their part of the world.

[BWG] People talk about climate change through a political framework. Was it challenging to write a story that toes the line between the two polarized sides?

The answer to that problem is to show realistic characters having realistic arguments about it–which is what would actually happen!

[BWG] Individuals tend to boil down climate change down to a simple idea when it is not. Is it possible to have useful conversations regarding this issue? Is it a problem caused by social media and shortening attention spans?

The world’s reaction to COVID–which unfolded as I was writing this book–showed us that it’s impossible to get many people to believe in the existence of a disease that is placing them and their loved ones in immediate danger and causing hundreds of thousands of people to drop dead all around them. Trying to communicate about human-caused climate change is far more difficult than that, given that the consequences are mostly far away and detectable only by scientific instruments and statistical analysis. It would be difficult to get people to understand these facts even if social media weren’t pouring highly optimized disinformation into their heads.

[BWG] One of the main plot points of Termination Shock is the idea of a rogue person doing a significant geoengineering event. It seems like this type of scenario is the only way we will get something done?

The time will probably come when some country, somewhere, will make the determination that it’s in their national self-interest to intervene in the climate through geoengineering. At that point, I don’t see why they would hesitate to take such action. Many countries routinely spend billions of dollars developing nuclear weapons because they have made up their minds that it’s essential for national security. Putting some stuff in the stratosphere would be much easier and cheaper than that. So, I doubt that it will be a lone billionaire but I wouldn’t be surprised to see a national government attempt it.

Check Out Some of Neal’s Other Works